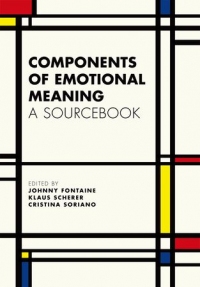 The present book represents the outcome of several years of international interdisciplinary collaboration in the framework of the GRID project.

It reports an extensive cross-cultural and cross-linguistic study on the meaning of emotion words adopting a novel methodological approach. Based on the Component Process Model a new instrument was developed to assess the meaning of emotion terms. This instrument, the GRID questionnaire, consists of a grid of 24 emotion terms spanning the emotion domain and 142 emotion features that operationalize five emotion components (Appraisals, Bodily reactions, Expressions, Action tendencies, and Feelings). For the operationalization of these five emotion components very different emotion models from the Western and the cultural-comparative emotion literature have been taken into account. The book reports the empirical results obtained with this instrument in 34 samples representing 27 countries and 23 languages. It is demonstrated that the semantic space covered by the emotion terms can be adequately represented by a four-dimensional structure, namely by VALENCE, POWER, AROUSAL, and NOVELTY. This factor structure can be used as a point of reference to study meaning differences between cultural and linguistic groups. As the GRID instrument integrates very different emotion theories from different scientific disciplines, the instrument lends itself to multidisciplinary research and exchange. In addition to a presentation of the overall emotion meaning structure emerging across the cultural and linguistic groups, contributions from psychological, cultural-comparative, and linguistic perspectives demonstrate how the new instrument can be used to empirically study very different research questions on the meaning of emotion terms. The implications of the results for major theoretical debates on emotion are also discussed.

Click below for descriptions of the various chapters and the supplementary materials to the printed content of the book.

General introduction: A paradigm for a multidisciplinary investigation of the meaning of emotion terms

Chapter 5 :The why, the what, and the how of the GRID instrument

Chapter 7 :The global meaning structure of the emotion domain: Investigating the complementarity of multiple perspectives on meaning

Chapter 8 :From emotion to feeling: The internal structure of the Feeling component

Chapter 10 :The "mirror of the soul": The Expression component

Chapter 11 :Emotion is for doing: The Action tendency component

Chapter 14 :The new novelty dimension: Method artifact or basic dimension in the cognitive structure of the emotion domain?

Chapter 15 :From meaning to experience: The dimensional structure of emotional experiences

Chapter 20 :The conceptualization of despair in Basque, Spanish, and English

Chapter 21 :Finno-Ugric emotions: The meaning of anger in Estonian and Finnish

Chapter 22 :Types of anger in Spanish and Russian

Chapter 23 :What the GRID can reveal about culture-specific emotion concepts: a case-study of Russian “toska”

Chapter 24 :Pride is not created equal: Variations between Northern and Southern Italy

Chapter 25 :The meaning of pride across cultures

Chapter 26 :Cultural differences in the meaning of guilt and shame

Chapter 28 :Conceptual Metaphor Theory and the GRID paradigm in the study of anger in English and Spanish

Chapter 31 :The GRID Study in India

Chapter 32 :Adaptation of the GRID instrument in Setswana

Chapter 33 :Comparison of the arousal dimension in Turkey and the USA

Chapter 34 :Familiarity and disappointment: A culture-specific dimension of emotional experience in Greece?

Chapter 35 :The meaning of happiness in Japan and the United States

Chapter 36 :Happiness and contentment in English and Polish

Chapter 37 :Exploring the meaning of pride and shame in Hong Kong-Chinese

Chapter 38 :The meaning of Dutch “schaamte” as a single term for shame and embarrassment

Chapter 40 :The vocal expression component in the meanings of Russian, Ukrainian, and US English emotion terms

Chapter 43 :Where do emotional dialects come from? A comparison of the understanding of emotion terms between Gabon and Quebec

Chapter 44 :CoreGRID and MiniGRID: Development and validation of two short versions of the GRID instrument