Heavy particles such as gravitons or new vector bosons can decay to two vector bosons (WW, WZ or ZZ), each of them decaying in two-jets. Given the large mass of the hypothetical mother particle, the decay products of each of the two bosons would be boosted in the lab frame and would give rise to very collimated two-jet systems, i.e. a large-radius or "fat" jet hard to distinguish from a single jet. These topologies are tagged using a variety of substructure techniques, thus drastically reducing the di-jet background.

We consider this approach one of the strongest probe of new physics at the very high energy regime. Therefore, these searches have been the most significant area of interest in ATLAS data analysis of our group. Since 2012, we conducted studies of calorimeter effects, systematic uncertainties, signal sensitivities, and numerous analysis cross-checks. We evaluated and improved the performance of jet-substructure techniques and conducted an extensive survey of substructure algorithms and procedures, resulting in [EPJC 76(3), 1-47].

Jet substructure techniques become increasingly important in detailed studies of the Standard Model, among them the inclusive search for the Higgs boson produced with high transverse momentum decaying to a bottom-antibottom quark pair. In the past, ATLAS has mostly focused on the use of calorimeter-based jet substructure, which works well for jets initiated by particles with low to moderate boost, but which lacks the angular resolution needed to resolve the desired substructure in the highly-boosted regime.

We developed a novel approach, the Track-CaloClusters (TCC), designed to mitigate the calorimeter angular resolution limitations, thus providing better performance w.r.t. prior methods. Similar to previous methods, the superior angular resolution of the tracker is combined with information from the calorimeters. However, the new method is fundamentally different, as it correlates low-level objects as tracks and individual energy deposits in the calorimeter, before running any jet finding algorithms. 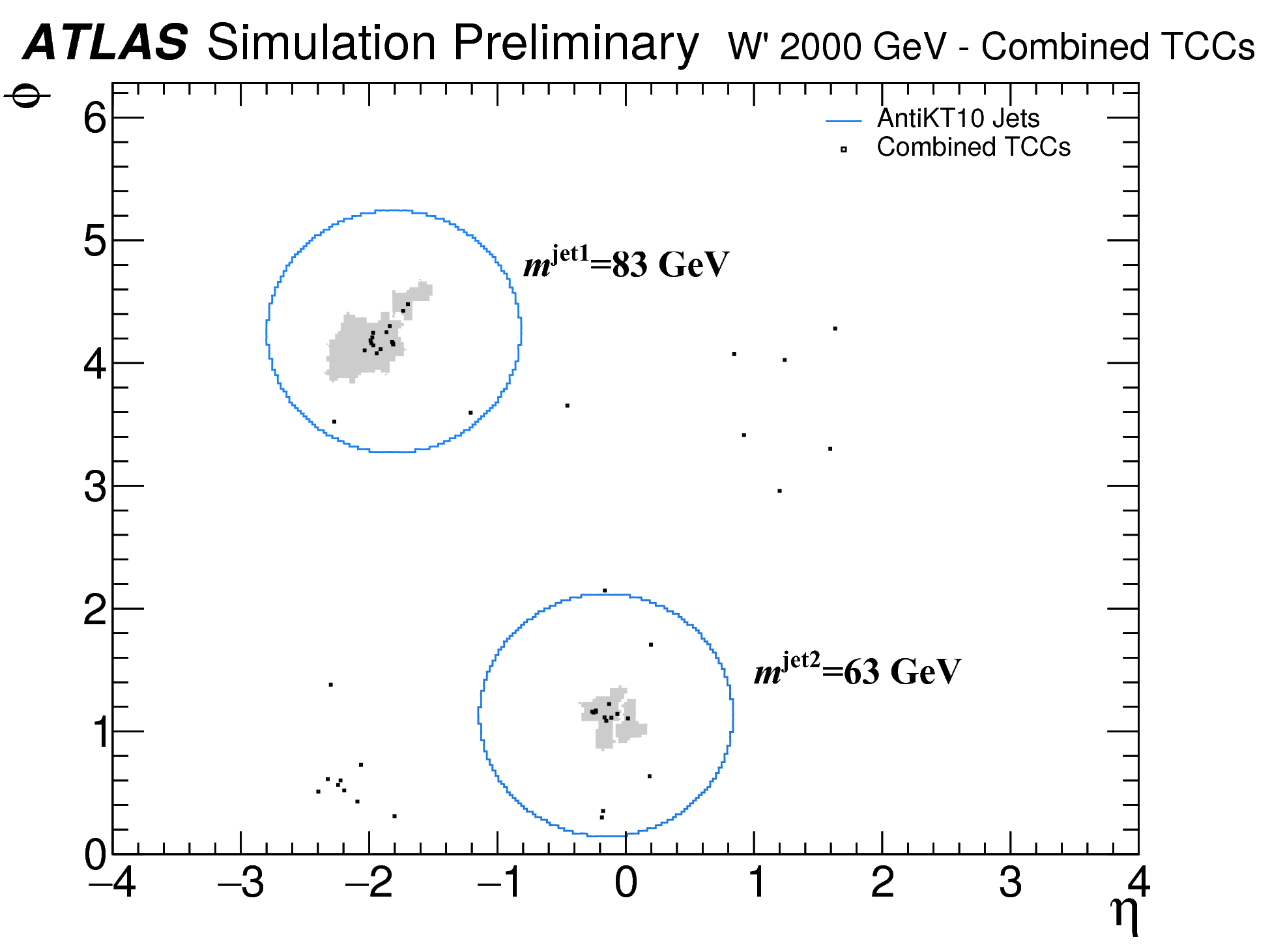 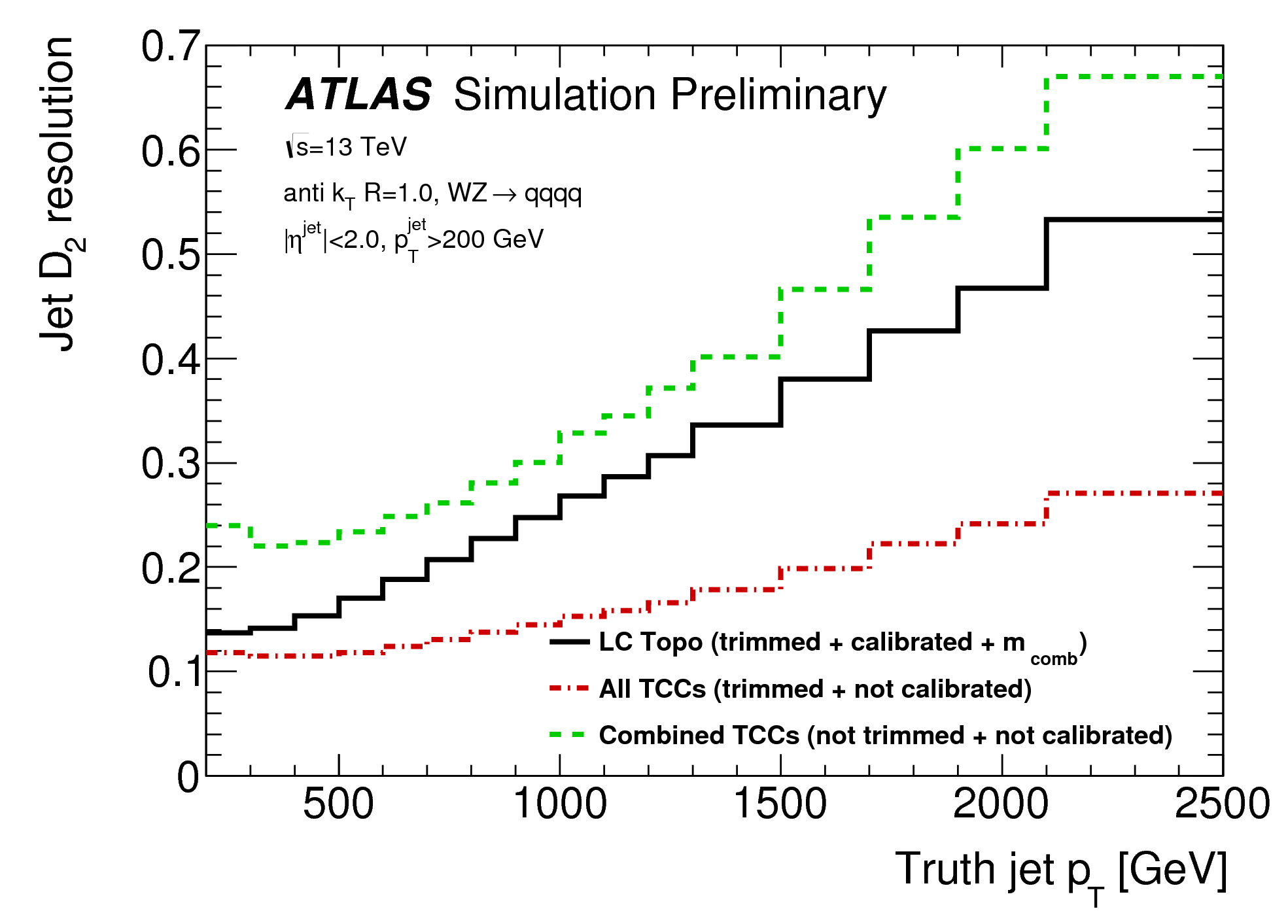 The figure above (left) shows single simulated W'→WZ→qqqq event with a W' mass of 2TeV, reconstructed using Track-CaloClusters. Two jets are shown, with their area demarcated by a blue circle, and with grey regions denoting the corresponding high energetic sub-jets. Due to the high resolution of the Track-CaloClusters, the two quarks in each blue circle can be resolved as sub-jets.

The resulting objects are used as inputs to jet reconstruction, and in turn result in improved resolution for both jet mass and substructure variables. The figure above (right) shows a comparison of the fractional jet D2 resolution for usual topo-cluster jets (solid black line), and jets built using the  Track-CaloCluster objects (dashed red line), as a function of transverse momentum. The Track-CaloClusters are seen to excel at high transverse momenta.

Track-CaloClusters are becoming a vital ingredient to the ATLAS physics program.

In case you are interested, please go to the page for experts.