The DPNC mechanical group together with engineers of the CERN-DT group have developed the Stiff Longeron for ITk Modules (SLIM) mechanics for the new ATLAS pixel detector for the High Luminosity LHC upgrade (data taking 2027-2036). This innovative mechanics is based on long rigid carbon-fibre staves (“longerons”) that can host two rows of silicon modules on the top and two rows on the bottom, and mounts inclined modules at large η to minimise the material crossed by particles. The SLIM was initially developed for HV-CMOS technology for the fifth pixel barrel layer, but has evolved to host all the five pixel layers and be compatible also with standard hybrid-sensor technology. The SLIM design allows for a reduction of the silicon surface by 32% and has been shown by full-simulation studies to improve the 1/pT and d0 resolutions of up to a factor of two at large η  for low pT values. The SLIM mechanics has been chosen for the outer layers of the ATLAS ITk Pixel detector, to be constructed for the High Luminosity LHC programme (data taking 2027-2036). Before starting the detector production, a full-size demonstrator, fully equipped, is under construction in collaboration with colleagues from CERN and from German, French and Japanese Institutes.

CAD model of the SLIM longeron fully populated with pixel modules on both top and bottom sides, showing the transition between the barrel modules and the inclined modules positioned at larger η. The stave-flexes run longitudinally along the longeron to drive the required signals to the detectors. Both barrel and inclined modules are electrically connected to the service-flex by means of kapton-flex pigtails. 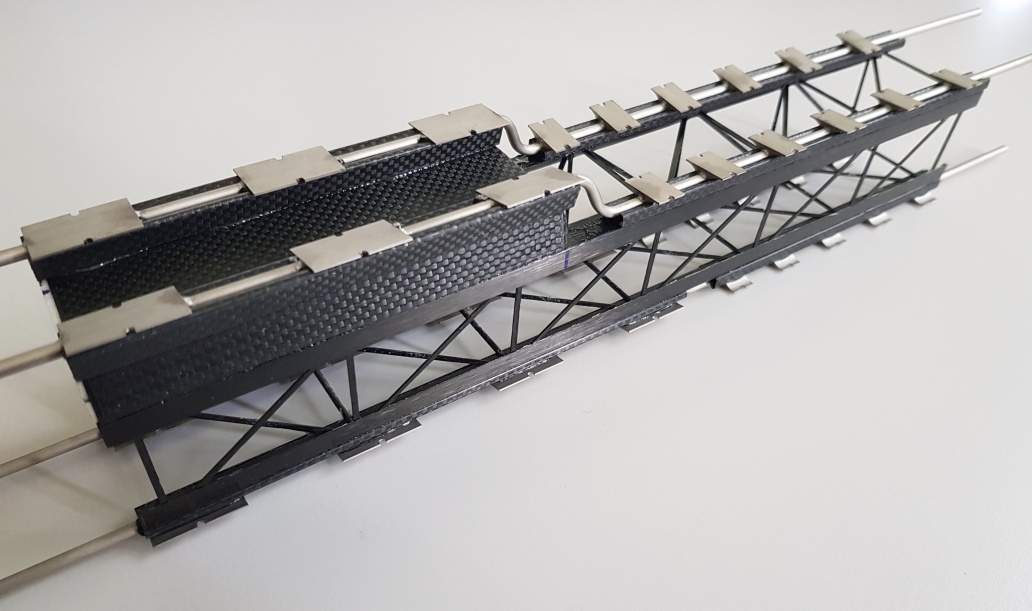 A prototype of a SLIM stave (also called longeron) in the DPNC laboratory, instrumented with titanium pipes and cooling blocks.