Cosmic rays are the most energetic particles observed in the Universe, reaching far beyond the energies of particles produced by man-made accelerators on Earth. More than one hundred years after their discovery, many questions related to these particles remain unanswered. Today, the DAMPE space mission, in which the Space Astroparticle Physics group at the Department of Nuclear and Particle Physics is a leading contributor, has just announced a new result in Science Advances, report the most precise direct measurement of the spectrum of the most abundant cosmic rays, protons, at energies reaching 100 TeV (teraelectronvolt).

The DAMPE measurement is an important step towards understanding a key puzzle concerning cosmic rays: what are the mechanisms behind cosmic ray production and propagation in the transition from the galactic to the extragalactic origin. In particular, for a long time, it is widely believed that galactic cosmic rays originate from supernovae explosions, which can presumably accelerate particles up to PeV energies. However, a plethora of cosmic ray measurements in the past decade challenges the conventional supernovae paradigm, suggesting that new physics process has to be involved in the galactic-extragalactic transition. The new DAMPE result brings a new insight into this enigma. In particular, it clearly indicates a characteristic change of the proton spectrum at 10 TeV, which was previously only hinted indirectly by other experiments (see the Figure). Comparing this result with the predictions of theoretical models will help pinpointing the underlying physics of cosmic ray production and propagation. Noteworthy, the proton spectrum observed by DAMPE, if extrapolated to higher energies, is too steep to match with the measurements of ground-based experiments beyond PeV. Therefore, there will likely be further hints of new physics in the form of spectral features in the 10 TeV – PeV region, which will be possible to uncover in the future with larger accumulated statistics with DAMPE, and with future space experiment such as HERD.

The DAMPE experiment is the space mission led by the Chinese Academy of Sciences. The collaboration includes leading institutes in China, Italy and the University of Geneva in Switzerland. The Space Astroparticle physics group in the Department of Nuclear and Particle Physics plays a leading role in the DAMPE collaboration. The group was responsible for the construction of the Silicon-Tungsten Tracker, a key sub-detector of DAMPE, and has directly contributed to this new proton spectrum measurements. Given the very successful operation of DAMPE experiment and the leading role of the group in shaping the roadmap of next-generation space missions, University of Geneva has a clear potential to remain a key player in space astroparticle physics in the upcoming decade.

Link to the article. 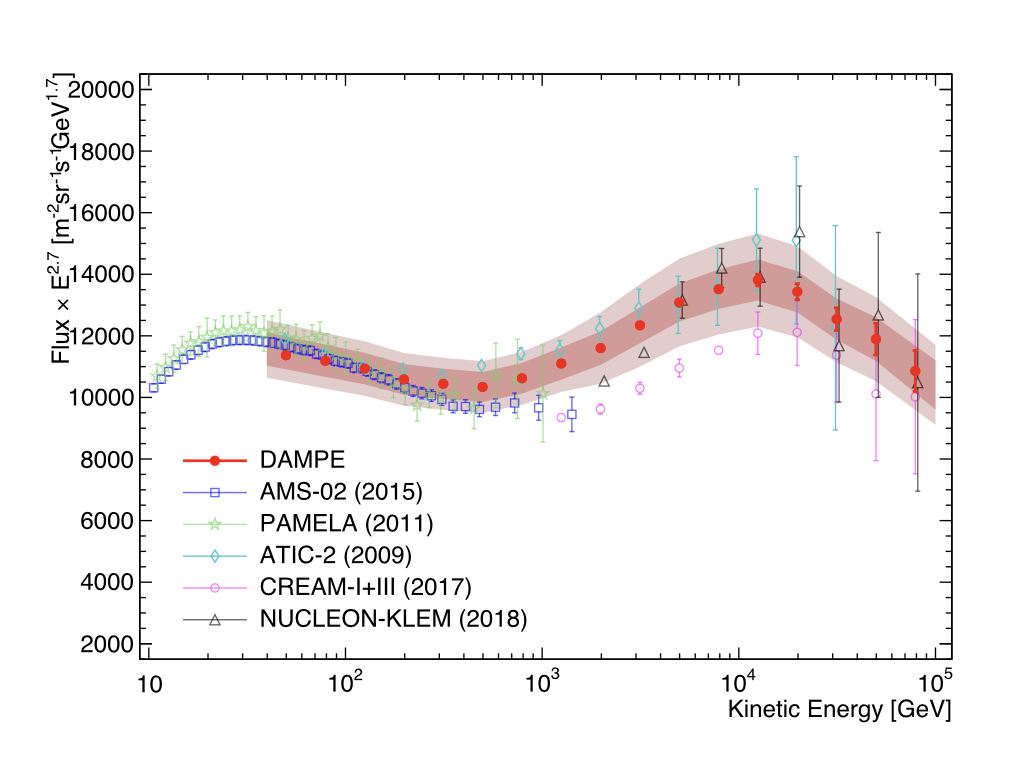 Cosmic ray proton spectrum from 40 GeV to 100 TeV measured with DAMPE (red points). The red error bars show the statistical uncertainties: the inner shaded band shows the estimated systematic uncertainties due to the analysis procedure; the outer band shows the total systematic uncertainties including those from the hadronic models. Results from previous experiments are shown as well. DAMPE is the first cosmic ray direct-detection experiment that spans more than 3 order of magnitudes in energy in its measurement.