The Alpha Magnetic Spectrometer (AMS), steadily acquiring cosmic-ray data on the International Space Station (ISS) since May 2011, has measured with percent-level accuracy the spectrum of fluorine nuclei in cosmic rays, providing for the first time the characterization of heavy secondary cosmic-ray spectrum, that is their intensity as function of energy (Figure 1). 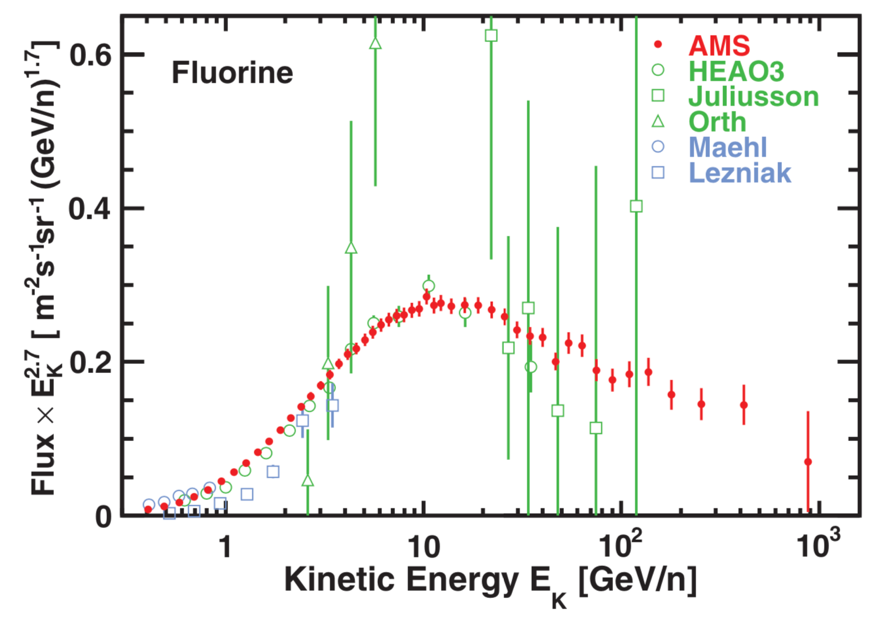 Figure 1 : The AMS cosmic-ray fluorine flux as function of kinetic energy per nucleon, EK,  multiplied by EK-2.7, together with earlier measurements.

The spectra of secondary cosmic rays and the secondary-to primary ratios, such as boron-to-oxygen or fluorine-to-silicon, are key observables for the understanding of cosmic-ray propagation in the interstellar medium.

Before AMS, only the spectra of the most abundant secondary nuclei were measured in a limited energy range and with large uncertainties. In particular, measurements of heavy secondary cosmic-ray fluorine nuclei were only performed up to kinetic energy per nucleon EK ~100 GeV/n and with errors exceeding 100% at 50 GeV/n. AMS is the first experiment to measure the spectrum of heavy secondary cosmic-ray fluorine nuclei (Z=9) up to the TeV/n and with accuracy of 5.9% at EK~ 50 GeV/n (Figure 1). 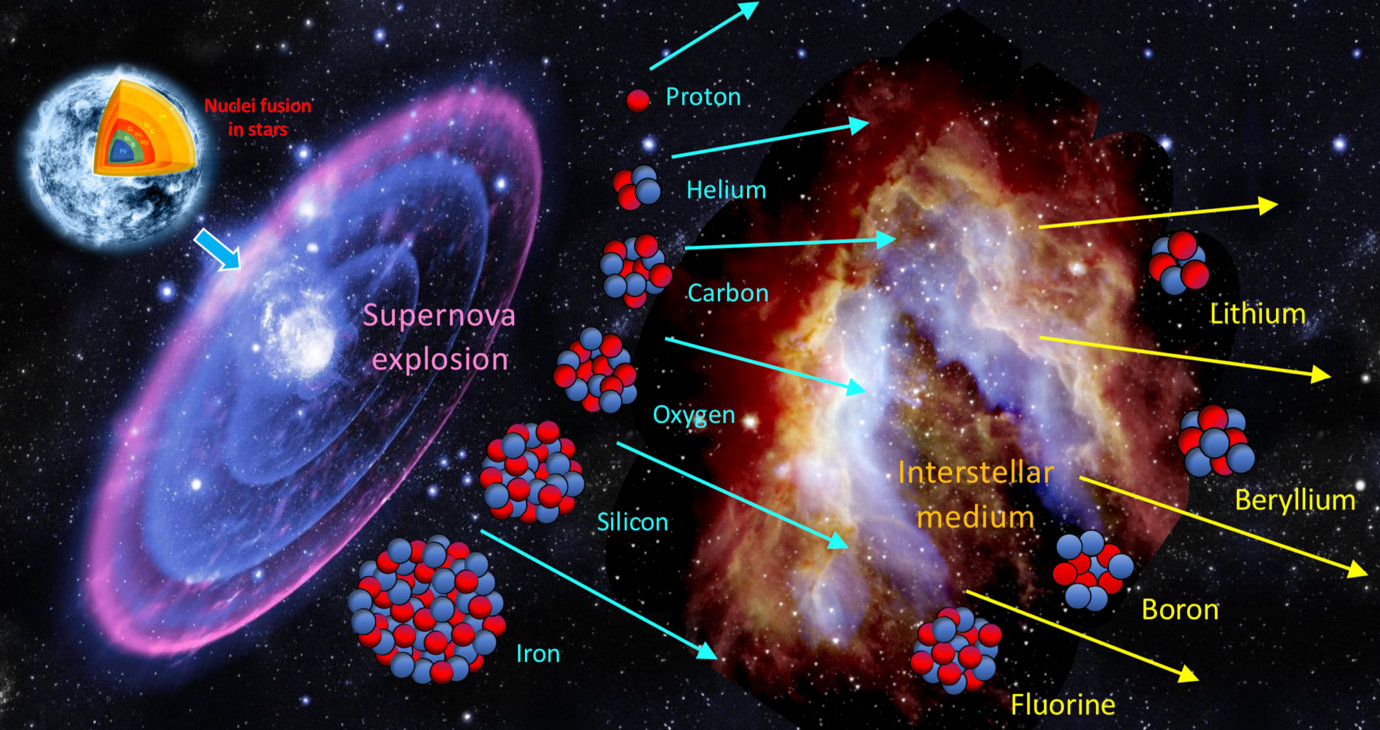 Boron nuclei (Z=5) are the most abundant secondary cosmic-ray nuclei (AMS Coll. Phys. Reports, 894, 1-116 , 2021),  therefore  the secondary-to-primary boron-to-carbon ratio is traditionally used to model the propagation of all cosmic rays.

The latest AMS result on heavy secondary cosmic rays shows for the first time that the heavy secondary-to-primary fluorine-to-silicon ratio has distinctly different energy dependence than the light secondary-to-primary boron-to-carbon (or boron-to-oxygen) ratio (Figure 3), therefore the propagation properties of heavy nuclei are different from those of light nuclei requiring a revision of cosmic-ray propagation models. 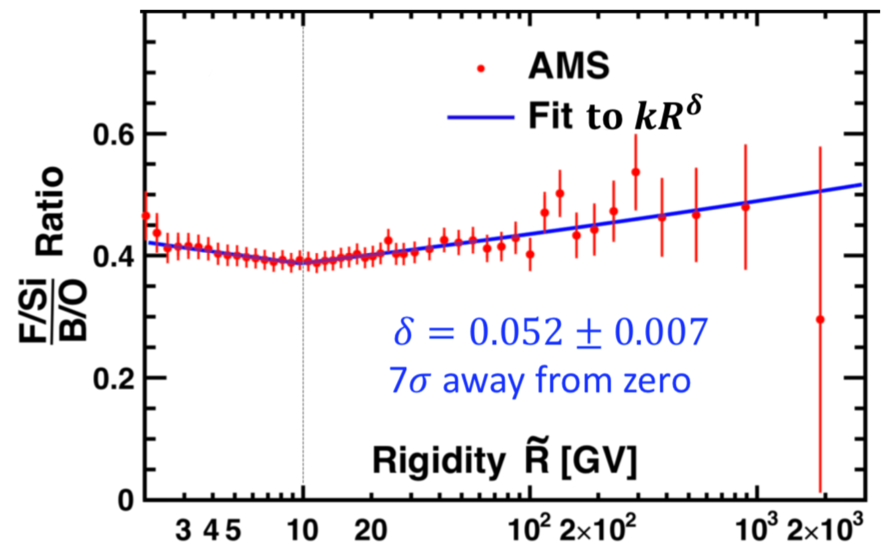 These new results are the outcome of data analysis work performed by the AMS group at the Department of Nuclear and Particle Physics of the University of Geneva, led by Dr Mercedes Paniccia, in collaboration with the Shandong Institute of Advanced Technology (SDIAT) in China. Other independent analyses have been performed by the AMS groups at MIT (US), CIEMAT (Spain) and INFN-Bologna (Italy) (Figure 4). 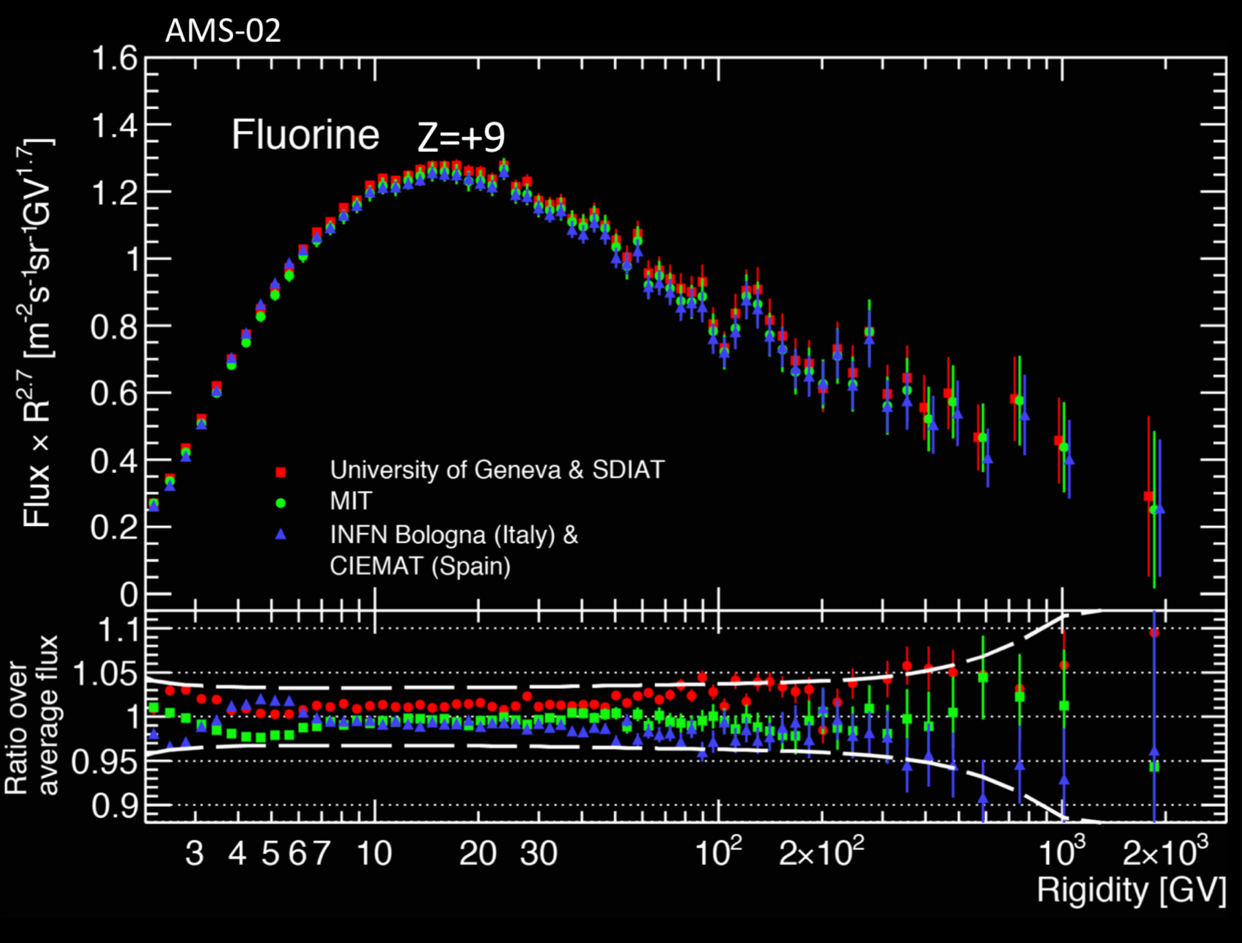 The AMS experiment will continue to take data for the entire ISS lifetime, up to 2030.