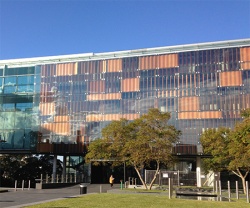 Following Geneva and Renmin, the University of Sydney hosted the third conference of the Universities of Geneva, Harvard, Renmin and Sydney (GHRS). The conference took place on 17 and 18 July on the theme New Directions in Dispute Resolution. Faculty was represented by professors Christine Chappuis, Jacques de Werra, Marc-André Renold, Gian Paolo Romano and by Alessandro Chechi (post PhD) and Julian Wyatt (PhD, lawyer).

The debate focused on the new trends in dispute resolution, starting with the well-known mechanisms in international trade and the role of courts. Dispute resolution in family matters and in specific areas such as art, medical tourism, aboriginal rights, labor law, intellectual property and securities was extensively discussed, as well as alternative modes of dispute resolution involving States, and followed by a general debate that allowed crossing the approaches and identifying new directions. The exchanges were further enriched by the addition of Africa represented by a colleague from University of Cape Town (South Africa) to the original four continents.

The first conferences were held in Geneva in January 2013 and in Renmin in July 2014. Harvard Law School will be hosting the next meeting in 2017.

More details on the 2015 conference on the Renmin Law School’s website. 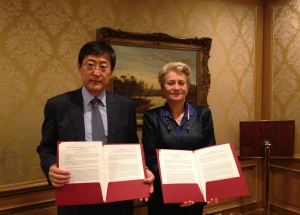 (+)
The Faculty of Law of the University of Geneva and Renmin Law School took advantage of this meeting to conclude two cooperation agreements. The first one is an exchange agreement that aims at strengthening and developing the cooperation between the two entities through the exchange of students, professors and doctoral students, as well as the organization of joint classes in the field of international and comparative law. The second one is a special agreement on "Innovative Talents Training Project" which will enable students of the Law School of Renmin to follow the courses of our Faculty Masters programs for a year. These agreements are as promising for the Faculty as they are for the University of Geneva. 23 septembre 2015   2015