9 octobre 2018: The European Union and the Mediterranean : Current Challenges and Perspectives 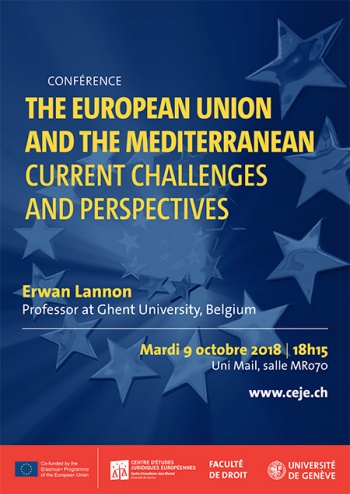 The EEC developed for the first time a proper (Global) Mediterranean Policy in 1972 that was renovated in 1992 and then replaced, in 1995, by the then new European Union and its partners, with the Euro-Mediterranean Partnership (EMP).

With the launching of the European Neighborhood Policy in 2007 the EMP was progressively diluted in this overarching framework. The creation of the Union for the Mediterranean in 2008 did not changed the situation as it mainly concentrated on labelling projects.

Given the current challenges, including migratory pressures and conflicts, the 2016 EU global strategy linked the Mediterranean to Africa and the Middle East.

In 2018 the perspectives are however still unclear as the debate on the future financial perspectives is raising a number of issues such as the future of EU-Africa relationships.

The purpose of this conference is therefore to give an overview of the different options that could be envisaged after 2020. An important step in this direction is the recent proposal of the French president to organize, in 2019 in Marseille, a Euromed Summit.

The European Union and the Mediterranean : Current Challenges and Perspectives