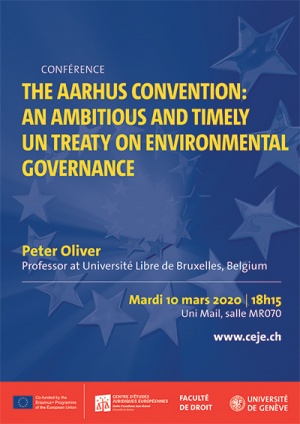 The Aarhus Convention was signed in Denmark’s second city in 1998 and came into force in 2001.  Currently, there are 47 Contracting Parties, including the EU and all its Member States.  Switzerland joined in 2014, the last Party to do so. The Convention was negotiated under the auspices of the UN’s Economic Commission for Europe, but some of the Parties are in Central Asia.

The Convention, which aims to promote good governance in environmental matters, is composed on three “pillars”: (i) access to environmental information, (ii) public participation in projects with a significant impact on the environment (essentially environmental impact assessment) and (iii) access to justice. Peter Oliver will speak about “pillars” (i) and (iii), focusing on the case law of the Aarhus Convention Compliance Committee (of which I am a member) and the Court of Justice of the EU. 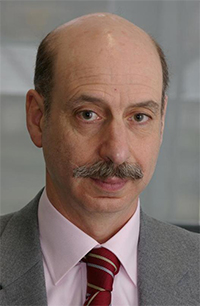 Until 2014, Peter Oliver was a Legal Advisor in the European Commission, and was also briefly a référendaire (law clerk) to Advocate-General Gordon Slynn at the Court of Justice of the EU and a Visiting Fellow at Yale University.  In his last few years in the Commission, he worked on the Aarhus Convention.   He is a Visiting Professor at the Université Libre de Bruxelles, a member of the Aarhus Convention Compliance Committee and the author of over 80 publications on EU law, including Free Movement of Goods in the European Union (5th ed., Hart Publishing, 2010). His forthcoming book is entitled The Fundamental Rights of Companies – European and US Law Compared (Hart Publishing). He is a barrister at Monckton Chambers and a member of the French-language Brussels Bar.  He has spoken on Brexit on BBC Radio 4’s Today Programme and on Sky News.