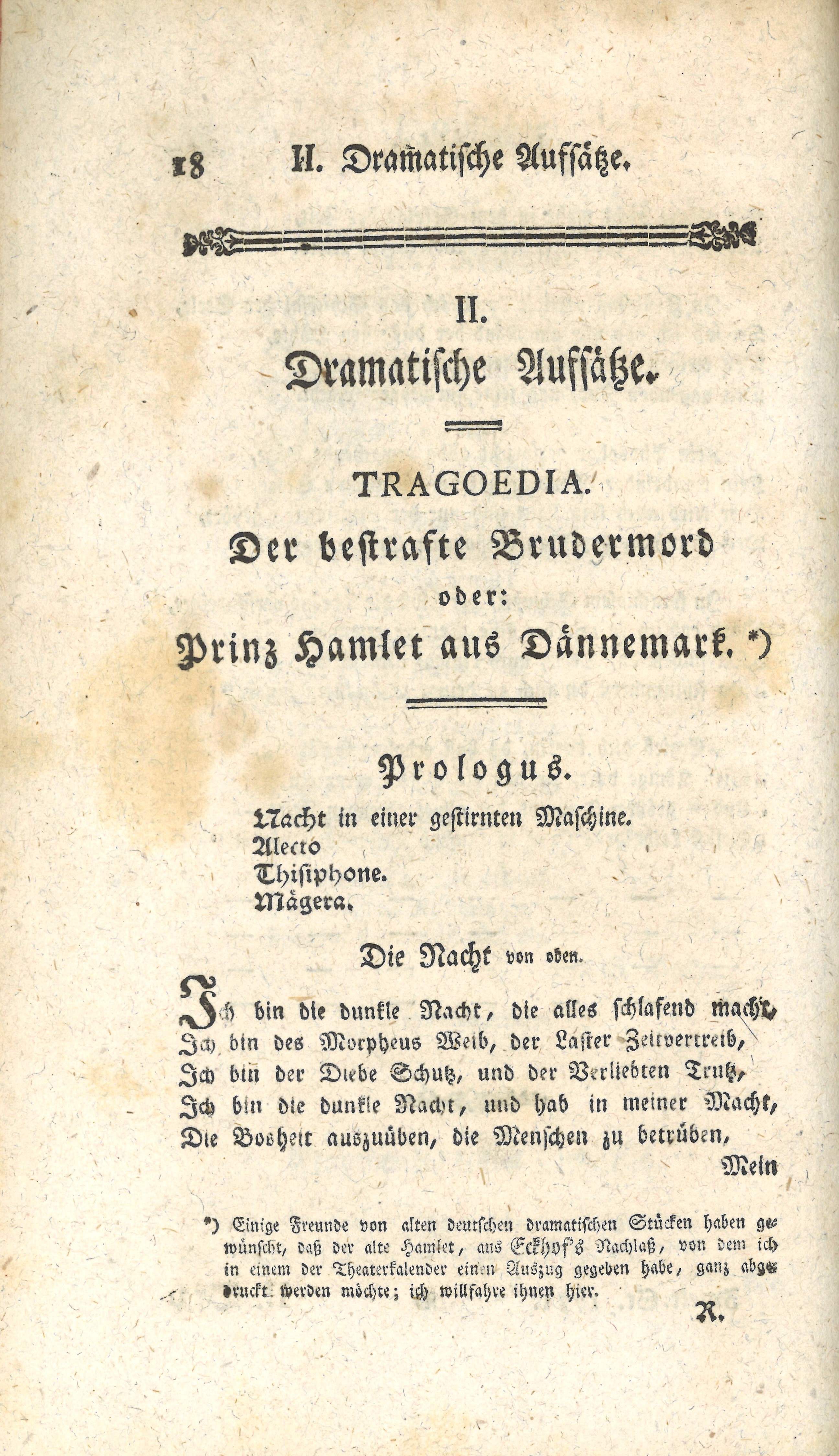 Der Bestrafte Brudermord did not appear in print until 1781, based on a now lost manuscript dated 1710, although it is clearly of much earlier origin. As the introduction to our edition argues in some detail, English itinerant players seem to have produced a radically streamlined version of Hamlet shortly after the turn of the seventeenth century, which reduced the play to little more than the bare bones of its plot. The presence of passages that correspond to material exclusive to the first quarto (1603) and the nature of the adaptation, which avoids complex verbal contents, suggests that this popularizing adaptation was undertaken at a time when the players still performed in English to spectators who did not understand the language. Much later in the seventeenth century, probably in the 1660s, the play seems to have been adapted for performance by the company of Carl Andreas Paulsen, accounting for the rather impressive Prologue, which repeatedly draws on the seventeenth-century German poet and dramatist Andreas Gryphius, and the First Player sequence, in which Prinzipal Carl, as the character is called in the German play, is a barely disguised topical portrait of Paulsen himself.

1.1 Relief of the guard. The parting guard is afraid of the Ghost.

1.2 The Ghost appears and gives the guard a box over the ears.

1.3 Horatio, Francisco, and soldiers join the guard. The Ghost reappears.

1.4 Hamlet joins the guards and is told about the Ghost resembling his father.

1.5 The Ghost tells Hamlet that he was murdered. Hamlet swears revenge.

1.6 Hamlet (and the Ghost’s voice) make the guards swear to keep silent. Hamlet repeats the Ghost’s story to Horatio.

1.7 The King announces his marriage to the Queen, and both ask Hamlet not to go to Wittenberg. He agrees to stay. Corambus confirms that Leonhardus went to France with his consent.

2.1 The Queen is sad because of Hamlet’s melancholy. The King promises that his doctors will look after him.

2.2 Corambus announces to the King and Queen that Hamlet is mad.

2.3 Ophelia complains that Hamlet plagues her. The King and Corambus plan to observe the two lovers.

2.4 Ophelia returns a token to Hamlet. He tells a story about women’s art of make-up and instructs her to go to a cloister. The King believes Hamlet’s madness to be simulated.

2.5 Hamlet reaffirms his desire for revenge. Horatio cautions that the Ghost may have betrayed him.

2.6 Corambus announces the comedians. Hamlet plans to use a play to verify the Ghost’s tale and test the King.

2.7 Carl and the comedians arrive. Hamlet gives them acting advice and asks them to perform a play about one brother poisoning the other in a garden. Hamlet tells Horatio the story of a wife confessing the murder of her husband, prompted by a theatre performance. He asks Horatio to observe the King.

2.8 The King, the Queen, Hamlet, Horatio, Corambus, and Ophelia prepare for the performance. Hamlet comments on the dumb show, and the King breaks off the performance and leaves. Hamlet triumphs.

2.9 Hamlet tells Corambus to treat the comedians well. He then repeats his vow of revenge to Horatio.

3.1 The King prays for forgiveness.

3.2 Hamlet enters, ready to kill the King, but then decides to spare him for the time being. The King decides to do further penance.

3.3 Corambus confirms to the Queen that Hamlet’s madness remains unchanged.

3.4 Horatio announces Hamlet to the Queen. Corambus hides behind a tapestry.

3.6 The Ghost appears. The Queen does not see him. Hamlet leaves in disgust. The Queen laments her re-marriage and the unfortunate consequences it has had on her son.

3.9 Ophelia, in her madness, mistakes Phantasmo for her sweetheart. Phantasmo agrees to help Jens.

3.10 The King laments Corambus’ murder and sends Horatio to arrange the funeral. Hamlet apologizes. The King decides to send Hamlet to England, instructing the two servants who accompany him to kill Hamlet.

4.1 The two bandits intend to kill Hamlet. He tricks them into shooting each other, discovers his death warrant, and decides to return to Denmark.

4.2 The King enquires about Hamlet.

4.3 Phantasmo announces that Leonhardus has returned from France.

4.5 Phantasmo announces Hamlet’s return. The King convinces Leonhardus to kill Hamlet in a duel with a poisoned rapier and poisoned wine.

4.6 The Queen announces that Ophelia is mad.

4.7 The mad Ophelia distributes flowers. The King assures the Queen that his doctors will take care of Ophelia and reminds Leonhardus of their plan.

5.1 Hamlet returns and reaffirms his vow of vengeance.

5.2 Hamlet narrates his escape from the bandits to Horatio.

5.3 Phantasmo announces the planned duel with Laertes. Hamlet ridicules Phantasmo in front of Horatio. After accepting the challenge, Hamlet faints. He nevertheless decides to participate in the duel.

5.4 The King and Leonhardus prepare for the duel.

5.5 Hamlet enters and they discuss the modalities of the duel.

5.6 The Queen announces Ophelia's suicide. In the duel, Hamlet and Leonhardus mortally wound each other. The King orders Phantasmo to fetch the poisoned wine, which the Queen drinks. The Queen dies. Hamlet stabs the King. Leonhardus asks Hamlet for forgiveness and dies. Hamlet stabs Phantasmo. Hamlet asks Horatio to bring the crown to Fortempras of Norway. Hamlet dies. Horatio concludes the play with a lament and a didactic epilogue.