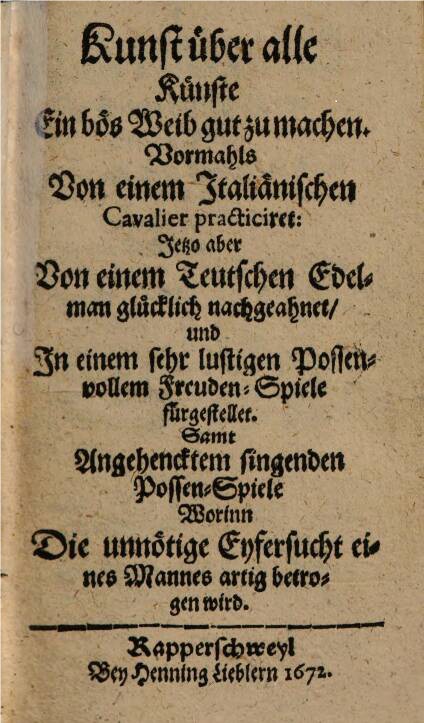 Please click here to see a draft version of a sample scene.

The plot of Kunst über alle Künste is largely identical with that of Shakespeare’s Taming of the Shrew, although the German text eliminates the Christopher Sly Induction, streamlines some passages, such as the business about Lucentio’s pretended father in Acts 4 and 5, transposes a few plot elements, and assigns different names to many of the characters: Sabina for Bianca, Theobald for Baptista, Johannes for Lucentio, and so on. The text is close to Shakespeare’s and contains many obvious echoes of it. Indeed, the relationship is such that Kunst can in some ways be considered a version of The Taming of the Shrew.

Kunst was published in 1672 in duodecimo format. Two early editions survive, with the same imprint: ‘Rapperschschweyl / Bey Henning Lieblern 1672’. ‘Rapperschschweyl’, which seems to refer to the Swiss town of Rapperswil, is in fact a fictitious place of publication, and ‘Henning Lieblern’ a fictitious publisher’s name; the play was probably published in Frankfurt. Since 1672, the play was only edited once prior to our edition, in 1864, and had never been translated into English. 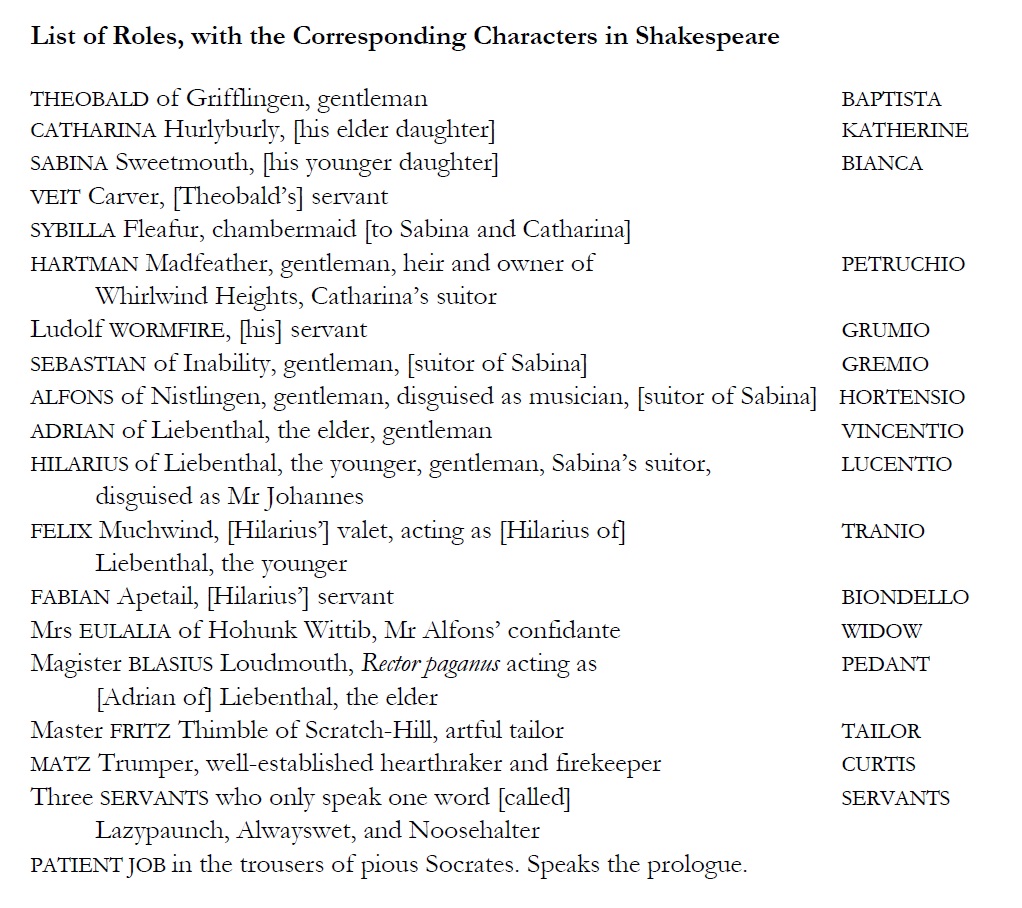 Prologue A prologue laments the lot of husbands who have shrewish wives and invites the male viewers to learn how to tame them by watching what follows.

1.1 Sir Theobald dissuades young Alfons and old Sebastian, suitors to his daughter Sabina, from any further wooing, since a suitor needs to be found for his eldest daughter, Catharina, first. Catharina feels insulted and quarrels with the men. Once alone, Alfons and Sebastian plot to ‘liberate’ Sabina by finding a husband for Catharina.

1.2 Hilarius, another suitor to Sabina, has exchanged clothes with his valet, Felix, in order to pose as Johannes, so that he can post as tutor to Sabina and woo her in secret, whilst Felix is to impersonate Hilarius to Theobald. Another servant, Fabian, arrives and marvels at the transformation.

1.3 Hardman arrives at Alfons’s residence with his servant, Wormfire. Upon being told about Catharina, Hardman decides to woo and tame her. Alfons asks Hardman to introduce him into Theobald’s house as a music teacher so that he may woo Sabina. Sebastian enters with ‘Johannes’ (who pretends to woo on Sebastian’s behalf), and the old man is persuaded to sponsor Hardman’s wooing of Catharina. Felix (as Hilarius) presents himself as another rival suitor to Sabina.

2.1 Catharina physically attacks her sister before Theobald and the suitors arrive and introductions are made. Once they are alone, Hardman begins to woo Catharina, and pretends that they have agreed to marry when the other characters re-enter. Felix (as Hilarius) and Sebastian put themselves forward as suitors to Sabina, and exchange insults. Theobald promises Sabina to Felix.

2.2 In a soliloquy Wormfire mentions that Catharina and Sabina’s chambermaid, Sybilla, has agreed to have an affair with him in the event that Catharina marries Hardman.

3.1 Johannes and Alfons set about tutoring Sabina in poetry and music. Veit, Theobald’s servant, observes Sabina and her poetry ‘tutor’, remarking to Alfons that romance is budding between them.

3.2 Catharina expresses her fears about her impending marriage to a ruffian who has seemingly abandoned her. Hardman and Wormfire arrive in outlandish attire and the marriage ceremony takes place, during which Hardman reportedly abuses the priest. Despite Catharina’s protestations, Hardman departs hurriedly with his new wife. Fabian reveals to Veit the real identity of Johannes.

3.3 Wormfire is sent ahead to prepare the house for his master and mistress. He recounts the difficult journey through the cold and wet, during which his mistress fell into the mud. Hardman, Catharina, and Sybilla arrive, and Hardman sets about berating the servants over trivial matters. The firekeeper, Matz, and Wormfire comment on Hardman’s method of taming Catharina, namely not letting her eat or sleep.

3.4 Hardman reflects on his taming methods. He comments about Catharina’s confusion at his outbursts of rage mixed with shows of affection.

4.1 Felix and Alfons hide and watch Sabina and Johannes flirt and kiss. Alfons is disheartened and plans to marry a rich young widow instead. Fabian reveals that he has found someone (Blasius) to impersonate the suitor’s father (since Theobald requires the father’s consent before a contract of marriage is made).

4.2 Wormfire and Sybilla enjoy some food and drink, and observe that they will need to get married once she becomes pregnant. Catharina asks for some food, but there is nothing left. Hardman and Alfons enter with food, which she is denied, and a tailor arrives to show his wares. Catharina praises the wares but Hardman insults the tailor for his supposedly poor-quality garbs. Catherina and Hardmann set off for Sabina’s wedding without any new garments.

4.3 Felix and Blasius discuss how the latter will impersonate the noble father of Hilarius.

4.4 Hilarius’s real father, Adrian, worried about not having heard from his son, comes looking for him. Hardman tests Catharina by alleging the moon is shining while it is broad daylight, to which Catharina first objects, but then agrees in order to placate him. They meet Adrian and Hardman makes Catharina greet him as a fair maiden to prove the point that he has tamed her wholly. Hardman tells Adrian that his son will be married. Adrian arrives at his son’s lodgings and quarrels with Blasius and Felix, who are impersonating him and Hilarius. Thinking that the pair have murdered his son, Adrian falls into a swoon and the impostors flee. Hardman and Catharina arrive, and the tamer demonstrates that his wife is finally brought under his control by making her kiss him in public. They agree to leave off their eccentricities and behave normally.

5.1 Adrian is devastated, supposing that his son is dead; Theobald is shocked that he had almost married his daughter to a conman. Both are relieved when Hilarius enters with Sabina, and celebrations ensue.

5.2 Blasius, Felix, and Fabian undergo a mock trial, but the judges prove merciful. Wormfire petitions to marry Sybilla, who is pregnant, and his request is granted. Hardman, Hilarius, and Alfons (who has married a widow) test the obedience of their wives by requesting that they come to them. Only Catharina obliges, and eventually makes the other women come too. Catharina offers a brief ‘lesson’ on female obedience. Wormfire, Sabina, and Fabian perform a poem/song on their fortunes.