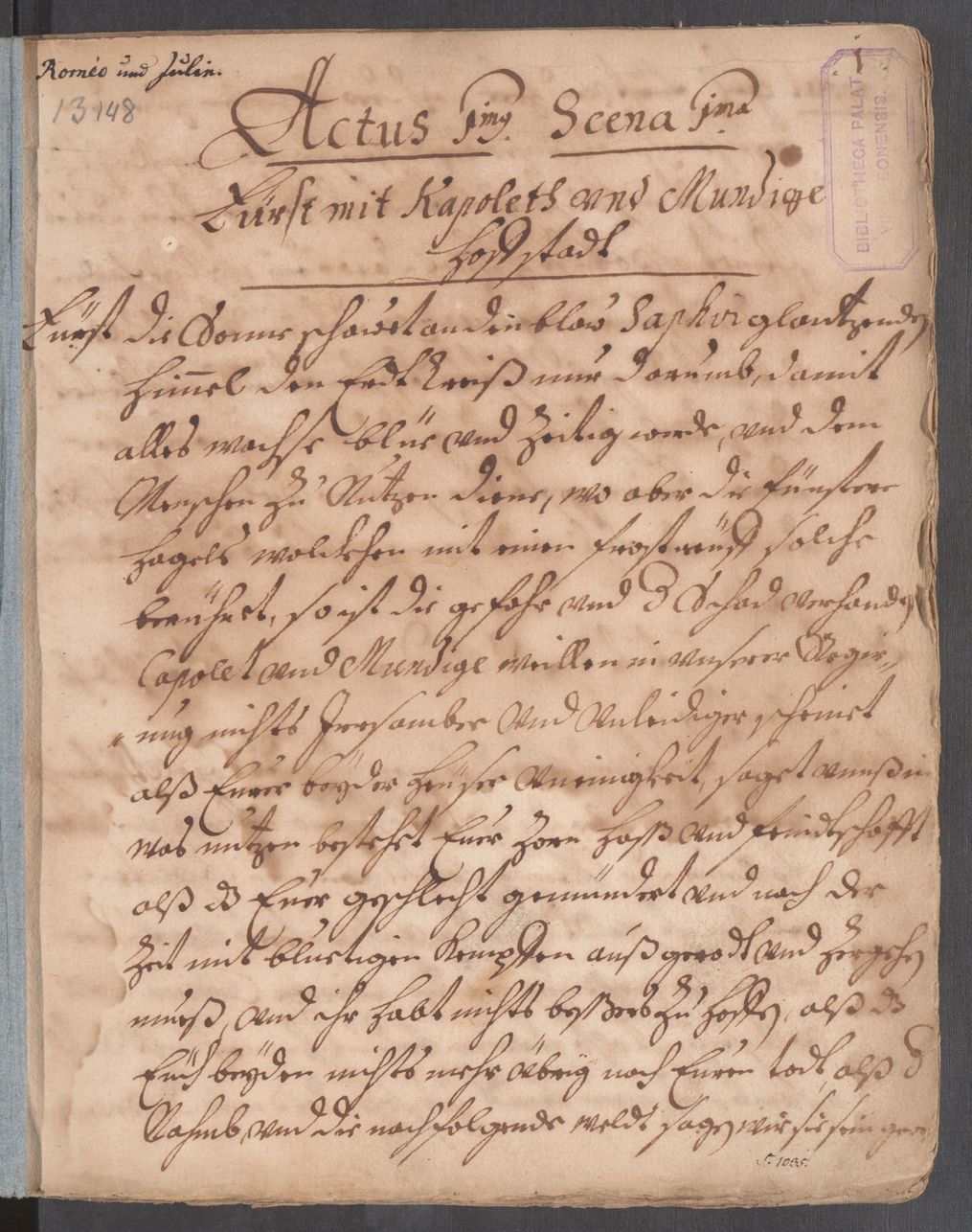 Romio und Julieta is about ten percent shorter than the first quarto version of Shakespeare’s play (1597), which is in turn twenty percent shorter than the second quarto (1599). The plot closely follows that of Romeo and Juliet, although most of Shakespeare’s soliloquies, a number of other set pieces, and the scene in Mantua (5.1) are notably absent. The German text is clearly based on the second quarto, a number of passages mirroring Shakespeare’s text almost word for word. The German version also contains a number of intelligent structural changes and additions. Its close engagement with Shakespeare’s play is highly illuminating.

The extant manuscript of Romio und Julieta (Austrian National Library, Vienna, Cod. 13148) is a clean copy and was probably produced by two professional scribes. It originated at the court theatre of Český Krumlov (Bohemian Krumlov) in ca. 1688, where the play was performed by the Eggenbergische Komödianten, Eggenberg’s Comedians, a company formed in 1675 and patronized by Prince Johann Christian I of Eggenberg (1641-1710) and his wife Princess Maria Ernestina (1649-1719). The extant text seems to be based on a version from earlier in the century. Versions of Romeo and Juliet are known to have been performed in Germany from the early seventeenth century, ‘Romeo vnndt Julitha’ being mentioned in the Bavarian city of Nördlingen as early as 1604.

1.1 The reconciliation between Capolet and Mundige, orchestrated by the Prince.

1.2 Julieta and the Nurse. Julieta laments being cooped up by her parents. She says she is in love but does not know with whom.

1.3 Paris and Capolet converse politely. Capolet gives Pickelherring a list of guests for his banquet the following day and asks him to invite them.

1.4 Romio pines for Rosalina, in presence of Penvolio. Pickelherring asks them to read his guest list. Romio tears up the list since he discovers Rosalina’s name on it, then he chases Pickelherring away. Romio and Penvolio decide to go to the feast. Pickelherring is looking forward to the banquet.

2.2 Capolet, his Wife, the Nurse, Tipold, Paris, and Julieta at table.

2.3 Capolet and Paris greet Romio and Penvolio. Romio and Julieta meet and fall in love. Romio learns about Julieta’s identity. Capolet prevents Tipold from affronting Romio. Romio and Penvolio leave although Capolet and Paris ask them to stay. Capolet tells Paris that peace between Mundige and him has not yet been proclaimed. Paris asks Julieta to follow him and her father. Julieta discovers Romio’s identity.

2.5 Romio, accompanied by a servant, ventures near the window of Julieta’s room. The servant sings a song. Romio and Julieta profess their love for each other until the Nurse interrupts them. Julieta gives Romio a love token and tells him that she will send someone to him the following morning.

2.6 Romio tells the Pater that he is no longer in love with Rosalina, but now with Julieta. The Pater sends Romio away with his best wishes, hoping for reconciliation between the two families.

3.1 Capolet’s Wife asks the Nurse whether Julieta is of age to be married.

3.3 Capolet agrees to give Julieta some time to consider the marriage.

3.4 Julieta tells the Nurse that she is in love with Romio. The Nurse first advises her to marry Paris but then agrees to help her. Julieta sends the Nurse to Romio, asking him to meet (and marry) her in the Pater’s cell at nine o’clock.

3.5 Mercutius and Penvolio talk about a challenge that Tipold sent to Romio. Romio joins them; they banter briefly.

3.6 The Nurse comes to tell Romio that he is to join Julieta for a meal. Mercutius leaves. Romio laments his loved one’s chastity (without naming her) in front of Penvolio, who decides to cure him.

3.7 The Nurse first teases Julieta and withholds Romio’s message, then reveals that he will come.

3.8 The Pater agrees to marry Romio and Julieta.

3.10 The Pater marries Romio and Julieta.

4.5 Romio grieves about his banishment. The Pater tries to calm him. Pickelherring brings a ring and letter from Julieta and asks Romio to visit her. The Pater assures Romio that once he is in Mantua, he will keep him informed by letter.

4.6 Julieta assures Romio that she is not angry with him. Romio and Julieta say their goodbyes.

5.1 In the presence of Pickelherring, who comments on the conversation, Capolet asks Julieta to ready herself for her marriage to Paris. Julieta says that she is ill and needs the Pater’s counsel. Capolet agrees, and the two men leave. Julieta laments her situation.

5.2 The Pater, after testing Julieta’s steadfastness, promises to bring her a sleeping potion that will make her seem dead. She will be buried in the monument, and Romio will come in disguise to abduct her. Julieta agrees.

5.3 In the presence of Capolet’s Wife, the Nurse and Pickelherring quarrel. The Nurse goes to wake Julieta and returns with the news of her "death". Pickelherring confirms this. Capolet and the Pater arrive, and all join in the lamentation.

5.4 Paris arrives at the monument with a page. His mourning is interrupted by Romio. When Paris challenges Romio, Romio kills him. Romio stabs himself. Julieta awakes, sees the two dead bodies, and stabs herself. The Pater arrives and laments the dead. The Prince and Capolet arrive. The Pater tells them what has happened, and they forgive him. The three lament youth’s and love’s rashness and folly. Capolet decides to bury Paris in the same grave as Julieta.