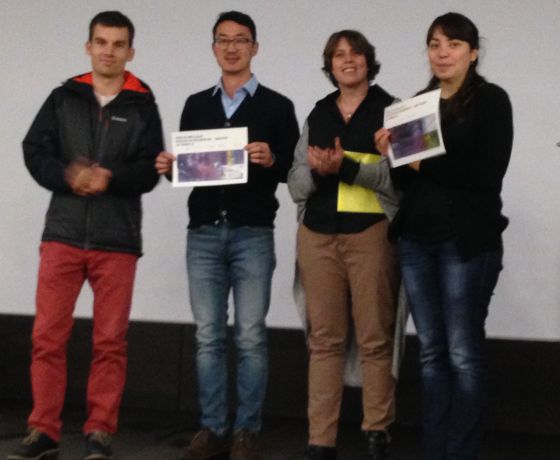 Following the enviroGRIDS European project that modeled water resources in the entire Black Sea catchment (2.2 mi. km2) for the first time using the Soil and Water Assessment Tool, we are exploring in this work how we can transform this initial effort into an ecosystem services assessment. Two international commissions in the region focusing on the Danube River and the Black Sea are directly concerned by the water quantity and quality reaching this almost closed sea. Their concern typically translates into services such as water yield, sediment and nutrient retentions. These services were assessed using the InVEST package developed by the Natural Capital Project. The outputs of these analyses are presented as large-scale maps at 270m resolution and analyzed by countries and by sub-catchments. The created datasets will be shared on the enviroGRIDS geoportal (portal.envirogrids.net) as open data available to download or as web services. This brings a new regional contribution to the Global Earth Observation System of Systems that will remain in the future for other scientists and decision-makers to use and compare with their own results.

Case studies from lakes, rivers and marine coastal zones - all interlinked within the Rhône River catchment - exemplify current adaptations to environmental changes, their costs and consequences. Along the river, where several sectors were or are being "restored", questions arise about the sustainability of restoration and the need to tackle other aspects of the river function (i.e. sediment transport). In the coastal zone, the same concerns about sustainability and costs apply to recent structures built as protections against sea level rise. The case of lakes and their changes, questions the way we collect and analyse environmental data to detect, understand and communicate about environmental shifts.

Risk transfer mechanisms for climate extremes
Resilience to climate extreme events represents a major challenge for the sustainable development of human societies, especially now that the climate system is evolving at an unprecedented rate. Addressing this challenge requires understanding the physics and statistics of climate extremes as well as estimating their impact on human activities. Financial risk transfer to the insurance industry provides a global systemic response for climate risk management, in which reinsurance companies take the ultimate risk. In order to assess the economic impacts of climate extremes, these companies rely on the analysis of past events and the development of catastrophe models (CAT models).

City-making between standards, labels and quality assessment procedures. The case of eco-neighbourhoods.
Based on the case of eco-neighbourhoods, this communication explores the relationship of Swiss architects and urban planners to the standardisation and codification of city-making as a result of the principles of sustainable urban planning. First of all, the analysis considers the production of decision-making tools and labels capable of structuring the production of ecological neighbourhoods. The argument then covers the “consumption” of such tools by the builders of cities and regions. An attempt is made to understand how the users of such tools learn to outmanoeuvre the constraints facing them in order to make room for creativity. More broadly, the communication discusses issues of urban quality assessment, the inventiveness of the various participants in city-making and the relevance of the “model” concept in urban planning. The plan is to show that policy decision-making takes precedence over the principles and tools of governance originating from sustainable urban development. To that purpose, the analysis, which focuses on Switzerland, draws on research materials collected through semi-directive interviews using the “life story” method, adapted here to urban project narratives.

In February 2009, the European Commission decided to implement a planned phase out of inefficient (incandescent and conventional halogen) light bulbs (2009/125/CE and 2009/244/CE). Switzerland started its own policy measures a few months before those of the EU27-member body and later followed the EU’s line from September 2010.

This paper presents an analysis of the impact of this policy by analysing an energy efficiency program addressing low to medium income households. The analysis is founded on multiple surveys which took place from 2009 to 2014. An important component of this program is the replacement of inefficient incandescent and halogen lamps by efficient ones (CFLs and LEDs). Data concerning the replaced inefficient lamps has been gathered at every one of the campaigns carried out by the program. This allows for continuous information on the evolution of inefficient lighting equipment of dwellings for the last five years.

While the agenda of market withdrawal was precisely established, the phase out of inefficient lamps operating in households has an inherent inertia that appears to be more important than expected. Indeed, there is a significant number of incandescent lamps still operating in households. In addition, the main substitute for the banned lamps has become the halogen lamp. Our paper appraises the discrepancy concerning the evolution of the stock of inefficient lamps between the projections that were made in 2008 for the 2009/244/CEE directive and the real situation in households of the city of Geneva-Switzerland.

The first five stages of the regulation have already been implemented and it is likely that the outcome will influence the implementation of stage six.

Dr. David PARRA: Role of energy storage in the context of the Swiss nuclear phase-out (Anglais)

The need for and role of energy storage (ES) in new decarbonisation energy systems are discussed.  A uniform techno-economic and environmental assessment for electrical and thermal storage within the Swiss Competence Centre for Energy Research on Energy Storage is presented in addition to some results in battery and power to gas technologies. The key aspects of the methodology are: a) the definition of system boundaries including the ES unit, ES application and the economic/regulatory context; b) a time-dependent model accounting for variable renewable energy generation, demand load and energy prices; and c) the calculation of key performance indicators (KPIs).

Since the adoption of the United Nations Framework Convention on Climate Change (UNFCCC), various instruments have been adopted to address global warming. Many of those instruments are quite unique and show that adaptation to global environmental issues is also a question of adptation of legal and normative strategies to allow the international community to better deal with environmental changes. Climate change is a great laboratory to identify the types of instruments that could be designed in the international system to ensure more adpatation to environmental changes.

Flipped classroom: a few easy tips that improve the engagement among your students
The flipped classroom (cours inversé) is a pedagogical approach that asks students to acquire basic knowledge on their own, outside of classroom time. This allows face-time in class to be dedicated to clarifying and re-inforcing learning outcomes. A key element of this approach is setting up incentives to ensure that students are fully engaged in the process. In this talk, I will illustrate some first-hand experiences that resulted in dramatic improvement in student learning outcomes.”