How physical pain shapes social cognition. Disentangling the role of pain-specific and supramodal representations. Embodied models of social cognition argue that representations of first-hand sensorimotor experiences (such as physical pain) are re-enacted during the interaction with other people, for instance when we empathize with others' suffering or we witness unfair/ostracizing treatments. The goal of this project is to ascertain whether first-hand experiences influence social behavior through sensory-specific processes or supramodal representations of dimensions such as unpleasantness, which are common to many qualitatively different states.

Corradi-Dell'Acqua et al., 2011, J. Neurosci. The discovery of regions in the human brain (e.g., insula and cingulate cortex) that activate both under direct exposure to pain and when perceiving pain in others has been interpreted as a neural signature of empathy. However, this overlap raises the question of whether it may reflect a unique distributed population of bimodal neurons or, alternatively, the activity of intermingled but independent populations. We used fMRI on 28 female volunteers and used multivariate pattern analysis techniques to probe for more fine-grain spatial representations of seen and felt pain. Using a whole-brain approach, we found that only in the anterior insula (bilaterally) the distribution of cortical activity evoked by seeing another person's hand in pain was spatially similar to that of pain felt on one's own hand. Subsequent region of interest analyses also implicated the middle insula (right hemisphere) and the middle cingulate cortex. Furthermore, for the anterior insula, the spatial distribution of activity associated with one's pain also replicates that of the perception of negative but painless stimuli. Our data show how the neural representations of aversive events affecting oneself are also recruited when the same events affect others, and provide the stronger evidence thus far of a unique distributed cortical ensemble coding for aversive events regardless of the subject who is affected.

Corradi-Dell'Acqua et al., 2016, Nature Comm. The anterior insula (AI) and mid-anterior cingulate cortex (mACC) have repeatedly been implicated in first-hand and vicarious experiences of pain, disgust, and unfairness. However, it is debated whether these regions process different aversive events through a common modality-independent code, reflecting the shared unpleasantness of the experiences, or through independent modality-specific representations. Using functional magnetic resonance imaging, we subjected 19 participants (and 19 confederates) to equally unpleasant painful and disgusting stimulations, as well as unfair monetary treatments. Multivoxel pattern analysis identified modality-independent activation maps in the left AI and mACC, pointing to common coding of affective unpleasantness, but also response patterns specific for the events’ sensory properties and the person to whom it was addressed, particularly in the right AI. Our results provide evidence of both functional specialization and integration within AI and mACC, and support a comprehensive role of this network in processing aversive experiences for self and others.

Qiao-Tasserit et al., 2018, Neuropsychologia. People’s sensitivity to first-hand pain is affected by their ongoing emotions, with positive states (joy, amusement) exerting analgesic-like effects, and negative states (sadness, fear) often enhancing the subjective experience. It is however less clear how empathetic responses to others’ pain are affected by one’s own emotional state. Following embodied accounts that posit a shared representational code between self and others’ states, it is plausible that pain empathy might be influenced by emotions in the same way as first-hand pain. Alternatively, other theories in psychology suggest that social resources (including empathetic reactions) might be enhanced by positive states, but inhibited by negative states, as only in the former case one’s mindset is sufficiently broad to take into consideration others’ needs. To disambiguate between these opposing predictions, we conducted two experiments in which volunteers observed positive, neutral, or negative video clips, and subsequently either received painful thermal stimuli on their own body (first-hand pain), or observed images of wounded hands (others’ pain). We measured subjective pain ratings as well as physiological responses and brain activity using fMRI. We found that, contrary to the case of first-hand pain, others’ pain produced weaker galvanic responses and lower neural activity in anterior insula and middle cingulate cortex following negative (relative to neutral and positive) videos. Furthermore, multivoxel pattern analysis confirmed similar neural representation for first-hand and others’ pain in anterior insula, with representation similarity increasing the more the video preceding the observation of others’ suffering was positive. These findings speak against the idea that emotion induction affects first-hand and others’ pain in an isomorphic way, but rather supports the idea that contrary to negative emotions, positive emotions favors a broader access to social resources.

Antico et al. 2019, EPJ. Embodied models of social cognition argue that others' affective states are processed by re-enacting a sensory-specific representation of the same state in the observer. However, neuroimaging studies suggest that a reliable part of the representation shared between self and others is supramodal, and relates to dimensions such as unpleasantness or arousal, common to qualitatively-different experiences. Here we investigated whether representations of first-hand pain and disgust influenced the subsequent evaluation of facial expressions in modality-specific fashion, or in terms of unpleasantness or arousal. 30 volunteers were subjected to thermal painful and olfactory disgusting events, and subsequently were asked to classify computer-generated faces expressing pain (characterized by high unpleasantness and arousal), disgust (high unpleasantness and low arousal), surprise (low unpleasantness and high arousal), and hybrid combinations thereof. Thermal and olfactory events were associated with comparable unpleasantness ratings and heart rate (but stronger galvanic response was found for painful temperatures). Furthermore, we found that the appraisal of facial expressions was biased by the prior stimulus, with more frequent pain classifications following thermal stimuli, and more frequent disgust classifications following olfactory stimuli. Critically, this modulation was cross-modal in nature, as each first-hand stimulation influenced in comparable fashion facial traits diagnostic of both pain and disgust, without instead generalizing to features of surprise. Overall, these data support the presence of shared coding between one's aversive experiences and the appraisal of others' facial responses, which is best describable as supramodal representation of the unpleasantness of the experience.

Dirupo et al., 2020, Cortex. Embodied models of social cognition argue that others' emotional states are processed by re‐enacting a representation of the same state in the observer, along with associated somatic and physiological responses. In this framework, previous studies tested whether a strong sensitivity to interoceptive signals (i.e., inputs arising from within one's body) facilitates the understanding of others' affect, leading to mixed results. Such heterogeneity in the literature could reflect methodological differences in paradigms employed, with some probing classification of a precise condition, and others requiring the assessment of supra-ordinal dimensions orthogonal to many states. Here, we engaged fifty young women in a study where they evaluated others' naturalistic facial reactions to painful and disgusting stimuli of comparable unpleasantness. Separately, we measured their interoceptive abilities through a well-known heartbeat counting task. We found that individuals that were more accurate in tracking their heartbeats across time were also more prone to judge facial expressions as more unpleasant (supra-ordinal assessment). However, when specifically asked to discriminate between comparably-unpleasant pain and disgust (state-specific assessment), participants' performance was not influenced by their interoceptive abilities. Although confined to a female sample, this study extends our knowledge on the role of interoception in the understanding of others, which influences only the evaluation of general features such as unpleasantness (common between pain and disgust), without extending to the appraisal of a precise state. This finding supports multi-componential models of social cognition, suggesting that only part of our ability to assess others' affect is mediated by a representation of one's affective/somatic responses.

Antico et al., 2018, Cognition. Seminal theories posit that social and physical suffering underlie partly-common representational code. It is unclear, however, if this shared information reflects a modality-specific component of pain, or alternatively a supramodal code for properties common to many aversive experiences (unpleasantness, salience, etc.). To address this issue, we engaged participants in a gaming experience in which they were excluded or included by virtual players. After each game session, participants were subjected to comparably-unpleasant painful or disgusting stimuli. Subjective reports and cardiac responses revealed a reduced sensitivity to pain following exclusion relative to inclusion, an effect which was more pronounced in those participants who declared to feel more affected by the gaming manipulation. Such modulation was not observed for disgust. These findings indicate that the relationship between social and physical suffering does not generalize to disgust, thus suggesting a shared representational code at the level of modality-specific components of pain. 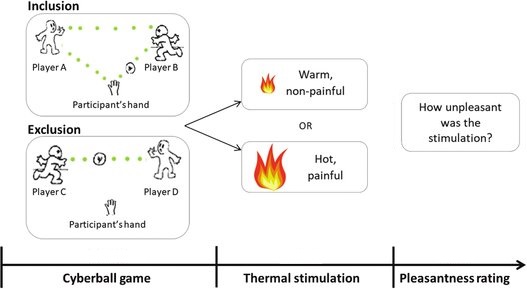 Olie et al., 2018, SCAN. Patients with borderline personality disorder (BPD) often engage in dangerous self-injurious behaviors (SIBs) as a maladaptive technique to decrease heightened feelings of distress (e.g. negative feelings caused by social exclusion). The reward system has recently been proposed as a plausible neural substrate, which may influence the interaction between social distress and physical pain processing in patients that engage in SIBs. Using functional MRI in 20 adult BPD patients with a history of SIBs and 23 healthy controls (HCs), we found a hyper-activation of the nucleus accumbens (NAcc) and amygdala when painful stimuli were presented to BPD patients (but not HCs) in a state of heightened distress, induced via social exclusion. This differential NAcc activity was mediated by anxious attachment style, which is a key developmental feature of the disorder. Altogether, these results suggest a neural mechanism underlying the pathophysiology of SIBs in these patients, which is likely reinforced via the reward system.

Sharvit et al., 2020, Science Advances. Embodied models suggest that moral judgments are strongly intertwined with first-hand somatic experiences, with some pointing to disgust, and others arguing for a role of pain/harm. Both disgust and pain are unpleasant, arousing experiences, with strong relevance for survival, but with distinctive sensory qualities and neural channels. Hence, it is unclear if moral cognition interacts with sensory-specific properties of one somatic experience or with supramodal dimensions common to both. Across two experiments, participants evaluated ethical dilemmas and subsequently were exposed to disgusting (olfactory) or painful (thermal) stimulations of matched unpleasantness. We found that moral scenarios enhanced physiological and neural activity to subsequent disgust (but not pain), as further supported by an independently-validated whole-brain signature of olfaction. This effect was mediated by activity in the posterior cingulate cortex triggered by dilemma judgments. Our results thus speak in favour of an association between moral cognition and sensory-specific properties of disgust.

Antico L., Cataldo E., & Corradi-Dell'Acqua C. (2019) Does my pain affect your disgust? Cross-modal influence of first-hand aversive experiences in the appraisal of others' facial expressions. European Journal of Pain

Antico L., Guyon A., Mohamed Z.K. & Corradi-Dell'Acqua C. (2018) Beyond Unpleasantness. Social exclusion affects the experience of pain, but not of equally-unpleasant disgust. Cognition, 181, 1-11.