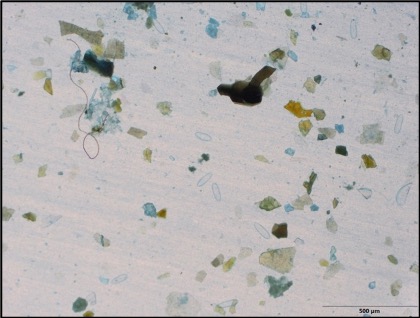 The contamination of aquatic environments by plastics and has been largely documented in the last years, especially in oceans, rivers, and lakes, but their occurrence in remote mountain lakes has been scarcely considered. This work aims to investigate the presence and abundance of microplastics and fibres in a remote, alpine, and uninhabited lake in Switzerland (Sassolo). In this study, the water column as well as the sediments were analysed. Detection of microplastics and fibres from very small sizes (125 μm) to larger sizes (5 mm) was first developed with an optical microscope. Then infrared spectroscopy was used to identify and characterize the chemical nature of the microplastics and fibres. On average, 2.6 microplastics and 4.4 fibres per litre were identified in the water column. Results obtained on the sediment samples also revealed significant and important fibre concentrations (514 fibres and 33 microplastics per kilogram). The most abundant types of microplastic identified in the samples were composed of polyethylene (PE) and polypropylene (PP). Microplastic and fibre sources were not determined but it is likely that the number of human activities in this area as well as aerial depositions are unfortunately contributing to contaminate this remote environment with microplastics and fibres.

Pictures of the GLACIALIS expedition