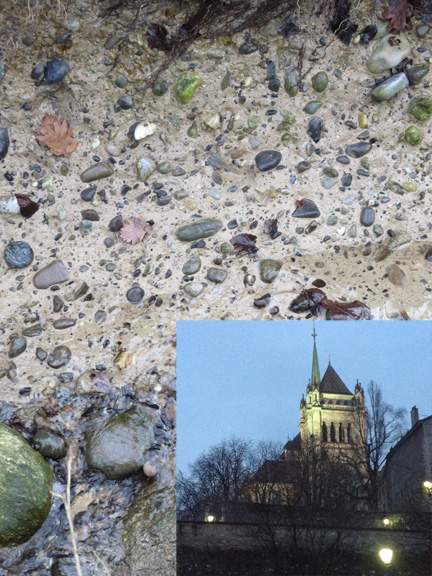 After the glacial retreat marking the end of the last Würm glaciation, humans settled down in the territories located north of the Alps during the late Paleolithic (Magdalenian culture), some 13’000 years ago. They chose areas with a favorable environment, particularly those crossed by wild animal herds which they hunted for food (reindeers, horses, etc.). Since early times, the Geneva Basin offered favorable conditions for human settlement, as well because of its topogaphy as its climate. In the Neolithic, the existence of the lake and its westernmost bay (the Bay of Geneva) provided favorable conditions for the settlement of the first farmers. Since the Gallic period, the Geneva hill provided a protected and strategic settling place, where the town of Geneva was founded and never stopped to grow until today.

But what are these natural elements from which the city originated, both in the strict and figurative terms, and what has been the human impact on the natural site since its first occupation? This guide tries to answer these questions as well as others associating the natural site, the town and Geneva surroundings. In order to do that, it presents a short introduction about the natural site, its geology and ancient history. The reader is then invited to visit different places within and near the city, and to familiarize himself more thoroughly with the history of the city site and the Canton of Geneva.

In order to better inform interested readers, this guide also refers to complementary documents and additional bibliography about several topics.