A turning point for climate communication

Our climate has never been more under the spotlight, and so are organisations dealing with climate change. Brigitte Perrin, Head of Communication for the World Meteorological Organization (WMO), tells us how education, communication, and action are all interconnected.

Your name may ring a bell to some readers of NewSpecial as an interviewer for the magazine. You’re the one on the grill today, in your capacity as Head of Strategic Communications for WMO. How does that feel?

I was educated as a journalist and political scientist. Born to two journalist parents, I started working in the media very early in life. Later, I was a TV journalist for several years, and met and interviewed influential people, politicians, and artists. I was always trying to focus on what makes a person unique. In my experience, when people accept to reveal their personality and talk about their life, they always bring something truly unique to the world. One of these interviews was turned into a book, with the former Director General of the International Committee of the Red Cross (ICRC).

After that, I was the New York correspondent for UN Special in the 2010s before crossing the line between journalism and communication. I crossed it for good –and for the greater good.

WMO, like the United Nations (UN), is a fantastic organisation and I am happy and honoured to contribute to making it better known. The transition to digital and agile communication is still in progress at the UN, sometimes at a slower pace than in society. In other respects, parts of the UN are ahead of their time, like the creation process of the Sustainable Development Goals (SDGs), which involved global online consultations and brought together Major Groups and civil society in defining a development agenda. I feel a responsibility to make these Copernican revolutions better known to the general public.

Like most UN colleagues who worked on the SDGs, I became a big supporter early on. When I moved back to Geneva, the University of Geneva was starting to promote the SDGs in all schools and faculties, so joining the University was a natural move. And from an academic point of view, it also made sense: sustainable development is the archetype of interdisciplinarity. To achieve the SDGs by 2030, we need to educate not only students, but also the professionals who are in charge today, and empower them with the tools to make the world a better and more sustainable place to live.

At WMO, I work with top-notch scientists who are passionate about climate and feel the urge to communicate – because there is a true climate emergency. It is a real and daily challenge. In the coming years, WMO will be more and more under the spotlights: extreme weather events are already hitting, hard, every day, everywhere on Earth. Scientists are very well aware of what is happening, and they are building capacities on communication and education. Decision-makers often strive to make the right decisions, they are under tremendous pressure and constraints. Governments, big and small, may not have all the necessary means and skills to act. Our contribution is to empower them by putting science under the spotlight, on prime time on news channels around the world, so we have a basis of commonly accepted science to start building upon. There is huge potential to better promote trusted and verifiable science.

Before WMO, you led communications for the University of Geneva’s Centre for Continuing and Distance Education. How did working with academics and researchers frame your approach to communicating on sustainability?

Researchers and academics are trained early on to be specific and meticulous. Accuracy is their Holy Grail. In communications, you need to be sharp, timely, and to the point. Connecting these dots is not easy. Cutting-edge research on sustainability builds on interdisciplinarity, interactions, nexus approaches, social and economic impacts or benefits of political decisions, complicated feedback loops… nothing that will ever make headlines. If scientists want to be heard, they need to turn away from heavy reports and theses that even other specialists do not have the time to read. Hence the success of new, innovative academic challenges like “My thesis in 180 seconds”.

There is also an urgent need for more dialogue between universities, international organisations and the private sector. Still, it can happen only if everyone speaks a language that others understand.

In 2017, the University of Geneva had already supported a project in this regard, the first Geneva Trialogue conference, that we initiated with the Director of the Centre for Continuing and Distance Education, Sophie Huber. Without partnerships between all actors, the sustainable development goals will have no chance of succeeding. This applies precisely to climate adaptation and mitigation.

You have just come back from COP27 in Sharm El Sheikh. Give us your view on this COP.

From the media and the civil society’s point of view, COPs never live up to expectations. For me, any step towards collaboration, financing engagements, or incentives to move in the right direction to fight climate change, must be considered as a success.

As communicators, it is also our responsibility to build on this success and communicate consistently across UN agencies and partners on the actual impacts of these small steps (or absence thereof, if not sufficient).
COP27 closed with a break-through agreement to provide “loss and damage” funding for vulnerable countries hit hard by climate-related disasters. It also emphasised the need to strengthen systematic observations and to achieve universal coverage of early warning systems – two of the WMO’s top priorities. This is a very positive outcome for us.

Climate scepticism is on the rise despite the daily evidence of climate change, similarly to what we saw vis-à-vis expert consensus in relation to COVID-19. How can strategic communications take on the challenges of disinformation?

Misinformation has been set as a priority topic by Melissa Fleming, the UN Under-Secretary-General for Global Communication, and it is an issue we take very seriously. Misinformation undermines good governance and what brings us together as a species, because we need an agreement on the facts, as a solid base for mutual trust. I am taking part in the UN Climate misinformation task-force where we are discussing the role and responsibility of social media in disseminating misinformation. We just launched a campaign called Communicating on Climate Change to promote best practices in climate communication. Using authoritative scientific information, avoiding stereotypes, and linking climate communication to justice are some examples of best practices. The poor and marginalized are often hit the hardest by increasing climate hazards like floods, droughts, and storms.

The spread of lies about climate change undermines all other efforts. To survive, we must wrest control from those seeking to distract from and delay climate action and renew our trust in the scientific community. Working hand-in-hand with the academic community, researchers and experts, and promoting continuing education and trusted communication are crucial to face the current crisis. What we need are strong public authorities, a vibrant civil society, solid research, decisive move in the industry and finance sectors, and lively dialogue leading to solutions. 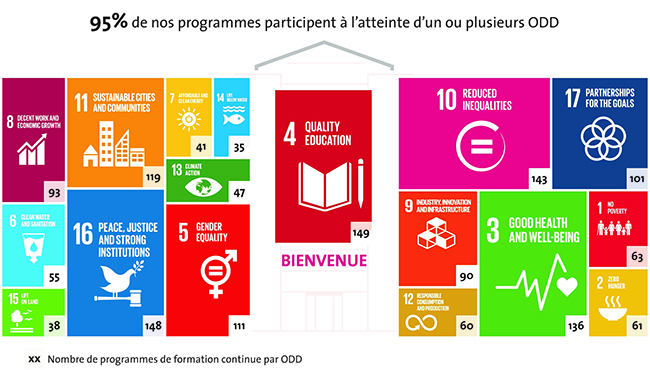