The Oxford Handbook of Sociolinguistics 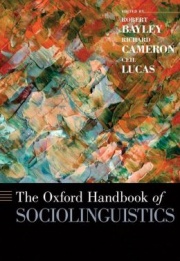 From its beginnings in the 1960s, sociolinguistics developed several different subfields with distinct methods and interests: the variationist tradition established by Labov, the anthropological tradition of Hymes, interactional sociolinguistics as developed by Gumperz, and the sociology of language represented by the work of Fishman. All of these areas have seen a great deal of growth in recent decades, and recent studies have led to a more broadly inclusive view of sociolinguistics. Hence there is a need for a handbook that will survey the main areas of the field, point out the lacunae in our existing knowledge base, and provide directions for future research.

Presents the major theoretical approaches, in particular bilingual and multilingual contexts, and both spoken and signed languages

Offers not only an up-to-date guide to the diverse areas of the study of language in society, but also numerous indications as to where the field is headed

ROBERT BAYLEY is Professor of Linguistics at the University of California, Davis. He has conducted research on variation in English, Spanish, Chinese, ASL, and Italian Sign Language as well as studies of language socialization in U.S. Latino communities. His publications include Language as Cultural Practice (with Sandra R. Schecter, 2002), and Sociolinguistic Variation: Theories, Methods, and Applications (with Ceil Lucas, 2007).

RICHARD CAMERON is Associate Professor of Linguistics in the Department of Hispanic and Italian Studies and the Department of Linguistics at the University of Illinois at Chicago. He has published on Puerto Rican Spanish, Chicago English, age, gender, medical discourse, and sociolinguistic theory. A recently edited book is Spanish in Context (with Kim Potowski, 2007).

CEIL LUCAS is Professor of Linguistics at Gallaudet University in Washington, DC. Her recent publications include Language and the Law in Deaf Communities (2003), The Linguistics of American Sign Language, 5th ed. (with Clayton Valli et al., 2011), and The Hidden Treasure of Black ASL: Its History and Structure (with Carolyn McCaskill, Robert Bayley, and Joseph Hill, 2011).