Documenting Nepali voices on the Chinese investments in Nepal

Krittika Uniyal, a doctoral student at the Environmental Governance and Territorial Development pole (GEDT) travelled to Nepal to carry out her empirical research work, and below she shares her experience from the field. 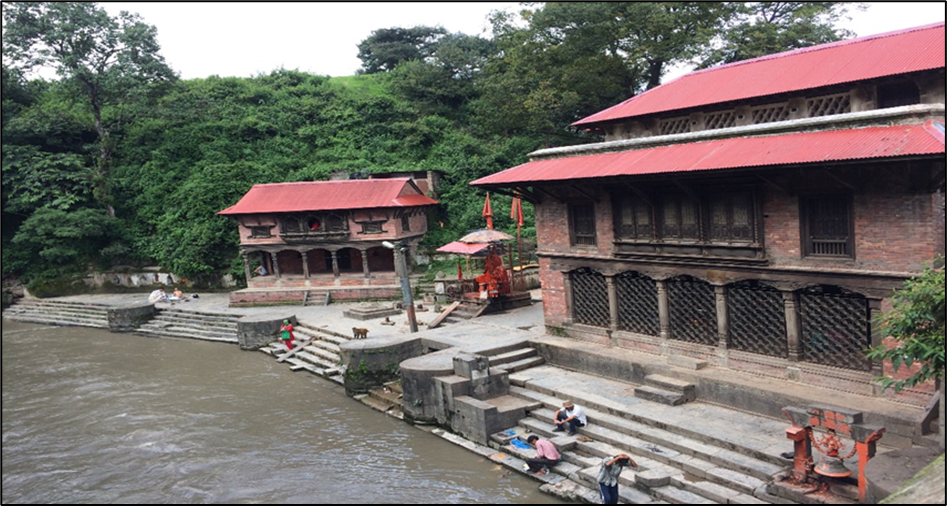 China's membership in international institutions and organizations increased dramatically in the post-Maoist period. At present China is more integrated into, and more cooperative within global, political, and economic systems than ever before, and it is perceived to change the geopolitical map of the world in the coming decades. In this context, the vastly publicized initiative in China's current foreign policy, the Belt and Road Initiative (BRI), is acknowledged to be one of the most ambitious geopolitical initiatives in human history. This initiative across the world is raising important scholarly questions concerning China’s relationship with its neighbours, China’s role in the international system, and the very understanding of the nature and evolution of the international system and international cooperation. In contributing answers to these concerns, the empirical objective of my research is to bring meaning to the discourses of actors involved in shaping China Nepal relations in general and the BRI in Nepal in particular, as an illustration of many other countries that are in the BRI’s orbit. While the theoretical objective is to critique the Western scholarship in the discipline of international relations and suggest that culture and value systems play an essential part in determining the behaviour of a nation-state in the international arena and relying only on the Western international relations studies can limit interpretations and offer a partial view.

As a part of this research, in January 2020, I did a two weeklong feasibility study funded by GEDT to establish contacts in Nepal. At that time, I met and interviewed my key informants for the research at Tribhuvan University, Research Centre for Nepal, and Asian Studies, and Nepal Institute for International Cooperation and Engagement. Here I met some of the preliminary contacts that I would reactivate and use in snowballing during my successive field visits to Nepal. These meetings turned out to be essential in acquiring an overall vision of the socio-political and economic issues underlying the question of recent Chinese developments in Nepal and in evaluating the viability of conducting fieldwork in the northern border regions of Nepal. It also helped me in refining my theoretical concepts, research questions, and developing my research methodology. During this time, I also arranged to receive an office station at the International Center for Integrated Mountain Development for the duration of my successive fieldwork in Nepal. 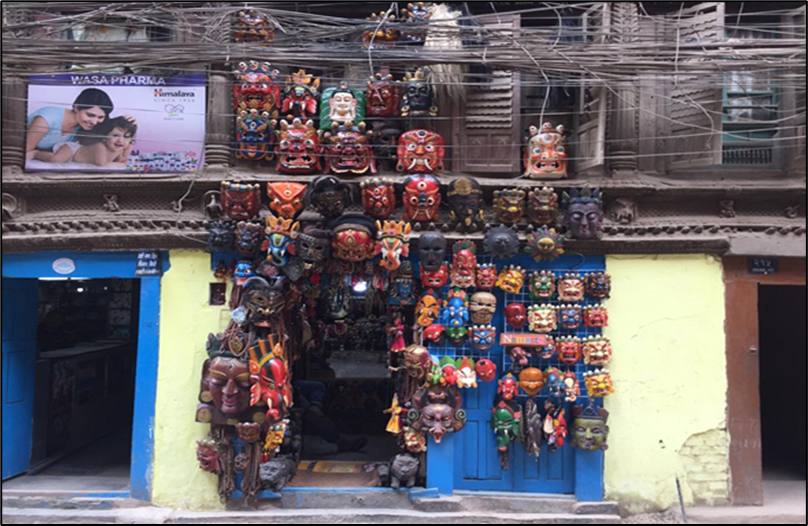 Image 2: Atraditional mask shop near Thamel, Kathmandu. These masks represent a blend of Hindu and Buddhist gods and goddesses signifying a blend of both religions.

I had to consider many factors while planning my second and detailed field visit to Nepal. The climatic conditions in the Himalayan foothills aren’t the most favourable during winters (November to February) as many border routes and crossings are closed due to snowfall, and during the monsoon (mid-June to September) there is an increased risk of flash floods and landslides. October and November are the major festive months with most government holidays, along with which the COVID-19 pandemic had led to unusual circumstances and more challenging situations. On March 9, 2021, the WHO Country Office for Nepal released a situation update highlighting the lowest COVID-19 positive cases in Nepal, 98.6% of cases have recovered and while only 0.32% (895) of cases were active. Based on these factors, the information gathered during the previous feasibility visit, and the suggestions and recommendations of key informants and colleagues working in the region, I identified the timeline from mid-March to July 2021 for conduction my fieldwork in Nepal.

After completing the mandatory quarantine requirement for foreigners, I began my second and detailed fieldwork on April 1. This fieldwork was co-funded by GEDT and the William Rappard Fund. I began by establishing a base in Kathmandu and reconnecting with key informants and other previously established contacts. My research employs a method of semi-structured interview encompassing informal conversational interview, general interview guide approach, and standardized open-ended interview to discuss multi-level Nepali audiences in understanding the discourses arising from the analysis of Nepali newspapers and the audiences’ understanding of increasing Chinese influence and the BRI in Nepal. I took the case study of certain BRI projects in the Rasuwa and Sindhupalchokdistricts of Nepal, this was to explore the practices of the BRI and how the Nepali and Chinese authorities are involved in the implementation of the BRI projects and adding to the geopolitical discourses arising from Nepal.

I began this fieldwork by organising a series of meeting with key informants and making logistical arrangements to visit other regions of Nepal, where Chinese funded projects were on the way. The informants at Tribhuvan University connected me with fellow researchers working on a similar topic, and I was suggested to first finish my visit to the border regions preferably by May before the onset of the monsoon. Although, the Nepal border crossing with China was closed since the start of the pandemic it was still possible to visit the Nepalese side of the border and conduct interviews. While the other interviews and collection of archival material were spread across the entire duration of my field visit.

Since the libraries in Nepal had finally reopened after months of lockdown, I began the collection of my archival data first at Tribhuvan University Central Library. The Chief librarian and staff allowed me easy access and were very cooperative. The data collected through the Nepalese media texts provided a context for the study of both, Nepali discourses of China’s development, and Nepal’s imaginations of China and the BRI. For this, I focused on the news reports and articles published around the specific timeline post-2008, the year Nepal became a federal democratic republic. The collected data will assist in testifying the existence of certain political discourse regarding BRI in general, and in specific to the case of BRI in Nepal. 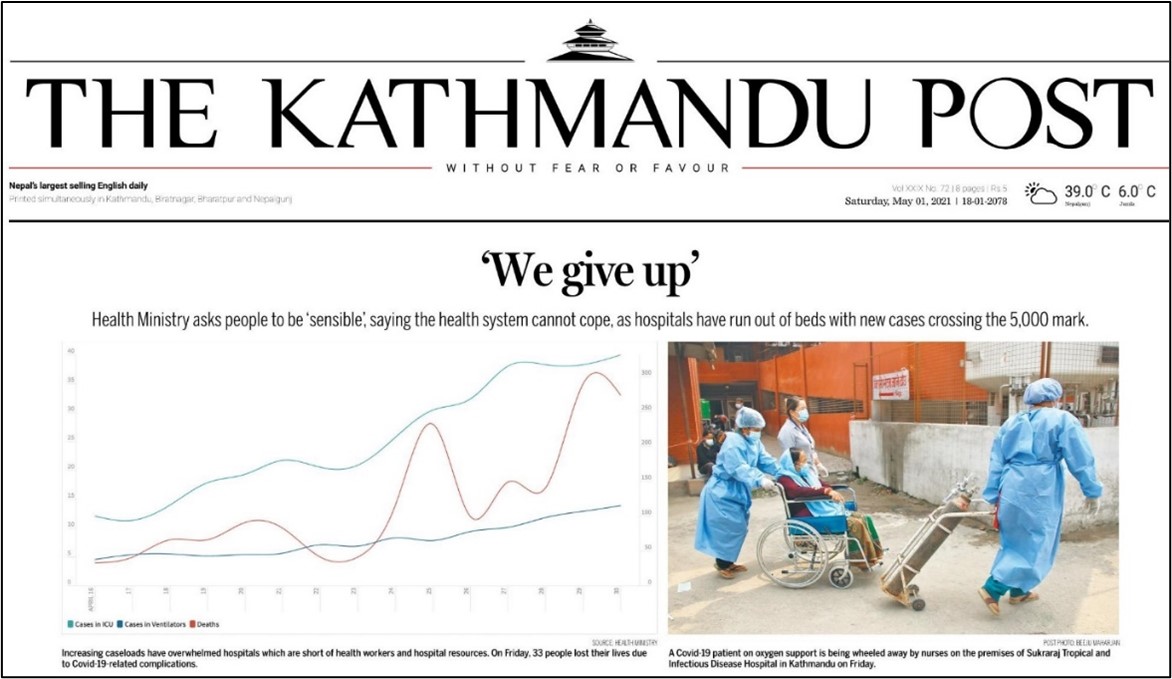 By the end of April, the second wave of COVID-19 pandemic had hit South Asia, and within two weeks Nepal experienced an exponential rise in the number of infected cases. On April 1, the total countrywide cases were 152 that had jumped up to 4,897 by April 28 (Nepal Economic Forum). Owing to the sudden rise in the cases, on April 26, the Chief District Officer of Kathmandu issued prohibitory orders, and the operation of public and private vehicles was stopped in Kathmandu district and borders with China and India were sealed. All regular businesses, industries, and educational institutions in urban areas were shut, and transportation services across the country were restricted. In the coming weeks, the situation in Nepal got worse with the pandemic impacting almost every sector of Nepal’s economy and society. The remainder of the fieldwork was put on hold, and much of the interviews were carried online.

Overall, both these field visits assisted in shaping the course of my research, and I am thankful for receiving the financial support from GEDT and the William Rappard Fund for them.