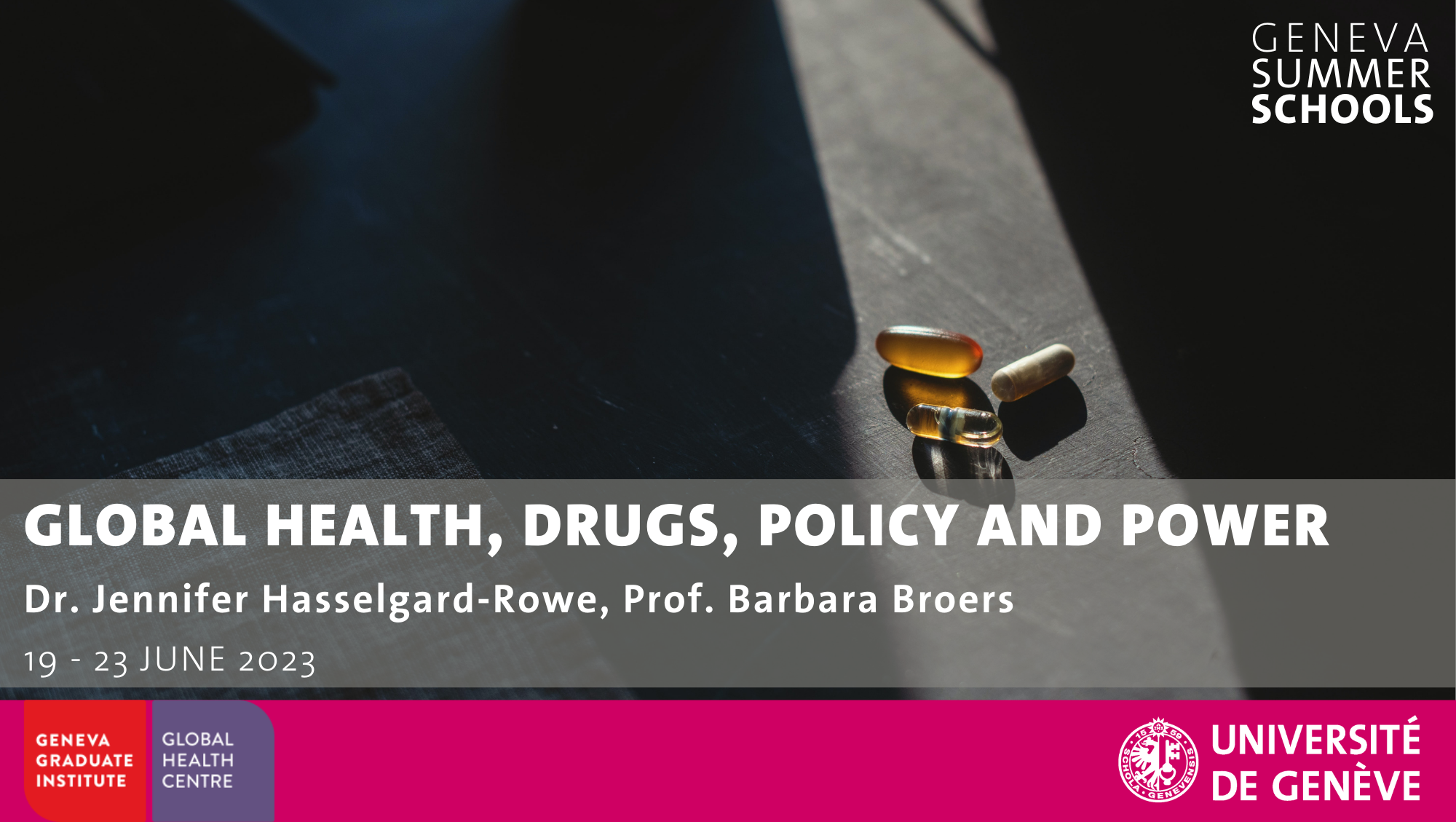 WHO IS THE COURSE FOR?

Bachelor and Masters students, as well as junior professionals from all walks of life who are interested in global health, drugs, governance and human rights.

The summer school will address a number of important questions at the heart of international drug policy discussions today. The course will include lectures, case studies, mock debates, group work and more.

Human rights, governance and health will constitute cross-cutting themes, that will be addressed as and where relevant to each of the sessions of the week.

The suggested structure is as follows:

Day 1: Global health, global health and the international drug control system (with a particular focus on scheduling of illicit substances and the consequences of prohibition; as well as an overview of the epidemiology of drug use around the world)

Day 2: Challenges of access to essential medicines (including pain control); and the opiates overdose epidemic in the US and Canada

OBJECTIVES of the COURSE

The main objectives of the Summer School are for students to:

The multidisciplinary Summer School will be taught in English by a variety of academic experts in their respective fields.

The classes will take place at the CMU (Rue Michel-Servet 1, 1206 Genève)

Students will be required to give a 15 minutes group presentation on the last day of the course, on a topic that will be decided upon on the first day of the course; and which will no doubt focus on looking into what requirements and conditions may be required for a specific drug policy to be put in place; not just what would be the components of such a policy, but what steps would be needed to get there; and what role each of the relevant stakeholders could play, both at the national/community and international levels.

By taking this summer school course, may earn you the equivalent of 3 ECTS credit points. Evaluation will be based on attendance, class participation and a presentation on the last day of the course.

Participants choosing the package, can register through us for housing at the Cité universitaire de Genève. Please thorougly read our instructions before filling in the application form.

Please note that only a limited number of rooms are available for that course. All applications are handled on a first come first served basis and assignments will be subject to availability. 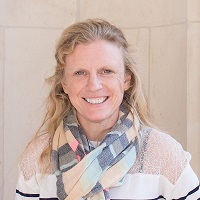 Researcher and lecturer with an academic background in law and public health who has worked on human rights and health issues in detention for several years, including for her PhD thesis: “Ending detention of drug users in Cambodia: international and domestic factors influencing the country’s substance use policies and practices”. Her principal fields of expertise include: human rights law, international humanitarian law and substance use issues (specifically harm reduction and other evidence-based public health policies and practices).

From June 2017 to December 2019, she was the Executive Coordinator of the Geneva Platform on Human Rights, Health and Psychoactive Substances, bringing together civil society and international organisations working in the field of health, human rights and drug policy to better share information and promote health and human rights in all drug-related questions addressed in Geneva.

Jennifer has worked for the International Federation of Red Cross and Red Crescent for several years, has experience working in multi-cultural environments and speaks six languages. She is a graduate of the University of Melbourne (PhD) and the Australian National University (BA/LLB); has been a Visiting Fellow with the Global Health Centre, at the Graduate Institute of International and Development Studies in Geneva; and is currently  also Projet Director with the International Centre on Human Rights and Drug Policy, University of Essex.

Faculty of Medicine
University of Geneva

Graduate from the Medical Faculty, University of Amsterdam, Barbara Broers has over 30 years of experience in addiction medicine, HIV/AIDS/hepatitis and harm reduction projects; mostly in Switzerland, as a physician, public health specialist and advocate.

She is responsible for an outpatient consultation for people with substance use disorders at the Geneva University Hospitals, and training medical students and family doctors in this field. 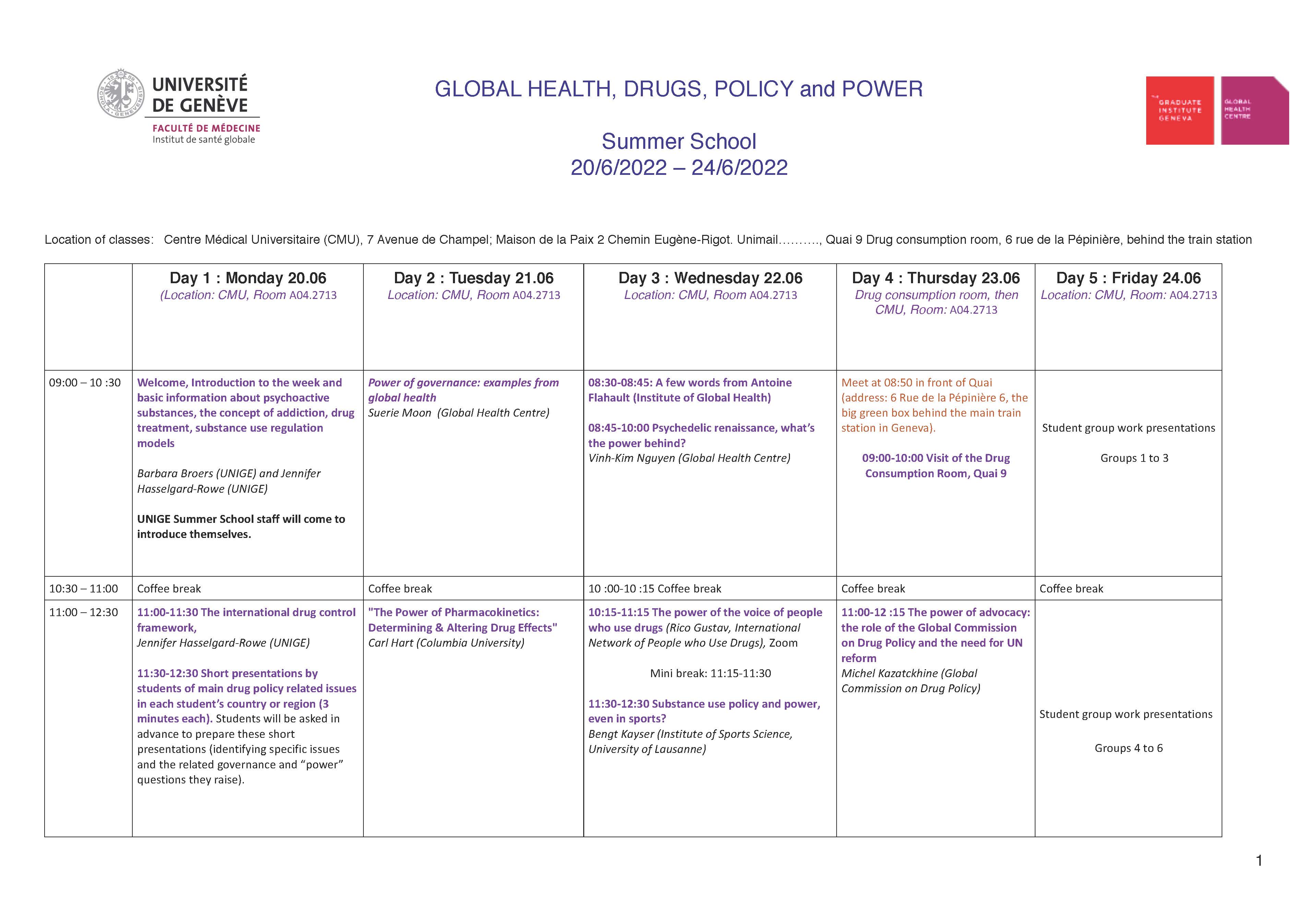 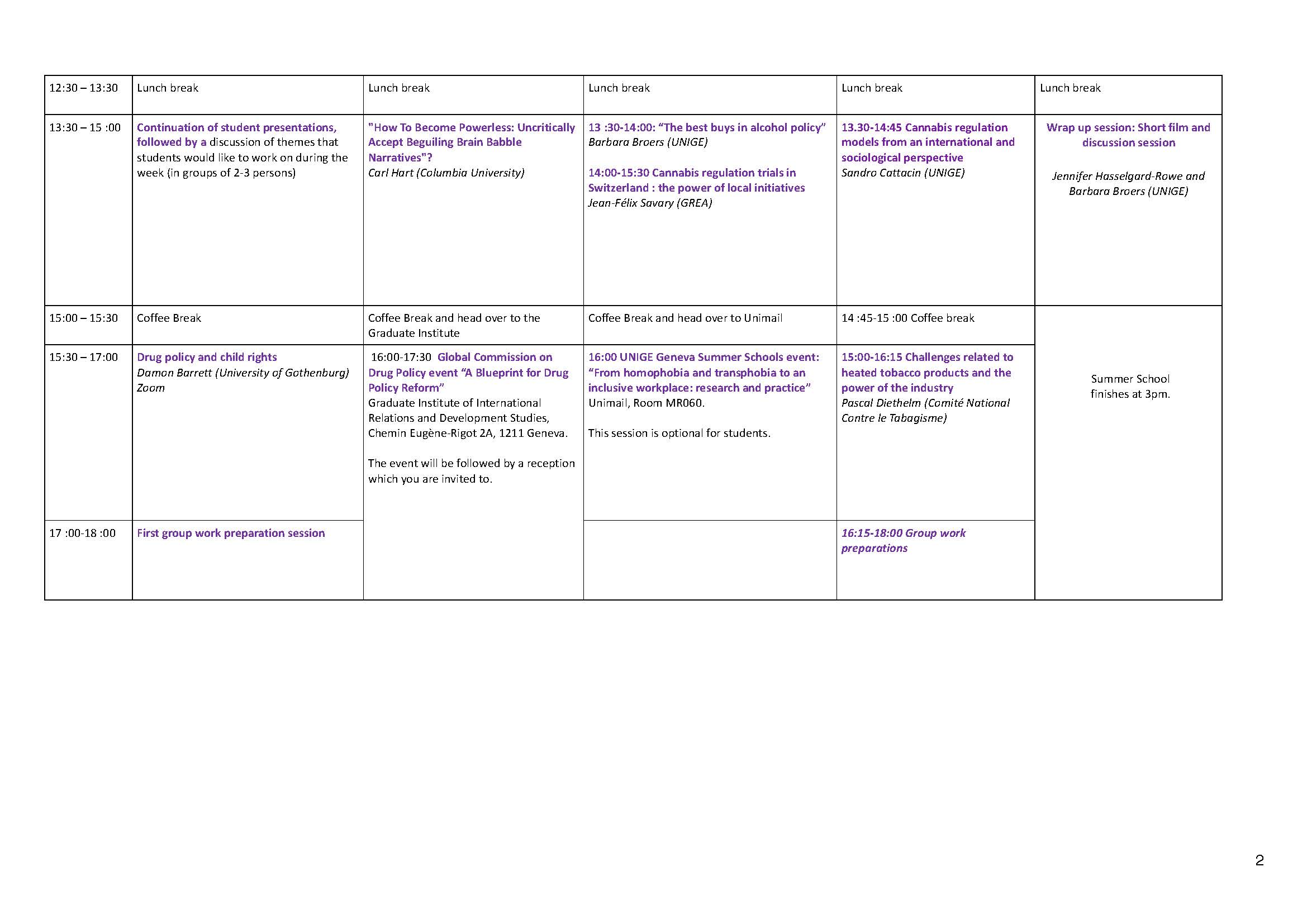 I have anxiously waited to attend this course which was postponed because of COVID19 and it was worth the wait. The course content was rich and offers a different perspective on drugs (which includes the most common and also the most harmful drug in society today - alcohol) offering a harm reduction approach to drugs. It was a complete contrast to the war on drugs that have ravaged several countries in Asia, including extrajudicial killings that have affected thousands in the Philippines, and have enabled the weaponization of death penalty for drug offenses in Singapore. While I remain cautiously optimistic about the prospects of harm reduction approaches in more countries in Asia beyond Thailand, I am encouraged by the progress made in other countries in other regions.

I would recommend that this course be offered as an executive education course to policymakers and law enforcement officials too so that they can have an alternative point of view about drug issues in our societies. I sincerely enjoyed and learned a lot - not just from all the lectures, from the various speakers both in-person and those who joined online, but also from my classmates who passionately shared experiences from their countries and their own work. I am deeply indebted and appreciative to our course coordinators - Dr Jennifer Hasselgard-Rowe and Dr Barbara Broers - for organizing a wonderfully enlightening week on global health, drugs, policy, and power.

While there is room for more issues to be covered from different regions like Asia, Latin America and Africa, there was considerably appropriate coverage of the core issues to problematize drugs, policy, and power.

"Drugs, Health and Human Rights at the Geneva University is one of a few pivotal starting points in a new paradigm for the global fight against disease, harms and societal consequences from substance use in dangerous ways or dangerous amounts. As a global advocate and consumer expert in nicotine, it was an honor and a privilege to attend the summer school class in June 2019. I came away with a much better understanding of the wider landscape with stakeholders everywhere. I also came away with huge amounts of useful, crucial and valuable connecting lines between the dots that rule global substance policy and national legislative strategies, like mass incarceration in the USA for example. Interestingly for me, zero of the lines we used at UNIGE to connect the dots looked anything even remotely similar to the lines that many politicians and law enforcement agencies argue is the right way to look at the problem. In our class we had extremely well positioned policy advisors from African countries. Some of these brilliant and empathic people had church teachings very very deep and initially baulked at the notion of seeing addicts as normal people with a condition or to argue for nations to start turning down the heat on the unwinnable war against drugs. I have the deepest respect for the strength in faith that people like that have, and even they connected dots in a vastly more humane way that law enforcement generally does.

The absolute majority of all substance use globally is non-problematic. A small percentage predisposed or in a life-situation conducive to escapism however do get serious problems, similarly to with alcohol. Smoking however is somewhat different as it has a strong deleterious health effect on 99% of the users rather than the 5%-10% seen in other forms of drug use. Global Health, Public Health, National Health, and the resources spent to ensure and restore best attainable individual health are all numbers games – making the money stretch as far as possible. Prevention is rightly cited as one of the most important global actions that needs to be pursued to conserve scarce resources for other ailments than NCD’s – For drugs this can equally well mean use drugs safely as do not use drugs at all ever. In my subfield nicotine, the consumers and the scientists who we work with look at the harms and risks rather than the use itself. The WHO and many nations have taken the opposite views on nicotine, but interesting and very much conflicting is that drugs is increasingly seen as mainstream to have a prevention - harm reduction approach on, That is however only part of the story and it is very difficult to prove that resources spent on prevention (no use at all) have material benefits in lower costs. Harm reduction however, the flip side of prevention has a long track record of massively successful impacts on health. Harm reduction is seen in so very many walks of life that we don’t even think about it. Food standards, seat belts and helmets, rubber concrete in kids’ playgrounds – the list is endless. Harm reduction is a vital component of any ethical and defensible strategy on substance use – and the framework on how Harm Reduction works and should/could be implemented is applicable to any form of behaviour that carries risk.

I hope you will take this course and come away understanding that when industry can assume almost all the costs for lowering risks massively in entire populations – then it is unconscionable for any actors in Public Health to not embrace and utilise this to the fullest extent possible. In Africa, in Latin America, in Central Asia and in South eastern Asia and the pacific too. Regulated industry is fantastic, but it is industry all the same which means it is a machine built for making profit, not for the common good. As long as the regulator is aware of the different motivations and reasonably cushioned against corruption, industry is the best option for harm reduction, at least in nicotine/tobacco.

I recommend this course for the excellent faculty, guest lecturers, and genuine importance of the subject matter. Walking the walk is every bit as important as talking the talk, that much was obvious, so don’t expect to go home and still see the unfortunates in your society with the same eyes again, ever."