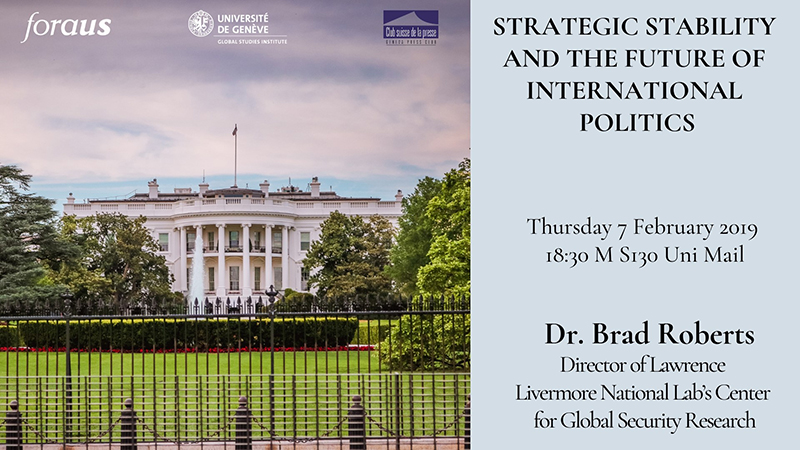 The conference will be in English.

The concept of strategic stability has emerged in recent years as a useful framework for understanding how the relationship between various challenges—such as nuclear proliferation and terrorism, cyber security, and great power relations—affect the prospects for international peace and stability. Dr. Brad Roberts will take stock of the current strategic context and assess the prospects for enhancing stability in the coming years.

Brad Roberts is director of the Center for Global Security Research at Lawrence Livermore National Laboratory in California. From April 2009 to March 2013 he served as Deputy Assistant Secretary of Defense for Nuclear and Missile Defense Policy. In this role, he served as policy director of the Obama administration’s Nuclear Posture Review and Ballistic Missile Defense Review. From September 2013 through December 2014, Dr. Roberts was a consulting professor and William Perry Fellow at the Center for International Security and Cooperation at Stanford University. Prior to joining the Obama administration, Dr. Roberts was a member of the research staff at the Institute for Defense Analyses and an adjunct professor at George Washington University. A member of the Council on Foreign Relations, Roberts has a bachelor’s degree in international relations from Stanford University, a MA. from the London School of Economics and Political Science, and a PhD in international relations from Erasmus University.