Contacts with UNHCR Nairobi were established in 2009 and this new collaboration led to further courses being offered there from 2010 onwards; these also followed the blended model. Originally, the beneficiaries were interpreters already working for refugees arriving in Nairobi. However, UNHCR was quick to invite InZone to deploy training in the Kakuma refugee camp in north-western Kenya. 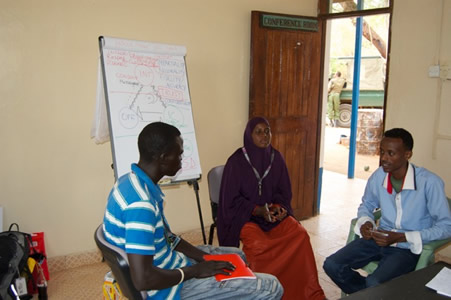 This was a new departure for InZone: training refugees in the field to become interpreters.

Contacts followed with Medecins sans Frontieres (MSF Switzerland operating in Somalia), which involved a new sustainability dimension: the exercises conducted by one generation of students would be reproduced and used as training material by subsequent generations. The experience of this course development was significant: hitherto, InZone had been collaborating with partners within a clearly defined context set by International Humanitarian Law (IHL). The MSF cooperation took InZone beyond that enclosure into the realm of education in settings with a pressing humanitarian dimension, but in which there was no legal base for the provision of interpretation.

InZone attracted attention from the United Nations Assistance Mission in Afghanistan (UNAMA). This body sought the training of interpreters already operating in various locations in that country, again outside the IHL framework.

InZone’s internal skill resources were now being pushed to the extreme in yet another fragile context.

Furthermore, the heterogeneous conditions in which InZone was now working (urban environments, refugee camps), and differing levels of education of the student audiences for which it was catering, constituted a major challenge. Faced with the objective of professionalizing humanitarian communication, InZone realized that the broader dimension of higher education as a whole was central to the endeavour.