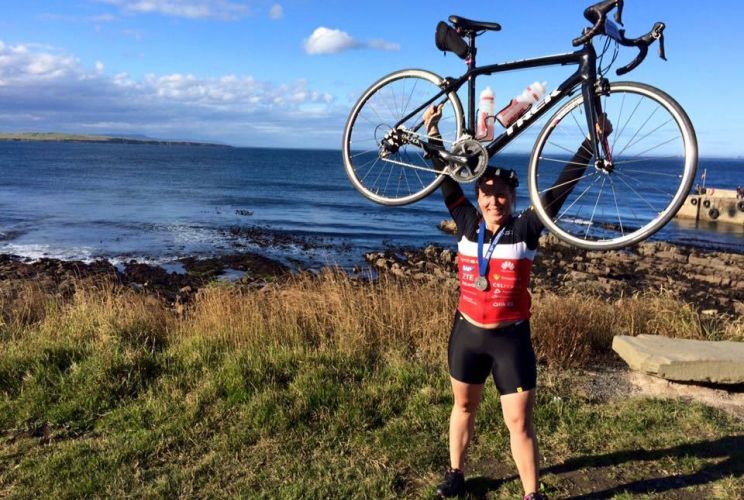 Tell me about the Deloitte Ride Across Britain.

We biked nearly 1000 miles across the United Kingdom. We started in Lands End in the southwest of England and finished in John O'Groats in the northeast of Scotland. It took 9 days, biking more than 100 miles each day. This was the 9th annual ride organized to fundraise for a variety of causes. You can find more information about the ride athttp://www.rideacrossbritain.com/

Wow, that’s a long way! How did you get involved in this bike ride? Were you a cyclist before this ride? How did you train?

My friend and colleague at UNHCR, Jackie Strecker, told me about the ride.  We had already worked together on many innovative refugee education programs. In this case, Vodafone was collaborating with UNHCR and fundraising for education programs in refugee camps in East Africa. Since I know what a difference these kinds of programs make on the ground, I was honored to cycle for such a cause.

I had never done much cycling beyond biking to work or the occasional workout to complement other training.  With a ride like this, I knew I would need to train very hard and learn how to cycle on a proper road bike. I ended up having to get a new bike and joined a local Geneva cycling group.  Everyone I met in the group was very encouraging and helped teach me different techniques from group riding to climbing hills...and I really fell in love with the sport!

How many people participated in the ride? Where are they from? What causes did they support?

There were nearly 800 cyclists from all around the world. Many rode with large companies like Deloitte, DHL and Vodafone. However, there were lots of smaller teams and individuals riding for a variety of great causes such as the British Paralympic Association.

You rode for the Vodafone Team. Can you tell me more about the cause they are supporting and the team itself?

There were 125 people on the Vodafone Team. We were fundraising for the Instant Network School program that Vodafone had developed, which has already been deployed in 18 refugee schools. The goal was to install the instant network in more refugee schools and specifically support refugee education programs in the Democratic Republic of Congo. You can learn more about the instant network school program, which uses tablets loaded with educational software, in this short video.

What was the experience like? Any particular highlights from the trip or some tough patches?

This was one of the most amazing things I have ever done.  Physically it was very tough to ride: 100 plus miles every day, sleep in a tent for 9 days, get up the next morning when it was dark and do it all over again.  Thankfully we had beautiful weather and it only rained one day, but the mornings and evenings could get quite chilly, especially in the Highlands of Scotland.  The scenery was absolutely spectacular, and this was the first time I had visited so many places in the UK.  Each day we would make new friends and bike with different people, hearing their stories and motivation. We encouraged and supported each other up the steep hills and helped others repair flat tires.

The organizing company, Threshold Sports, did an incredible job of arranging all the pit stops, medical support, and base camps.  Each evening as we came into camp we were assigned a tent and allowed a 3 minute hot shower.  Then we headed into the main tent where a large meal awaited us. Over steaming plates and cold beers we would share our stories about the day's ride. Each evening there was a briefing, often with an inspirational speaker and then the route for the next day was described.  By 9 pm, most of us went to our tents totally exhausted and ready to climb into our sleeping bags!

The toughest part for me was getting up each day. It was often cold and damp out and my muscles were sore.  But once I was up and dressed and had a hot breakfast, I was ready to get on the road. Tackling the long rides and tough hills was an exercise in mental toughness and I coached myself through it..."push down on the pedal, stay on your bike, you got this, keep going, there will be a nice downhill after this uphill!"

Crossing the finish line was an incredible, indescribable feeling of accomplishment, not just for me but for everyone I had met along the ride.  People are capable of amazing things and I was humbled to be a part of this journey!

How much was fundraised as a result of this event? Can people continue to get involved?

Team Vodafone raised more than $1,000,000! We are still raising money and if you would like to donate, you can here.

For any questions, or to learn about other great refugee education programs that you can support, please feel free to contact Erin at Erin.Hayba(at)unige.ch