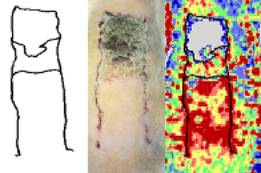 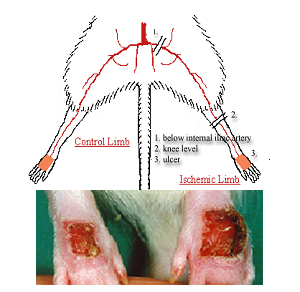 Experimental study on physiology, histology of tissue ischemia and the onset of irreversible necrosis on an ischemic skin flap model in rats. Expression of endogenous VEGF and its tyrosine kinase receptors has been measured in the flap by immunohistochemistry to demonstrate the presence of angiogenesis. VEGF and bFGF were applied under the flap to stimulate in situ angiogenesis using an ex vivo gene therapy approach with transfected cells placed under the flap in semi-permeable capsules to increase flap survival (Prof Pepper, Prof Aebischer).

Dynamic study of cutaneous blood flow under ischemic condition has been carried out using laser-doppler analysis and microangiography. Inhibition of microvascular thrombosis by parenteral administration of various coagulation inhibitors (inactivated factor VII, rNAPc2) to decrease tissue necrosis under ischemic condition has been successfully tested (Prof Pepper). The efficacy of intermittent hypoxia training (IHT) as a hypoxic preconditioning procedure has been tested. IHT consisted of 20 daily sessions of alternative exposure of hypoxic gas mixture and ambient air. A significant decrease of PO2 during IHT sessions, with a tendency to disappear after 4 weeks of IHT, has been demonstrated. Preconditioning with IHT led to a significant increase of overall flap survival. Analysis of mRNA-expression of vascular endothelial growth factor (VEGF) and its receptors in skin, as well as in the flap, after a 4 week course of IHT to compare rats preconditioned with IHT versus a control group, did not reveal a significant difference.

Development of an animal model of burn lesion in rats. Analysis of the microcirculation around the lesion by laser-doppler and microangiography to demonstrate the secondary aggravation of the burn lesion. Administration of coagulation inhibitor (rNAPc2) to stop the mechanism of secondary burn extension(Prof Pepper)

Experimental research on new types of flaps: the arterialized-venous flap. Development of the animal model (rabbit ear), study of the mechanism of survival and the role of neovascularization in this survival. Anatomical classification of the various types of arterialized-venous flap; study of the maximal surface of flap survival based on the anatomy of the vascular venous tree within the flap.

Description of a new flap ; the serratus anterior musculo-cutaneous . Based on anatomical dissection, description of the cutaneous perforator vessels reaching the skin paddle (Prof Fasel ).