The extracellular matrix (ECM) is continuously renewed and degraded according to a finely tuned process. Fibroblasts are the cells mainly involved in this process. Fibrosis results form dysregulated synthesis and degradation of ECM. The mechanisms leading to fibrosis are only incompletely understood. An inflammatory infiltrate, mainly composed by mononuclear cells, precedes virtually al process resulting in fibrosis. Furthermore, fibroblasts seating near to inflammatory cells tend to have higher ECM synthetic rate. The hypothesis can be raised that inflammatory cells and in particular T cells and their products may participate in initiating, amplifying or maybe also inhibiting fibrotic processes by influencing the fibroblast synthetic rate. To tackle this hypothesis we have taken systemic sclerosis (SSc) as a disease model, characterized by fibrosis of the skin and internal organs, vasculopathy and auto-immunity. We have developed an in vitro model that allow us to study the dynamic relationship between fibrobalsts and autologous T cells generated form skin biopsies obtained form SSc and healthy individuals. The results show that T cells have the capacity by cell-to-cell contact and by releasing soluble mediators, to modify the synthetic rate of fibroblasts thus indirectly modifying the ECM composition and the enzymes involved in its degradation. The quality and intensity of fibroblasts responses are greatly influenced by the functional phenotype of T lymphocytes (Th1, Th2, Th17, Th22). Of interest, fibroblasts from SSc behave differently when compared to fibroblasts generated from healthy individuals, insomuch they are resistant to contact-dependent inhibition. We are currently investigating the mechanisms underlying such phenomenon. We have devoted great interest to chemokine production for their capacity to recruit inflammatory cells, to modify the adaptive immune response, and participate to ECM regulation. Finally, in collaboration with others, we have identified agonistic auto-antibodies able to activate pro-inflammatory fonctions in fibroblasts.

In addition, our laboratory is member of the PECISESADS consortium, which aims at reclassify on the basis of genomic, transcritpomic,  proteomic and phenotypic data the systemic autoimmune diseases including systemic lupus erythematosus (SLE), SSc and others. Finally, we are members of the Swiss SLE Cohort Study (SSCS).

The ultimate aim of our studies is to identify molecular targets amenable to therapeutic intervention to halt or to reverse fibrosis within the context of systemic autoimmune disorders.

Our laboratory is located in room E06.2755.A at the University Medical Center. 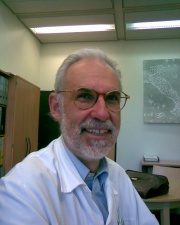