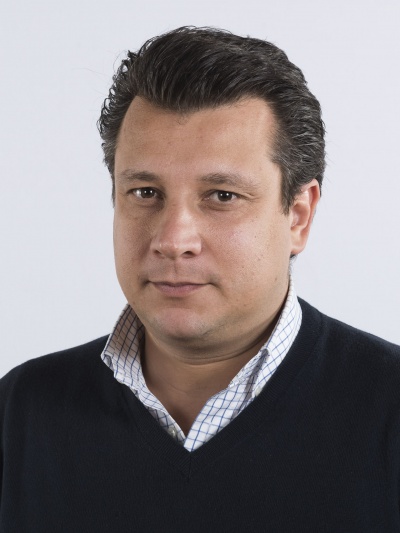 Emmanouil (Manolis) Dermitzakis is currently a Professor of Genetics in the Department of Genetic Medicine and Development of the University of Geneva Medical School. He is a member of the executive board of the Institute of Genetics and Genomics in Geneva (iGE3) and a member of the Swiss Institute of Bioinformatics. He obtained his B.Sc. in 1995 and M.Sc. in 1997 in Biology from the University of Crete (Greece) and his PhD in 2001 from the Pennsylvania State University in the USA, studying the evolutionary biology and population genetics of regulatory DNA in mammals and Drosophila. His post-doctoral work was at the University of Geneva Medical School, focusing on comparative genome analysis and the functional characterization of conserved non-genic elements. He was an Investigator and Senior Investigator at the Wellcome Trust Sanger Institute from 2004 to 2009. He was elected an EMBO member in 2014 and was also named Highly Cited Researcher. His current research focuses on the genetic basis of cellular phenotypes and complex traits. He has authored and co-authored more than 120 papers in peer-reviewed journals and many of them in journals such as Nature, Science and Nature Genetics, his papers have been cited more than 30,000 times and his H-index is 64. His research is supported by the Louis-Jeantet Foundation, the Wellcome Trust, the Swiss National Science Foundation, the European Commission, the Juvenile Diabetes Foundation and the US National Institutes of Health (NIH). He is also the recipient of a European Research Council (ERC) grant. He has been invited to give talks and keynote lectures in most of the prestigious genetics meetings and is the organizer of multiple training courses including the Wellcome Trust HapMap course and co-founder and co-organizer of the Leena Peltonen School of Human Genomics. He has served as an analysis co-chair in the pilot phase of the ENCODE (ENCyclopedia Of Dna Elements) consortium and member of the analysis group of the Mouse Genome Sequencing Consortium and the International HapMap project. He had a leading analysis role in the extension of the HapMap (aka HapMap3 project) and is a member of the analysis group of the 1000 genomes project and a co-chair in the GTEx project. He has served in the Board of Reviewing Editors of Science (2006-2011), and until recently he was a Senior Editor in PLoS Genetics and a member of the Board of Reviewing editors for the journal eLife.

Genetics and Genomics of Cardiometabolic traits
Dermitzakis lab have a strong interest in population genomics and genetics of complex traits. they are using various methodologies to understand the role of genetic variation in phenotypic variation. they also aim to understand what fraction of genetic variation is harbored within functional elements of the human genome and develop methodologies for their efficient identification. Their main focus is on genome-wide analysis of gene expression variation and cellular phenotypes and association with nucleotide variation with a focus on disease susceptibility. They attempt to detect functional genetic variation in regulatory elements and subsequently use regulatory variation and accurately measured gene expression variation to bridge the genotype with disease phenotypes in association studies. Gene expression variation is interrogated either by deep mRNA sequencing using 2nd generation sequencing technologies or expression arrays. Recently, much of the focus has been on metabolic traits with involvement in projects relating to patient stratification in Type II Diabetes (DIRECT), longitudinal effects on cardiometabolic traits (Chronomics) and pancreatic islet biology using genomic tools and single cell analysi

Funding related to metabolic traits (out of 10 active grants)