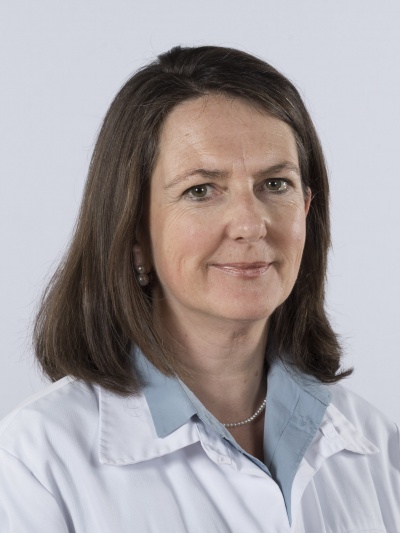 Valérie Schwitzgebel obtained her MD at the University of Bern and her Pediatric Specialty at the University Hospital of Geneva. She did her postdoctoral fellowship in Pediatric Endocrinology at the University of San Francisco, California (UCSF) with Melvin Grumbach, Walter Miller, Selna Kaplan and Felix Conte. In the laboratory of Michael German at UCSF, she worked on pancreas development and discovered neurogenin 3, a marker of pancreatic precursor cells. She is now the Head of the Pediatric Endocrine and Diabetes Unit at the Geneva University Hospital and is pursuing her research in metabolism and diabetes. She was appointed Assistant Professor at the Geneva Faculty of Medicine in 2015.

Monogenic diabetes
Valérie Schwitzgebel is heading a translational project on monogenic diabetes financed by the Swiss National Science Foundation. For this purpose, the lab uses cutting edge techniques in human genetics to investigate the complex mechanisms that underlie the pathophysiology of diabetes with the goal to identify genes or regulatory regions involved in the development or function of the beta cell. The lab also put into place a number of approaches to analyze the function of the genes identified by the screens.

In addition, Valérie Schwitzgebel has initiated a collaborative project with colleagues in Lithuania, funded by the Federal Department of Foreign Affairs of Switzerland. Akin to the work described above, genetic screens for all diabetic children without signs of autoimmunity (i.e. lack of antibodies typically associated with Type 1) or with neonatal diabetes will be established. The project represents a step towards a Swiss cohort of monogenic diabetes with an international counterpart.