The aim of this SNSF Professorship project is to encourage a critical dialogue between historians and medical professionals, as well as with NGO practitioners and representatives working on emergency humanitarianism about its ethical, social, cultural and political dilemmas. By critically looking at past humanitarian operations, we seek to provide better strategies for resolving present and future crises.

Hosted at the Institute for Ethics, History, and the Humanities, our team is comprised of scholars from the fields of history of humanitarian medicine, women and gender history, the history of emotions, and literary and visual culture studies. Additionally, scholars of architectural history examine spatial questions regarding humanitarian work and its physical environments. This multidisciplinary approach enables us to capture humanitarian experience as it was lived both by relief workers and victims, as well as to analyze their reception by political powers and civil society. We collaborate with national and international scholars from the Institute of Gender Studies, the Swiss Center for Affective Sciences, the Center of Humanitarian Action and Research, the Humanitarian and Conflict Response Institute, the University of Queensland and the New York University. We are also working in close relation with the HUG and international organizations, such as ICRC, MSF, as well with institutions like the Red Cross and Red Crescent Museum.

Giving Feminist Perspective to the History of Humanitarian Relief

“Gendering Humanitarian Knowledge: Global Histories of Compassion from the Mid-Nineteenth Century to the Present” was an international conference, which identified key moments in the history of humanitarian relief, in which women were primary agents. The papers given also represent useful methodologies available in Women, Gender and Postcolonial studies for contextualizing and evaluating their actions and situated knowledges. Between their complicity and resistance with the main Western Imperial powers, women have led emergency relief operations since the mid-nineteenth century to the present. Key contributions to this conference will be published as full-length articles in a special issue of the journal Medicine, Conflict and Survival to be published in 2019.

This research examines the activities of war nurses and godmothers on the Yser front from the vantage point of gender history and the history of emotions. Near and far from the trenches, both physically and emotionally, they were women who participated actively in the conflict as humanitarian agents. While nurses in the field were directly confronted with the horrors of combat, at home, volunteer correspondents, or “war godmothers” were present through the letters and packages they sent to the soldiers. By analyzing their personal documents, such as letters, diaries and photographs, and other souvenirs from a wide range of individuals, this research aims to expose the experiential dimensions of female humanitarian work during WWI. Resulting from this research, a PhD dissertation will be defended in collaboration with the Institute of Gender Studies of the University of Geneva.

This research examines the work of swiss filmmaker and anthropologist Jacqueline Veuve (1930-2013). A militant feminist and one of the major figures of anthropological cinema as it was established by her mentor Jean Rouch, Jacqueline Veuve captured the history of several women humanitarians as well as those of internment camp and holocaust survivors, many of whose experiences would have been lost had they not been recorded on film. We will namely examine Veuve’s documentary, Journal de Rivesaltes, about Friedel Bohny-Reiter and her experience as a Nurse for the Swiss Red Cross Aid to Children in the Rivesaltes internment camp near camp from 1941-1942, just before Nazi occupation of the free zone. Archival research on Veuve will provide the basis for an exhibition held in Geneva which will aim to bring to light Veuve’s important and unique contribution to the history of women humanitarians. 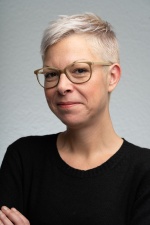