Our group is focused in the field of neuroimmunology, including multiple sclerosis (MS) and its animal model the experimental autoimmune encephalitis (EAE).

In EAE, we investigate several transgenic mice associated with modification of the inflammatory profile, in order to evaluate their effect on disease course. One of our major interests is to study the role hepatocyte growth factor (HGF). We recently showed that HGF, a well known neuroprotective factor, inhibits central nervous system (CNS) autoimmunity and prevent EAE development. By the mean of transgenic mice overexpressing HGF in the CNS, we demonstrated that this effect is mediated through an induction of tolerogenic dendritic cells and Foxp3+ regulatory T cells as well as an induction of a strong T-helper cell type 2 cytokine bias. Our results suggest that, by combining both potentially neuroprotective and immunomodulatory effects, HGF is a promising candidate for the development of new treatments for immune-mediated demyelinating diseases associated with neurodegeneration such as MS.

Our basic research projects also include the effect of HGF-cMet pathway modulation on cancer immunity.

In MS, we investigate the mechanism of action (MoA) of disease-modifying therapy and study the role of biomarkers in the disease. 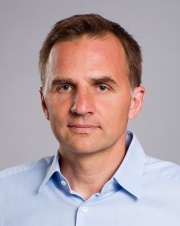