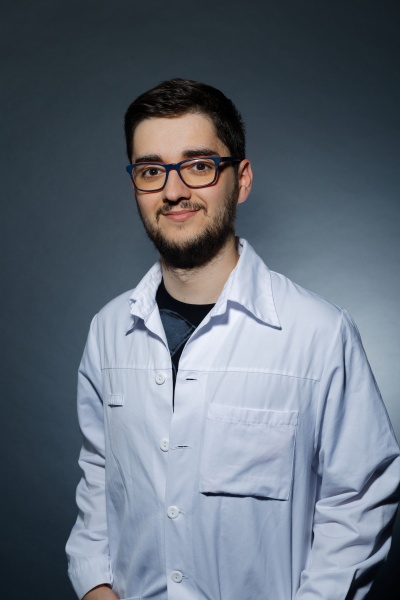 My name is German Nacher-Soler born in 1993 at Alzira, Valencià, Spain. I graduated in Biotechnology by the University of Valencia, where I was enlightened with a molecular biology, genetics and bioinformatics formation. Within the large range of fields covered by the Biotechnology, I always have been very interested in regeneration and biomedicine. Therefore, I further developed my career with a master course in Regenerative Biomedicine on the University of Granada, where I get introduced to the stem cell field and to my biggest desire, the hearing regeneration field, in which I focused my master thesis (Hearing regeneration and stem cells) in collaboration with the “Neurobiology of Hearing” group from the IIBM (Madrid, CSIC-UAM). In summary, I have been trying to focus my formation in the auditory research field, always looking for internships related with the topic. This interest brings us to the present, where I am nowadays working as PhD student in the project “Prevention of cisplatin-induced ototoxicity”, thanks to “Professor Pascal Senn laboratory” at the University of Genève.

My motivations are very diverse and I am sure that the congenital deafness of my eldest brother was the beginning of my interest. I spent my youth watching the inspiring and stubborn efforts of my brother and the support provided by the cochlear implant technology and my parents. Efforts, which leaded him to succeed in his university studies and to obtain a satisfying related job, making me realize the impressive value and potential that these normally underrated people have. However, my motivation also exceeds the familiar motif and I am fascinated by the complex and precise engine that is the human ear, enjoying each new discovery on the field.

I believe that the hearing research field can highly improve deaf people outcome, making easier to the actual society to notice the potential that this people already have.

I am proud and thankful to be part of this group and field, offering my total dedication and interest.

Description of my research project:

For the general public:

Cisplatin is a widely used lifesaving chemotherapy to treat many different types of cancer, like testicular, ovarian, breast and bladder cancers among others. However, its ototoxicity can have a high impact on the social life of treated patients, leading to develop an irreversible hearing loss and tinnitus (ringing in the ears) in one out of five cancer patients treated with this chemotherapy. Thanks to recent research evidences, it is postulated that cisplatin ototoxicity is mediated through reactive oxygen species (ROS) produced by a protein called NADPH oxidase NOX3, which is specifically expressed in the inner ear.

Our ability to hear depends entirely on our auditory receptors, called sensory hair cells, and their associated neurons and supporting cells within the cochlear part of the inner ear. The ROS overproduction after cisplatin injection greatly decreases the amount of hair cells.  Once lost, the neurosensory cells in the cochlea are not replaced, which results in chronic hearing impairments, a devastating and highly prevalent disorder during the infancy and adulthood.

Today, there is no causal therapy and hearing aids only partially alleviate the symptoms in a fraction of the patients. NOX3 was identified by the team of prof. Krause as a putative therapeutic target in cisplatin-induced ototoxicity. Our preliminary results indicate that hearing loss could be prevented through inhibiting the ROS produced by NOX3. Within the proposed project, we aim to develop an effective therapy preventing cisplatin-ototoxicity in a minimal painful animal-model. We will deliver the cisplatin locally in the middle ear, what by our previous experiences will induce minimal stress or negative effects in animal health, getting rid of the drug toxicity in all the body. The treatment will be focused in using a novel therapeutic minigene recently developed. If successful, a straightforward translation into clinical trials to prevent hearing loss in cisplatin-treated patients seems realistic. The expected benefits of this research would be the obtainment of a preventive therapy to reduce this chemotherapy collateral effect, and therefore reducing the difficulty of the patient to recover their normal life after finishing the cancer therapy.

For the scientific public:

Cisplatin (cis-diamminedichloroplatinum) has been shown to be effective against different types of cancers, such as carcinomas, germ cell tumors, lymphomas, and sarcomas1. Also, it has been used against testicular, ovarian, cervical, breast, bladder, neuroblastoma, head-neck and brain tumors2. His antitumor effect mechanism is related with his ability to interfere with the DNA replication.

Nevertheless, cisplatin has different side effects, being one of them an important and frequent ototoxicity. Therefore, hearing loss (HL) and tinnitus (sensation of ringing in the ear) are common outcomes in patients following a platinum chemotherapy3,4. Some estimations show that 70% of children exposed to this therapies develop some kind of HL, and 50% of those young affected patients suffer from a severe HL5. In adults hearing loss affects 10-25% of patients6. Addressing cisplatin ototoxicity requires deeper understanding of the cisplatin molecular consequences on treated cells and in particular, ROS could be an important mediator of the cisplatin side effects.

Reactive oxygen species have been shown to be associated with several types of hearing loss, including noise-induced hearing loss, Meniere’s disease and presbycusis7. NOX NADPH oxidases are a family of enzymes, whose main products are reactive oxygen species. Of importance, NOX3 is strongly and specifically expressed in the inner ear8 (Figure 1). Specifically, NOX3 isoform is highly expressed in the vestibular system and plays a key role in the formation of the otoconia9. Otoconia formation is thought to occur during development, and no role of NOX3 in the adult vestibular system has been described. However, in parallel, our group reported particularly high expression of NOX3 in the organ of Corti and in the spiral ganglia (Figure 1), which are essential structures in the sound perception. Despite this specific expression, a physiological role of NOX3 in the cochlear system has not been found so far. However, it was experimentally probed that the antineoplastic drug cisplatin induces an increase in the NOX3 production of ROS, observed in vitro, suggesting a potential role of NOX3 in cochlear damages (Figure 2)10. Additionally, a recent study concluded that cisplatin is accumulated in the cochlea, where it is retained indefinitely following chemotherapy11.

Cisplatin induced-ROS production, combined to the poor regenerative capacity of hair cells and SGN, could be the main reason behind the ototoxicity and susceptibility to this drug. Our hypothesis suggests, that the decrease of NOX3 related ROS production, associated with the cisplatin chemotherapy, could report an ototoproctective effect in a mouse pre-clinical model7. A therapeutic minigene developed by Professor Krause laboratory (UNIGE, CMU)12, will be used as a molecular weapon to target and reduce NOX3 activity in the cochlea. Our project aims to accomplish the following main steps to develop a functional protective therapy:

-          The development of a robust 3R pre-clinical model of cisplatin-induced ototoxicity in mouse.

-          The development and validation of an innovative NOX3-targeted therapy to prevent cisplatin-induced ototoxicity.