During development, neural circuits in the mammalian neocortex are initially wired up in a stereotypic way, guided by a myriad of intracellular and extracellular molecular cues. Later, connectivity is further sculpted by spontaneous and sensory-evoked activity. Although activity dependent plasticity is most robust during development, it has been shown that neural circuits remain plastic in the adult brain. For example, most sensory representations in the neocortex change in size and/or location upon peripheral lesions and amputations, or even after more subtle changes in experience throughout life. This so called functional plasticity depends on changes in the strength of established synaptic connections, but could also involve structural alterations, including synapse formation and elimination. We are interested in these structural and morphological aspects of synaptic plasticity in the adult brain, and explore the possibility that structural plasticity is involved in long term memory storage, the acquisition of training/experience- based skills, and in functional adaptations of cortical circuits after lesions. Using long-term imaging techniques in vivo we monitor functional and structural changes in the mouse cortex. The pictures show fluorescently labeled neurons, dendrites and axons, imaged through a cranial window using 2-photon laser scanning microscopy. 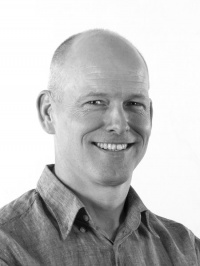