Vulnerability to psychiatric disorders is likely to have an early developmental origin. Understanding the molecular/cellular mechanisms controlling the assembly of cortical circuits and how abnormal neocortical circuit formation leads to psychiatric disorders is a fundamental question. Projects in the laboratory are focused on understanding the molecular/cellular effects of psychiatric-relevant genes during embryonic neocortical development using cell-specific in utero electroporation approaches. Among relevant molecular targets we are currently focusing on different subtypes of serotonin receptors that are specifically expressed in neuronal subtypes during the assembly of cortical circuits. Recent approaches in the laboratory aim at understanding the role of these different serotonin receptor during the migration/differentiation of different neuronal subtypes. Finally, studies are devoted to understand the genes that control the identity/diversity of specific interneuron subtypes that are derived from the caudal ganglionic eminence (CGE) versus the medial ganglionic eminences (MGE). These projects will lead to a better understanding of the formation of cortical circuits and will provide insights on the molecular/cellular changes that underly developmental vulnerability to psychiatric disorders. 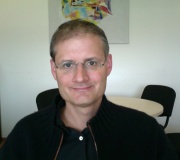