The aim of this gathering - colloquium and public round-table - is to brainstorm on ways to adequately theorize and empirically ground discussions on legitimate social order in contemporary industrialized capitalist democracies, based on the case of Japan.

Following the erosion of “trente glorieuses socio-economic compromises” since the neoliberal policy turn, the legitimacy of domestic social orders has become increasingly contested across Western countries over the last one or two decades. Japan, a country with a rigidly normative social system organized around institutions of coordinated capitalism, where livelihood security is largely tied to the type of employment of a family member and its status as employee of an organization, has witnessed comparatively little outright questioning of the social order and its legitimacy. As Yves Tiberghien points out, the Japanese government has even started to conceptualize issues of social cohesion in Western countries as threat for the global order and sees room for giving advice based on its experience of stable social order.

What is the case for Japan as an example for legitimate social order? How much is the de facto stability grounded in actual legitimacy of the social order, and to the extent that it is, what are the determinants of this legitimacy and do they warrant its recommendation? Might the assumption that some inequality in social positions – insofar as it is a reflection of ability and responsibility – is legitimate (as opposed to the assumption, likely more prominent in Western debates, that inequalities tend to be unjustified) be the relevant point to be considered?

The issue to understand the social order and its legitimacy (what is it?) takes on its deeper meaning in the face of the inevitability to take position regarding the related issues of the desirability and the feasibility (what could and should it be?) of what constitutes legitimate social order at this singular point in time.

Legitimate Social Order in the 21st Century: Lessons from Japan

The Japanese Social Cohesion Paradox: What Can We Learn from Twenty Years of Targeted Neo-Liberal Reforms within an Enduring Social Contract?

Abenomics and Labour Market Reforms: Towards Contestation and Disorganization

The Making of Japan’s Social Order: Is the Postwar Social Contract Still Viable in the 21st Century?

Colloquium (13h15-17h00): open to everyone upon registration online 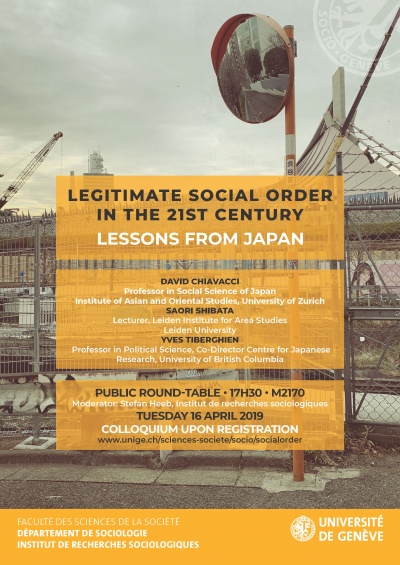