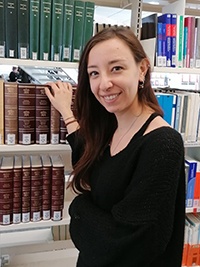 Marta Giunta Martino is a PhD candidate in Political Science at the University of Geneva. She received an MA in World Politics & International Relations from the University of Pavia. Marta has been awarded a Swiss Government Excellence Scholarships for Foreign Scholars and Artists for the 2020-2021 Academic Year. She has written on themes of civil disobedience and democracy, including a review article published in Ethical Theory and Moral Practice.

Her research project, entitled "Officeholders' disobedience and the normative grounds of institutional trustworthiness," has been outlined in tandem with the research under the EnTrust Project. Marta's research consists mainly of an in-depth analysis of the grounds of officeholders' contestatory reactions to deficits of office accountability as indicative of a lack of endogenous institutional trustworthiness. She is also co-coordinator of the Geneva Colloquium in Political Theory.