The « Square Kilometre Array » (SKA), the most sensitive radio telescope to date, will allow researchers to study the formation of the first stars and galaxies. Operation of the telescope is to be managed by the international Square Kilometre Array Observatory (SKAO) organisation. The Federal Council decided on 17 December that Switzerland will join the SKAO, following Parliament's decision to provide the funding necessary for full membership by 2030, and officially signed the adhesion on 19th January 2022 in SKAO headquarters in Jodrell Bank (UK). 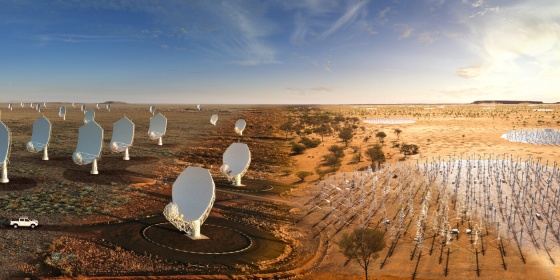 Composite image of the real antennas already on site and
artist's impression of the full deployment when completed. © SKA

The University of Geneva and the Department of Astronomy have been promoting the Swiss membership to SKAO since many years. Geneva scientists are involved in several groups preparing the science that will be done with this radio telescope, and will use it in particular for observational cosmology, the study of dark matter, of the physics of galaxies, and to unravel the chemistry of stars and the origins of life on planets. Researchers from the Department of Informatics are also strongly involved in the preparation of this incredible telescope, which requires new approches to treat the overwhelming flux of data that will be produced by this telescope.

As part of the 2021–2024 ERI Dispatch, the Federal Assembly approved a guarantee credit of CHF 8.9 million for Switzerland to join the SKAO. SERI later carried out an analysis in conjunction with Swiss industry and research stakeholders having an interest in the SKAO. The results showed that only full membership would guarantee a satisfactory return on investment for the country. The Federal Council therefore requested that Parliament approve a further CHF 24.7 million to fund Swiss participation in the construction and operation of the SKAO until 2030. After Parliament agreed to this increase in December 2021, the Federal Council approved Swiss participation in the SKAO, clearing the way for immediate membership.

Switzerland’s participation in international research infrastructures gives the country direct access to experiments and the latest data. Whereas many of the large international research infrastructures in which Switzerland participates are dominated by a strong European core group, the SKAO is managed and funded by three large Commonwealth states: the UK, Australia and South Africa.

The SKAO international observatory has telescope sites in South Africa and Australia along with its Global Headquarters at Jodrell Bank in the UK, which will manage the construction and remote monitoring of the telescope. The SKA is the world’s most sensitive radio telescope. It is expected to deliver revolutionary discoveries about the history of the universe, primarily relating to the formation and development of the first stars and galaxies. Other important areas of research include the role of cosmic magnetism, the nature of dark matter, life forms in the universe, and dark energy and gravity.