The majority of exoplanets discovered to date have been discovered using the transit method. This technique is based on a mini eclipse caused when a planet passes in front of its star. The decrease in luminosity observed makes it possible to deduce the existence of a planet and to estimate its diameter, after the observations have been periodically confirmed. However, theory predicts that in many planetary systems, interactions between planets alter this periodicity and make their detection impossible. It is in this context that a team of astronomers from the University of Geneva (UNIGE), the University of Bern (UniBE), and the NCCR PlanetS, Switzerland, in collaboration with the company Disaitek, used artificial intelligence (AI) applied to image recognition. They taught a machine to predict the effect of interactions between planets, making it possible to discover exoplanets that were impossible to detect until now. The tools developed, published in the journal Astronomy and Astrophysics, could be used on Earth to detect illegal dumps and waste dumps. 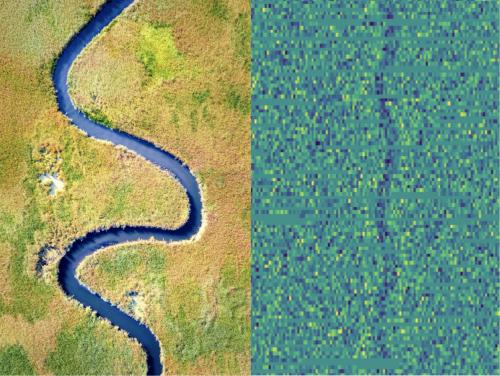 The method uses a data representation where the presence of a planet (right) is seen as a river in the sky (left). The image on the right shows the measured luminous flux of the star Kepler-36 with the plot of eclipses due to the planet Kepler-36 b.

Detecting a planet by the transit method is a long process. Finding the signal induced by small planets in the data can be complex, if not impossible with the usual techniques, in the case where interactions between planets alter the periodicity of the transit phenomenon. To counter this difficulty, it is necessary to develop tools that can take this effect into account.

“This is why we thought of using artificial intelligence applied to image recognition”, explains Adrien Leleu, a researcher in the Department of Astronomy at the UNIGE Faculty of Science and the NCCR PlanetS. It is indeed possible to teach a machine, using a large number of examples, to take into account all the parameters and predict the effect of interactions between planets in a pictorial representation of the induced effect. To do this, the astronomers have joined forces with the company Disaitek through the NCCR’s Technology & Innovation Platform.

“The type of AI used in this project is a neural network whose aim is to determine, for each pixel in an image, the object it represents”, explains Anthony Graveline, president of Disaitek. Used in the context of an autonomous vehicle, this algorithm makes it possible to identify the road, the pavement, the signs and the pedestrians perceived by the camera. In the context of exoplanet detection, the aim is to determine, for each measurement of the star’s luminosity, whether the eclipse of a planet is observed. The neural network makes its decision by cross-referencing all available observations of that star with the range of configurations seen during its training.

“From the first implementations of the method, we discovered two exoplanets – Kepler-1705b and Kepler-1705c – that had been comple- tely missed by previous techniques”, reveals Adrien Leleu. The planetary systems thus discovered are a gold mine for our knowledge of exoplanets, and more particularly of terrestrial-type planets, which are generally difficult to characterise. The method developed not only makes it possible to estimate the radius of planets, but also provides information on their mass, and therefore on their density and composition. “The use of AI, in particular of ‘deep learning’ as in this paper, is becoming increasingly widespread in astrophysics, whether to process observational data, as we did here, or to analyse the results of gigantic numerical simulations producing terabytes of data. What we have developed in this study is a new example of the fantastic contribution that these techniques can make to our field, and probably to all fields of research”, notes Yann Alibert, Professor at the University of Bern, and Scientific Officer of the NCCR PlanetS.

While this technique is proving effective for astronomical observation, it can be just as useful for observing the Earth and its environment. “In developing this technology, we quickly realised its potential for application to other problems for which a small amount of data is available”, says Grégory Châtel, R&D manager at Disaitek. Using very high-resolution satellite images, Disaitek is now using this AI to deal with environmental problems, in particular the detection of illegal dumping. This scourge, which is constantly on the increase, has no clear answer with traditional means.

Link to the article on A&A