On 22 October 2019, the beautiful first X-ray images of the eROSITA telescope were presented to the public at the Max Planck Institute for Extraterrestrial Physics (MPE) in Garching. After an extended commissioning phase, since 13 October all seven X-ray telescope modules with their custom-designed CCD cameras have been observing the sky simultaneously. The first combined X-ray images of our neighbouring galaxy, the Large Magellanic Cloud, and a pair of interacting clusters of galaxies at a distance of about 800 Million lightyears, show remarkable details and demonstrate the promise of the ambitious science programme planned with the space-borne telescope. 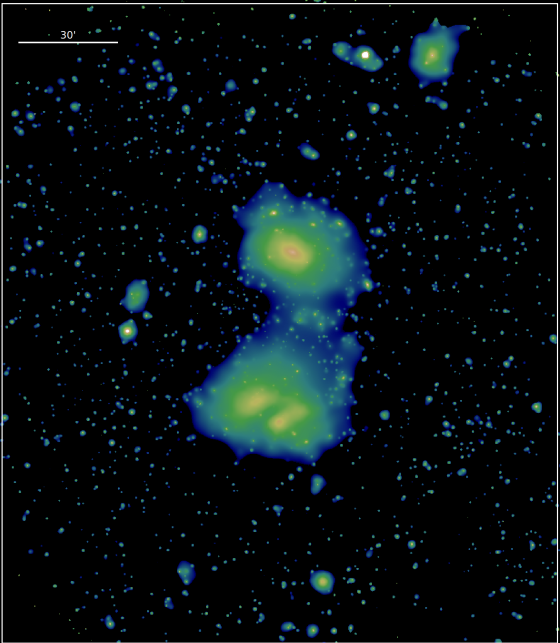 Image the two interacting galaxy clusters A3391, to the top of the image,
and the double-peaked cluster A3395, to the bottom (more details below).

“Now we can start reaping the fruits of more than ten years of work. We are all impressed by the beautiful first images from our telescope,” enthuses Peter Predehl, Principal Investigator of eROSITA. “To meet our science goals we needed enough sensitivity to detect the most distant clusters of galaxies in the X-ray Universe over the whole sky, and resolve them spatially. These First Light images show that we can do exactly that, but we can go a lot further. The CCD cameras are state-of the art with superb spectral and timing resolution. The potential for new discoveries is immense.” The eROSITA First Light images were obtained in a series of exposures of all seven telescope modules with a combined integration time of about one day for both the Large Magellanic Cloud (LMC), our neighbouring galaxy, and the A3391/3395 system of interacting clusters of galaxies at a distance of about 800 Million lightyears. 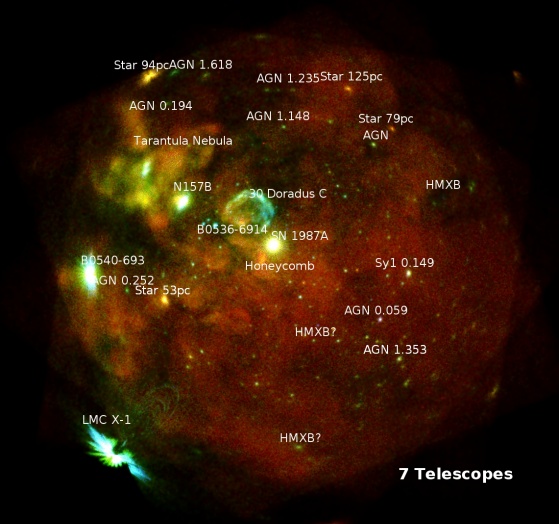 Image of our neighbouring galaxy, the Large Magellanic Cloud, observed in series of exposures with all seven eROSITA telescope modules taken from 18 to 19 October 2019 (more details below).
© TF.Haberl, M. Freyberg and C. Maitra, MPE/IKI

“X-rays give us a unique view of the Universe”, explains Kirpal Nandra, director of High Energy astrophysics at MPE. “Looking at an apparently normal star, we might see an orbiting white dwarf or neutron star in the process of devouring its companion. Visible light shows the structure of a galaxy traced by its stars, but the X-rays are dominated by supermassive black holes growing at their centres. And where we see clusters of galaxies with optical telescopes, X-rays reveal the huge reservoirs of gas filling the space between them and tracing out the dark matter structure of the Universe. With its performance demonstrated, we now know that eROSITA will lead to a breakthrough in our understanding of the evolution of the energetic Universe.”

Reaching further out into the Universe, the eROSITA image of the A3391/3395 system of interacting clusters of galaxies highlights the dynamical processes which lead to the formation of gigantic structures in the Universe. The clusters, appearing as large, elliptical nebulae in the eROSITA images, span tens of millions of lightyears across, and contain thousands of galaxies each. Clusters are one of the main science targets for eROSITA; astronomers expect to find some 100,000 X-ray emitting galaxy clusters as well as several million active black holes in the centres of galaxies during its 4-year all-sky survey in the soft and hard X-ray bands.

Launched on 13 July 2019 as part of the Russian-German Spektrum-Roentgen-Gamma (SRG) space mission, which also includes the Russian ART-XC telescope, eROSITA completed its 1.5 million kilometre journey to the second Lagrange point (L2) of the Earth-Sun-system in late September and has now – 100 days after launch – entered an orbit around L2. The commissioning phase of the telescope was officially completed on 13 October. While the scientific performance of the system is outstanding, this first phase was not problem-free.

The development and construction of the eROSITA X-ray telescope was led by the Max Planck Institute for Extraterrestrial Physics with contributions from the Institute for Astronomy and Astrophysics of the University Tübingen, the Leibniz Institute for Astrophysics Potsdam (AIP), University Observatory Hamburg, and Dr. Karl Remeis Observatory Bamberg, with the support of the German space agency DLR. Dominique Eckert of the Departement  of astronomy of the University of Geneva is a member of the eROSITA team in charge of the data analysis for the observations of the double cluster A3391/95. The Ludwig-Maximilians-Universität Munich and the Argelander Institute for Astronomy of the University Bonn also participate in science preparation for eROSITA. The Russian partner Institute is the Space Research Institute IKI in Moskau; NPOL, Lavochkin Association, Khimky near Moskau, is responsible for the technical implementation of the whole SRG mission, which is a joint project of the Russian and German space agencies, Roscosmos and DLR.

This eRosita image shows the two interacting galaxy clusters A3391, to the top of the image, and the double-peaked cluster A3395, to the bottom, highlighting eROSITAs superb view of the distant Universe. They were observed in series of exposures with all seven eROSITA telescope modules taken from 17 to 18 October 2019. The individual images were subjected to different analysis techniques, and then coloured in different schemes to highlight the “bridge” or “filament” between the two clusters, confirming the suspicion that these two huge structures actually interact dynamically. The eROSITA observations also show hundreds of point-like sources, signposting either distant supermassive black holes or hot stars in the Milky Way.

This image shows our neighbouring galaxy, the Large Magellanic Cloud, observed in series of exposures with all seven eROSITA telescope modules taken from 18 to 19 October 2019. The diffuse emission originates from the hot gas between the stars. The nebulous structures in the image are mainly supernova remnants, i.e. stellar atmospheres expelled in huge explosions at the end of a massive stars’ lifetime. The most prominent one, SN1987A, is seen close to the centre as an almost circular, bluish cloud. A host of other sources in the LMC itself include accreting binary stars or stellar clusters with very massive young stars (up to 100 solar masses and more). There are also a number of point sources, either foreground stars from our home galaxy or distant Active Galactic Nuclei.