The European Space Observatory’s Very Large Telescope (VLT) has achieved a new milestone thanks to its ESPRESSO tool. With this, all four of VLT’s 8.2-meter Unit Telescopes are working together as a single giant telescope. This is a huge achievement for the VLT, which was first thought of back in the 1980s, basically transforming it into the world’s largest optical telescope. 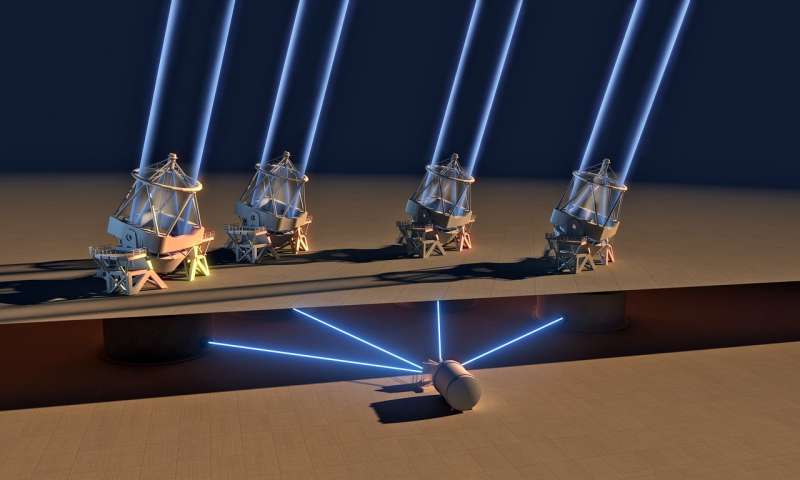 One of the original design goals of ESO’s Very Large Telescope (VLT) was for its four Unit Telescopes (UTs) to work together to create a single giant telescope. With the first light of the ESPRESSO spectrograph using the four-Unit-Telescope mode of the VLT, this milestone has now been reached [1].

After extensive preparations by the ESPRESSO consortium (led by the Astronomical Observatory of the University of Geneva, with the participation of research centres from Italy, Portugal, Spain and Switzerland) and ESO staff, ESO’s Director General Xavier Barcons initiated this historic astronomical observation with the push of a button in the control room.

ESPRESSO instrument scientist at ESO, Gaspare Lo Curto, explains the historical significance of this event: “ESO has realised a dream that dates back to the time when the VLT was conceived in the 1980s: bringing the light from all four Unit Telescopes on Cerro Paranal together to feed a single instrument!” When all four 8.2-metre Unit Telescopes combine their light-collecting power to feed a single instrument, the VLT effectively becomes the largest optical telescope in the world in terms of collecting area.

Two of the main scientific goals of ESPRESSO are the discovery and characterisation of Earth-like planets and the search for possible variability of the fundamental constants of physics. The latter experiments in particular require the observation of distant and faint quasars, and this science goal will benefit the most from combining the light from all four Unit Telescopes in ESPRESSO. Both rely on the ultra-high stability of the instrument and an extremely stable reference light source.

More and videos at: https://www.eso.org/public/usa/news/eso1806/