The filamentary structure in which galaxies form, known as the cosmic web, is one of the main predictions of the current paradigm of galaxy formation. Today, an international team of astronomers, led by the Centre de Recherche Astrophysique de Lyon (CNRS) in collaboration with researchers from the Department, has observed for the first time the filaments that make up the cosmic web in the Hubble Ultra Deep Field. This discovery was made with the MUSE 3D spectrograph mounted on the Very Large Telescope (VLT) in Chile. These results, published in the Astronomy & Astrophysics journal, suggest that the observed signal is not due to the cosmic ultraviolet background as initially expected, but is instead produced by a numerous population of small faint galaxies. 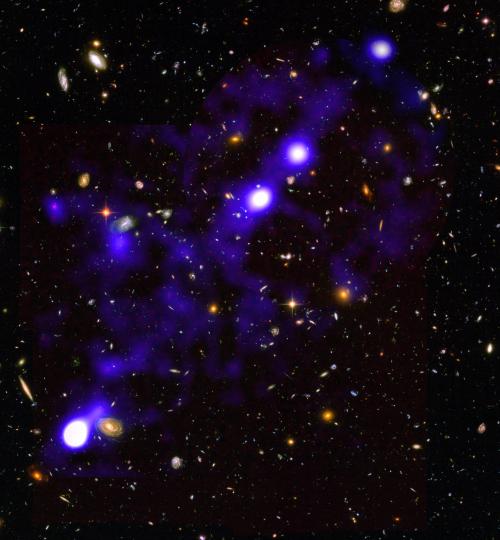 One of the hydrogen filaments (in blue) discovered by MUSE in the Hubble Ultra-Deep Field. It is located in the Fornax constellation at a distance of 11.5 billion light years, and stretches across 15 million light years. The image in the background is from Hubble. © Roland Bacon, David Mary, ESO and NASA.

According to the cosmological model, the matter distribution in the Universe follows a filamentary structure along which galaxies form. The cosmic web’s light emission is expected to be powered by the diffuse ultraviolet background able to irradiate the gas filaments, thus generating a weak detectable glow. "A direct detection of the gas distribution in the cosmic web would provide us with crucial information to better constrain our models and help us understand how galaxies form and interact with their environment in the early Universe.", explains Thibault Garel, researcher at the Astronomy Department of the Faculty of Science of UNIGE.

An extremely deep observation with MUSE

The predicted signal is however very weak such that a direct observation has proven quite challenging with existing facilities. "With MUSE’s first light in 2014 and its coupling with the VLT adaptive-optics in 2017, we realised that we eventually had the required capabilities to probe the cosmic web, which is considered as the Holy Graal of extragalactic astronomy for nearly 40 years.", says Roland Bacon, researcher at CNRS and lead-author of the study. The first observations targeted bright active galaxy nuclei - or quasars - that emit intense UV radiation able to light up gas clouds in their vicinity. "Yet, quasars are rare objects located in very peculiar environments of the cosmic web, known as knots, which correspond to overdense regions that are not representative of the web’s filaments where most galaxies, like ours, did form.", continues Roland Bacon.

During 8 months, astronomers of the MUSE consortium carried out a 140 hours observational campaign on a single region of the sky located in the Hubble Ultra Deep Field. This spectroscopic survey became the deepest survey ever conducted.

A tremendous amount of dwarf galaxies

In addition to the detection of a large number of individual galaxies - roughly one hundred times more than what is usually observed, a careful analysis has revealed several diffuse extended filamentary structures. "These filaments are located in the early Universe, between one and two billions years after the Big Bang, and extend over scales of several million light-years", says Thibault Garel. One of the most striking results of this discovery is that the observed diffuse emission is probably not due to the ultraviolet background but is instead the consequence of the presence of a huge number of small galaxies that are too faint to be detected individually. "In the current paradigm, small galaxies can be seen as building blocks that assemble over time to form more massive objects, like our galaxy the Milky Way. The existence of such a large population of dwarf galaxies has considerable implications for our understanding of galaxy formation and evolution. ", says Thibault Garel.

This discovery is a significant step forward in the exploration of the early Universe and pave the way for future theoretical and observational studies. "The characterisation of the cosmic web will be one of the main goals of BlueMUSE, a next-generation VLT instrument to start operating around 2030, for which the UNIGE is a major partner.", says Anne Verhamme, professor in the Astronomy Department and co-I of the BlueMUSE project.

Link to the article in A&A

Link to the article in arXiv