First Light for ESPRESSO — the Next Generation Planet Hunter

The Echelle SPectrograph for Rocky Exoplanet and Stable Spectroscopic Observations (ESPRESSO) has successfully made its first observations. Installed on ESO’s Very Large Telescope (VLT) in Chile, ESPRESSO will search for exoplanets with unprecedented precision by looking at the minuscule changes in the light of their host stars. For the first time ever, an instrument will be able to sum up the light from all four VLT telescopes and achieve the light collecting power of a 16-metre telescope. 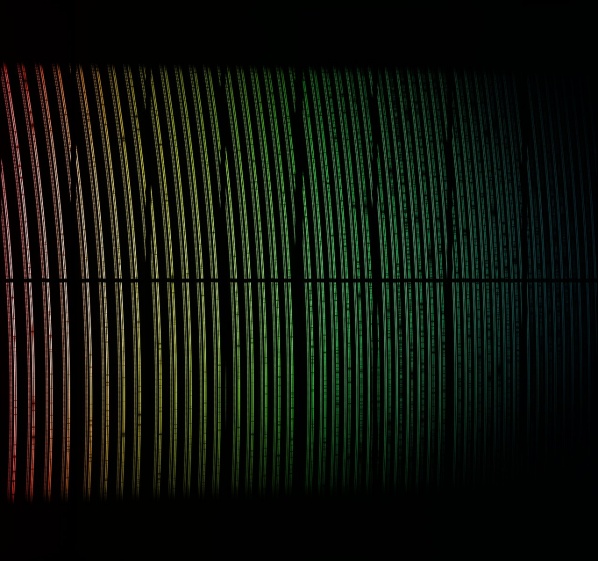 ESPRESSO has achieved first light on ESO’s Very Large Telescope at the Paranal Observatory in northern Chile [1]. This new, third-generation echelle spectrograph is the successor to ESO’s hugely successful HARPS instrument at the La Silla Observatory. HARPS can attain a precision of around one metre per second in velocity measurements, whereas ESPRESSO aims to achieve a precision of just a few centimetres per second, due to advances in technology and its placement on a much bigger telescope.

The lead scientist for ESPRESSO, Francesco Pepe from the University of Geneva in Switzerland, explains its significance: “This success is the result of the work of many people over 10 years. ESPRESSO isn’t just the evolution of our previous instruments like HARPS, but it will be transformational, with its higher resolution and higher precision. And unlike earlier instruments it can exploit the VLT’s full collecting power — it can be used with all four of the VLT Unit Telescopes at the same time to simulate a 16-metre telescope. ESPRESSO will be unsurpassed for at least a decade — now I am just impatient to find our first rocky planet!”

ESPRESSO can detect tiny changes in the spectra of stars as a planet orbits. This radial velocity method works because a planet’s gravitational pull influences its host star, causing it to “wobble” slightly. The less massive the planet, the smaller the wobble, and so for rocky and possibly life-bearing exoplanets to be detected, an instrument with very high precision is required. With this method, ESPRESSO will be able to detect some of the lightest planets ever found [2].

Instrument scientist Gaspare Lo Curto (ESO) is delighted: “Bringing ESPRESSO this far has been a great accomplishment, with contributions from an international consortium as well as many different groups within ESO: engineers, astronomers and administration. They had to not just install the spectrograph itself, but also the very complex optics that bring the light together from the four VLT Unit Telescopes.”

Although the main goal of ESPRESSO is to push planet hunting to the next level, finding and characterising less massive planets and their atmospheres, it also has many other applications. ESPRESSO will also be the world’s most powerful tool to test whether the physical constants of nature have changed since the Universe was young. Such tiny changes are predicted by some theories of fundamental physics, but have never been convincingly observed.

When ESO’s Extremely Large Telescope comes on line, the instrument HIRES, which is currently under conceptual design, will enable the detection and characterisation of even smaller and lighter exoplanets, down to Earth-like planets, as well as the study of exoplanet atmospheres with the prospect of the detection of signatures of life on rocky planets.

[2] The radial velocity method allows astronomers to measure the mass and orbit of the planet. Combined with other methods such as the transit method, more information can be inferred — for example, the size and density of the exoplanet. The Next-Generation Transit Survey (NGTS) at ESO’s Paranal Observatory hunts for exoplanets in this way.

ESO is the foremost intergovernmental astronomy organisation in Europe and the world’s most productive ground-based astronomical observatory by far. It is supported by 16 countries: Austria, Belgium, Brazil, the Czech Republic, Denmark, France, Finland, Germany, Italy, the Netherlands, Poland, Portugal, Spain, Sweden, Switzerland and the United Kingdom, along with the host state of Chile and by Australia as a strategic partner. ESO carries out an ambitious programme focused on the design, construction and operation of powerful ground-based observing facilities enabling astronomers to make important scientific discoveries. ESO also plays a leading role in promoting and organising cooperation in astronomical research. ESO operates three unique world-class observing sites in Chile: La Silla, Paranal and Chajnantor. At Paranal, ESO operates the Very Large Telescope and its world-leading Very Large Telescope Interferometer as well as two survey telescopes, VISTA working in the infrared and the visible-light VLT Survey Telescope. ESO is also a major partner in two facilities on Chajnantor, APEX and ALMA, the largest astronomical project in existence. And on Cerro Armazones, close to Paranal, ESO is building the 39-metre Extremely Large Telescope, the ELT, which will become “the world’s biggest eye on the sky”.

The team on the VLT platform

The displays with the first data

The first light in the control room

A partial view of a reduced spectra

Everybody in the meeting room