The story of a cosmic striptease

A bright star visible to the naked eye, but until recently a star that was of no particular interest to scientists. Gamma Columbae, a star in the Columba constellation located some 900 light years from Earth, has just revealed its astonishing history: it is thought to be the heart of an old binary star whose envelope disappeared when it swallowed its companion star to which it was gravitationally bound. An international team of scientists, including astrophysicist Georges Meynet of UNIGE, has just announced this discovery in the journal Nature Astronomy. 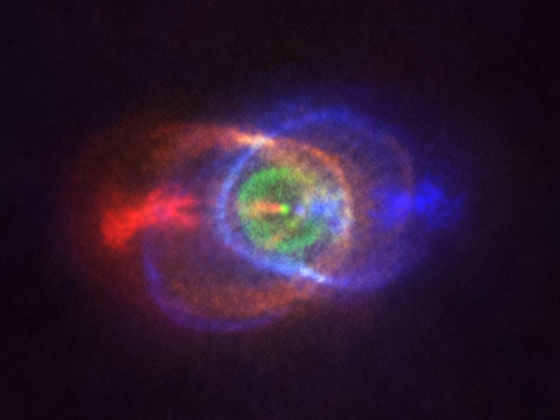 ALMA telescope image of a star with probably the same history as Gamma Columbae. © Wikimedia

The interest in this star was almost the result of chance: scientists had noticed that its surface chemical composition was very different from that of stars of comparable mass. "It corresponds to the composition that one would expect to find in the central regions of stars that are three or four times more massive, where the nuclear reactions modify the composition of matter," explains Georges Meynet. He therefore sought an explanation.

With his team, he simulated the evolution of the star by assuming that it was originally three times more massive than it is now and by removing its outer envelope. The result of this simulation tallies with the observations, indicating that Gamma Columbae could be the exposed heart of what was initially a more massive star. Even better: since single star models cannot explain the loss of an envelope, the scientists think that Gamma Columbae originated from a binary system, in other words that it used to orbit with another star around a common centre of gravity. "Our hypothesis is that it swallowed its companion. The phenomenon could have triggered significant reactions including, in particular, the ejection of its own envelope," explains Georges Meynet.

Explosion predicted in 1 to 2 million years

Based on its current composition, Gamma Columbae is thought to have reached 90% of its estimated life span of at least ten million years. It may have less than 2 million years of life left before exploding. "It is currently in a fairly short phase of evolution that is very rarely observed," enthuses Georges Meynet, who now has an object of study with which he can delve deeper into the history and fate of binary stars. At the moment, the scientists do not know whether such low mass naked core stars are rare or whether they are just not adequately detected. But the discovery of the properties of Gamma Columbae shows how a star that has been open to observation for many years could hide a much more complex history than imagined, raising hopes that other stars will one day also reveal unexpected properties.

Link to the article on Nature Astronomy