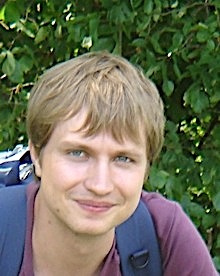 Stellar evolution models rely essentially on codes that consider stars as unidimensional. Numerous physical processes taking place inside stars are multi-dimensional by nature: turbulence linked to convection or rotation, magnetic fields, etc. To include these processes into 1d codes, a lot of simplifications have to be made.

During the past few years, the development of numerical computing and hydrodynamics code based on the parallelisation of the computation between several processors has allowed one to simulate small regions inside stars for a short time of their life in multi-d and without simplifications.

In collaboration with specialists of hydrodynamics modelling (David Arnett, Casey Meakin, Maxime Viallet, Raphael Hirschi), we are currently computing several simulations of various nuclear burning phases, taking place inside convective shells surrounding the core of massive stars. Our goal is to understand how the convective zone boundary is moving as a function of time, and how stellar matter is mixed through this interface. Our biggest simulations have domains consisting in more than 3 billion cells, and the computation are spread among tens of thousands of processors.

In collaboration with Fritz Roepke and Phillip Edelmann, we are making simulations of the Richardson instability, which is developing when strong angular velocity gradients are found inside the star. We are interested in understanding how chemical species and angular momentum are transported by this instability, and to test whether the prescrpitions used in 1d codes are valid or not.

Tests of the stellar physics

The results of the numerical simulations of stellar evolution have to be compared with observations to decide if they are modelling the star in a realistic manner. Since a few years, I have work a lot on the use of a peculiar class of stars, the blue supergiants, as tests of stellar physics.

Indeed, these stars allow one to test in a very sensitive way the internal mixing through their variability characteristics, their surface chemical composition, and gravity.

That way, we have shown that a family of blue supergiant, called apha Cygni varaibles, are probably very evolved stars that have lost a lot of mass in previous phases of their life, during a red supergiant phase.

During the last few years, I have developed the population synthesis code "SYCLIST", which is able, among others, to build synthetic stellar populations accounting for their initial mass, velocity, and angle of view distributions.

With this code, we can efficiently compare the results of stellar modelling with star clusters, or more complex populations of stars composed of several generations of stars.