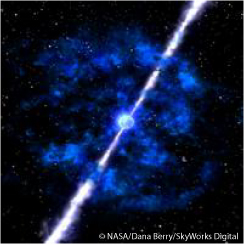 The progenitors of long Gamma Ray Burst (GRB) represent a real challenge for stellar physics. Every day, one GRB occurs in the whole Universe. They are among the most energetic events in the Universe after the Big Bang. According to the collapsar scenario, the GRB results from interactions in relativistic jets. These jets draw their energy from the energy released by matter falling onto a new born black hole through an accretion disk. For such disk to be present, an important condition is that the matter has a sufficiently high angular momentum, otherwise the black hole will swallow immediatly the surrounding material. On the other hand, for the burst to be visible, the stellar progenitor must have lost its outer envelope, so that the gamma radiation can escape freely into space. The association in a few case of type Ic supernova (no H and no He detected in the spectrum) with GRB well confirms the removal of the outer envelope.

The necessity to both keep a high angular momentum and remove the outer envelope is not an easy situation, since the removal of the envelope will also remove angular momentum due to the core-envelope coupling exerted by the various instabilities triggered by rotation (shear instability, meridional circulation, transport of angular momentum by the magnetic field). The determination of the GRB progenitors is not only a wonderful challenge for stellar physics, but may give indications on how GRBs could be used to probe the deep Universe.

Models accounting for the effects of rotation have been computed until the pre-supernova stage (see Hirschi & al. 2005) for different metallicities. The main resul coming from these computations is that only stars of low metallicity are able to fullfill simultanously the conditions mentionned above, indicating that GRBs might occur only in low metallicity regions. This conclusion appears to be well in agreement with various observations supporting a metal-poor environment for GRBs. In the continuity of the work of Raphael Hirschi, Cyril Georgy has begun in October 2006 a PhD work aimed at characterizing the GRB progenitors. He will compute models accounting for the wind anisotropies induced by rotation. Anisotropic mass loss implies that hot stars lose preferentially material along the rotational axis, allowing them to lose matter without losing too much angular momentum. He will be also in a good position to study the scenarios leading to the various types of core-collapse supernovae at different metallicities, as well as the question of the rotational rate of the pulsars.