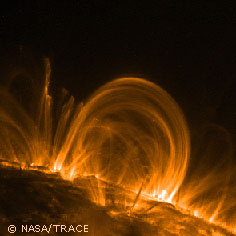 In the many mixing processes induced by rotation, the amplification of the magnetic field through a dynamo mechanism may be an important one. It can be produced in radiative layers of stars in differential rotation. Even a small toroidal field is subject to an instability (called the Tayler instability), which generates a vertical field component. Differential rotation winds up this vertical component, so that many new horizontal field lines are produced, building a much stronger horizontal field. This is the dynamo mechanism described by Spruit (2002).

In a first paper (see A&A 411, 543), André Maeder and Georges Meynet have tested this dynamo, imposing the following condition: the energy of the magnetic field generated by the Tayler-Spruit dynamo cannot be larger than the energy excess present in the differential rotation.

They have further explored the interplay between magnetic field and other rotational instabilities like meridional circulation. In the framework of Patrick Eggenberger’s PhD work, the effects of magnetic field has also been studied in solar mass stars, and it has been shown that it would be needed to account for the flat rotation curve in the solar interior (see Eggenberger & al. 2005).