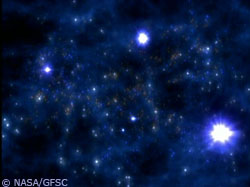 The effects of rotation are numerous and at low metallicity may lead to a drastic revision of the classical picture. For instance, we have shown that the first massive star generations probably contained a high proportion of fast rotators. This seems to be required for explaining the high N/O ratio observed at the surface of very metal-poor stars (see Chiappini & al. 2006). Such fast rotation may lead for the most massive stars to strong mass loss through the effect of reaching the break-up limit and through surface enrichment by rotational mixing in CNO elements. This last feature might increase the opacity at the surface and trigger strong mass loss through radiation driven stellar winds. The mass lost is enriched in newly synthesized elements, in particular in helium and CNO elements. Thus such stars enrich their surrounding in a very peculiar manner. This is particularly true if the stellar remnant is completely swallowed by the black hole. In that case, the winds would be the sole contribution of these stars to the chemical enrichments. Interestingly, the composition of the wind ejecta present many similarities with the abundance pattern observed at the surface of extremely metal-poor C-rich stars, supporting the view that at least part of them could be formed from such ejecta.

A grid of metal-free stellar models is being computed by Sylvia Ekström, who has started her PhD in September 2004. In addition to this, further computations will be made in order to explore the following questions: