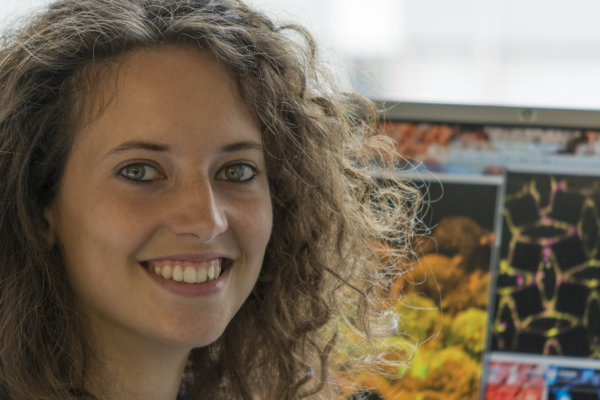 The aim of my project is to study cell adaptation to external geometrical constraints. To investigate this, I grow epithelia on in vitro 2D+ scaffolds and dynamic substrates. The latter is a technique that has been developed in collaboration with the Institute of Materials Science in Mulhouse, based on PDMS self-rolling substrates (A. Egunov et al., Soft Matter, 2016). This system allows me to control epithelium curvature once the cell monolayer is formed, similarly to what happens in vivo during development. To quantify epithelial monolayer adaptation, I measure cell shape and tissue reorganisation. With these experimental setups, I want to understand stress dissipation and tissue adaptation in organogenesis.

During my bachelor and master in Physics at the University of Torino (Italy) and one year as Erasmus student at the University Joseph Fourier in Grenoble (France) I had the opportunity to develop my interest for physics applied to live science. I did a joined PhD between two CNRS labs in Grenoble under the supervision of Catherine Villard (Néel Institute) and Alice Nicolas (Laboratory of Technologies of Microelectronics, LTM). I worked on primary brain cell growth and response in in vitro controlled systems, focusing on neuronal polarization and glial cell sensitivity to mechanical properties of their environment. I am a Post-Doc in the Roux Lab since February 2015, working on epithelium mechanics.