A new paper of the Gonzalez-Gaitan lab in Nature 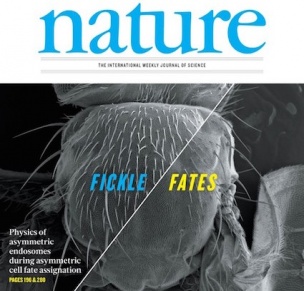 When sensory organ precursor (SOP) cells divide, they do so in an asymmetric manner. After division Sara endosomes end up mostly in one of the daughter cells. This segregation however only happens at the end of cell division. By recording thousands of dividing SOPs and employing advanced methods, such as calculating average cells, single particle tracking and time-resolved density plots, we devised a physical model that describes these observations very well.

The paper can be found here, together with a news and views article by Cayetano Gonzalez.

Our article has been picked up by several news websites and has already been tweeted more than 50 times on the first day of publication.