Cell-autonomous Mechanisms of Sensing and Defence against Mycobacteria Infection

Our major aim is to understand the integration of cell-autonomous pathways that sense and respond to various stimuli related to the presence of intracellular pathogens, and apply the knowledge to unravel the fundamental and evolutionarily-conserved mechanisms that gave birth to innate immunity (Boulais et al, 2010; Dunn et al, 2018). To this end, we use the genetically and biochemically tractable Dictyostelium discoideum as a model organism (Cardenal-Munoz et al, 2018). This amoeba is a professional phagocyte very similar to mammalian phagocytes of the innate immune system in morphology and behaviour (Dunn et al, 2018), but which is ethically un-concerning, allowing significant progress to further the 3Rs cause.

Phagocytosis is an ancestral eukaryotic process that allowed key innovations during evolution. Phagocytic protozoan such as amoebae internalise bacteria as a source of nutrients, while multicellular organisms use phagocytosis as a defence mechanism to kill microbes and, in higher organisms, initiate a sustained immune response. This is the reason why mechanisms of recognition, signalling and killing are surprisingly conserved throughout evolution. Therefore, because of its easy tractability, D. discoideum has emerged as a powerful and experimentally versatile model host organism.

Our initial work concentrated on the proteomic characterisation of phagosomal components (Gotthardt et al, 2006), as well as on the molecular and functional dissection of the role of actin and class I myosins in the formation and closure of the phagocytic cup (Dieckmann et al, 2010), and in the flux of membrane during maturation and recycling from endosomes/phagosomes. The projects also included other major regulators of the specificity and efficiency of membrane transport such as the Rab GTPases and the Exocyst tethering complex (Essid et al, 2012), as well as the EHD and Dynamin proteins (Gopaldass et al, 2012) and the WASH complex (Carnell et al, 2011). Our recent work in that field led to the confirmation that D. discoideum uses chemical warfare to restrict and kill phagocytosed bacteria. Recently, we showed that zinc is delivered to phagosomes by fusion with ‘zincosomes’ of endosomal origin, and that elevated zinc corresponds to faster killing of food bacteria (Barisch et al, 2018). Our data confirm that zinc poisoning is an evolutionarily conserved process and might act in concert with other killing factors, such as phagosomal acidification, reactive oxygen species production, and deprivation or poisoning by other metals. On-going work reveals the role of zinc in restricting vacuolar and possibly cytosolic M. marinum at various phases of infection (Fig. 1). 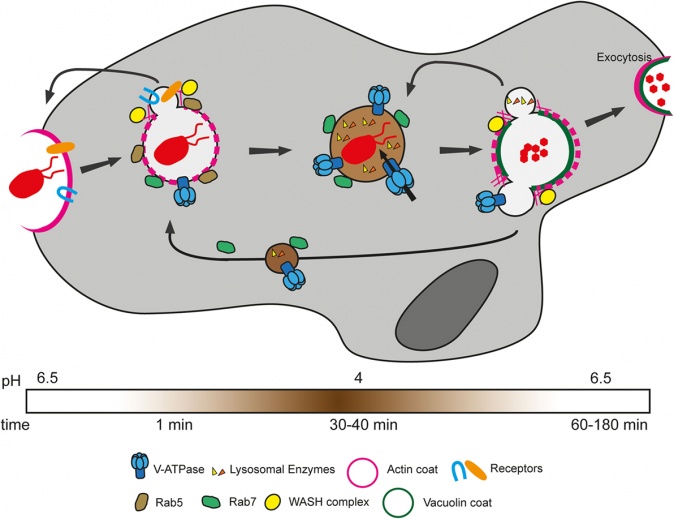 Figure 1. Phagosome maturation in Dictyostelium discoideum (from Dunn et al., 2018). Bacteria are recognized and sensed by various phagocytic and/or signaling receptors. This triggers signaling cascades that allow actin polymerization and deformation of the membrane to engulf the particle. After closure of the phagosome, bacteria are enclosed in an early phagosome, which gradually loses its actin coat and is characterized by the presence of Rab5. As early as 1 min after uptake, Rab7 is recruited to the phagosome, enabling fusion with lysosomes. Meanwhile, phagocytic receptors and plasma membrane proteins are recycled to the cell surface through actin polymerization induced by the WASH complex through Arp2/3 activation. The proton pump vacuolar ATPase (V-ATPase) is also acquired early in the maturation, ensuring rapid decrease of the luminal pH. Lysosomal enzymes, comprising proteases, are acquired in subsequent waves of delivery and function at low pH to degrade bacterial components. After about 40 min, the V-ATPase and lysosomal enzymes are recycled by the WASH complex in separate waves of recycling. Finally, non-digested bacterial remnants are expelled by exocytosis.

In the last decade, the group has firmly established D. discoideum as a powerful host model system to study infection and dissemination of pathogenic mycobacteria (Hagedorn & Soldati, 2007). Mycobacterium tuberculosis, M. marinum and M. leprae utilise common virulence strategies to invade phagocytes of the innate immune system, manipulate their otherwise bactericidal phagocytic apparatus and increase the success of cell-to-cell transmission (Hagedorn et al, 2009). Such powerful virulence strategies provide a plausible scenario to explain the continuous and unrivalled prevalence of tubercular mycobacteria in human and animals. Because of the danger and difficulties to work with the deadly M. tuberculosis, in recent years M. marinum has emerged as a strong alternative model for tuberculosis research. This fish pathogen is the closest relative to the tuberculosis group of mycobacteria and provides a powerful model to study the pathogenesis of tuberculosis in genetically tractable 3R model organisms, such as Drosophila, zebrafish and amoebae (Fig. 2). 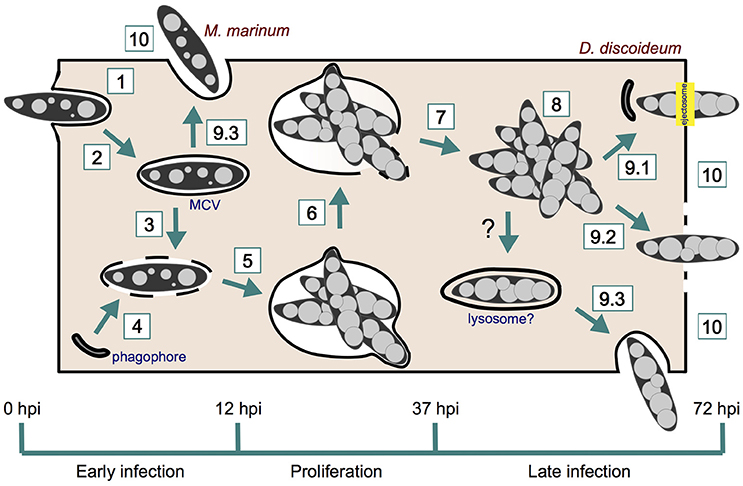 Figure 2. M. marinum infection course in D. discoideum (from Cardenal-Muñoz et al., 2018). M. marinum is phagocytosed by D. discoideum (1) and rapidly manipulates its phagocytic pathway to reside within a replicative niche (2). The ESX-1 secretion system of M. marinum perforates the MCV (3), which induces the recruitment of phagophores for membrane repair (4). M. marinum proliferates within its MCV (5), which finally breaks (6) and release mycobacteria to D. discoideum cytosol (7). Bacteria continue growing in the host cytosol (8) prior to egress by ejection (9.1), lytic death (9.2), or exocytosis (9.3). Phagophores are also recruited to the site of ejection for plasma membrane repair. Recapture into lysosome-like compartments may precede late exocytosis. However, this has not been shown yet in D. discoideum. Early exocytosis (9.3) can be induced upon starvation. Intercellular dissemination occurs after M. marinum release from the amoeba (10).

We discovered that both M. marinum and M. tuberculosis can escape from their vacuole into the cytosol, where autophagy serves as a control mechanism to restrict bacterial proliferation. In fact, our most recent contributions are the first demonstration that autophagy has a dual role in containing and repairing membrane damage at the Mycobacterium compartment and the plasma membrane (Cardenal-Muñoz et al, 2017), and that the ESCRT pathway does also contribute to the early repair of small wounds in the compartment membrane (López Jiménez et al, 2018).

Recent evidence also demonstrates that M. marinum, like M. tuberculosis, is able to use fatty acids derived from lipid droplets (Barisch et al, 2015), but using genetically engineered host mutants, we revealed that it can also use membrane phospholipids, an up to now unrecognised mechanism, and that storage of neutral lipids does not necessarily induce bacteria dormancy (Barisch et al, 2017), which contradicts previous observations in the field.

At the end of the 48 hours infection cycle, cytosolic M. marinum is ejected from the cell through an F-actin structure that spans the plasma membrane, which we named the ejectosome (Hagedorn et al, 2009; Gerstenmaier et al, 2015). Ejection is crucial for the maintenance of an infection and is a concerted process that requires both host and pathogen factors. We propose that this specific strategy evolved as a necessity for the release of a cytosolic pathogen in a mutually beneficial manner.

Our work also did set back a billion years ago in evolution the date of the invention of another specific innate immune strategy, the formation of DNA-extracellular traps (NETs). This extraordinary phenomenon was discovered in neutrophils, and showed that pathogens too big to be engulfed are trapped and killed extracellularly during NETosis. It is important to remember that D. discoideum is a social amoeba that is usually studied in its proliferative, “macrophage-like” form, but when food is exhausted, starvation induces a differentiation cycle that leads to the formation of a multicelllular life form, a slug of about 100,000 cells, which will ultimately give rise to a fruiting body, a mass of spores on top of a cellular stalk (Fig. 3). We demonstrated that during this multicellular phase of the D. discoideum life cycle, Sentinel cells patrol the slug body to scavenge and discard invaders using NETs (Zhang et al, 2016). This highlights that D. discoideum is capable of generating a rudimentary but highly conserved innate immune system (Zhang & Soldati, 2016; Dhakshinamoorthy et al, 2018). 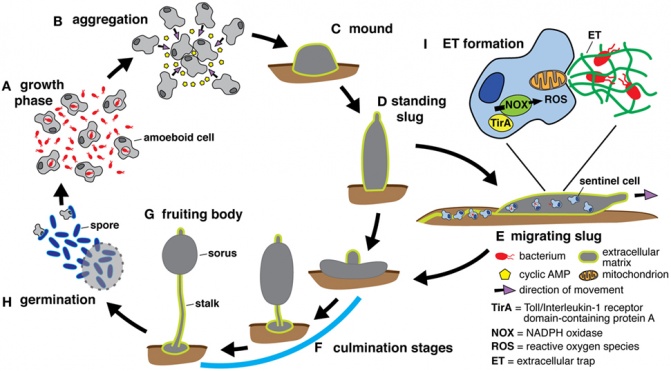 Figure 3. The Dictyostelium discoideum life cycle includes multicellular stages (from Dunn et al., 2018). (A) During the growth phase of development, amoeboid cells feed on bacteria and replicate by binary fission. The development cycle is initiated upon resource depletion, and aggregation occurs when starving cells secrete cyclic AMP to recruit additional cells (B). The aggregating cells organize to form the mound stage enclosed within an extracellular matrix composed of cellulose and mucopolysaccharide (26) (C) and continue to develop into the standing slug (D). Depending on its environment, the standing slug either falls over to become a migrating slug that moves toward heat and light (E) or proceeds directly to the culmination stages (F) that ultimately produce the fruiting body, which consists of a spore-containing structure, the sorus, held aloft by a stalk of dead cells (G). Spores are released from the sorus and germinate into growing cells (H). Under optimal conditions, the developmental cycle takes around 24 h. If the slug forms underground, it migrates toward the surface to maximize spore dissemination. To protect itself from infection during migration, the slug possesses a rudimentary immune system comprising phagocytic sentinel cells. These cells move throughout the slug, take up bacteria and toxins, and are shed along with extracellular matrix as the slug moves (E). In response to bacteria, sentinel cells release extracellular traps, derived from mitochondrial DNA, via an unknown mechanism involving NADPH oxidase (NOX)-generated reactive oxygen species (ROS) and TirA, a soluble protein containing a toll/interleukin 1 receptor domain (I).

Besides these significant milestones in the fundamental understanding of the complex relationships between the bacterium and its host, we have pioneered the use of the D. discoideum – M. marinum infection model to perform medium-throughput phenotypic screens to identify anti-infective compounds. We progressed from the proof of concept (Kicka et al, 2014) to the establishment of a robust screening system to identify new anti-mycobacterial compounds from smart proprietary chemical libraries (Kicka et al, 2018; Slepikas et al, 2016; Van Voorhis et al, 2016), as well as from natural plant extracts used in traditional medicine (Diop et al, 2018; Diop et al, 2019). This line of interdisciplinary and collaborative research initiated in my group almost ten years ago has recently culminated in the publication of a breakthrough study in which we scored the anti-infective activity of the compounds from the GlaxoSmithKline TB set (Trofimov et al, 2018). These 177 compounds had been identified as potent antibiotics against M. tuberculosis and M. bovis BCG, from a total of 2 million compounds, and offered “for free” as part of the Open Source Drug Discovery strategy.  We were the first to submit these promising compounds to an in vivo infection system, and were thus able to reveal that only 5 to 10% of them were able to combat the growth of M. marinum inside its phagocytic host, being a macrophage or an amoeba.  This attrition rate is unfortunately almost the rule and has already sanctioned vast high-throughput screening campaigns against M. tuberculosis and other pathogens. Therefore, our studies reinforce the concept that amoebae represent a simple, powerful and 3R-compliant model system for the phenotypic screening of anti-infective compounds.