A wax shield to conquer the Earth

Seeds have recycled a plant protection mechanism, the cuticle, to withstand terrestrial aggressions

Having emerged late during evolution, seeds have transformed many plants into miniature travelers, contributing greatly to their colonization of terrestrial habitats. Researchers at the University of Geneva (UNIGE), Switzerland, have just discovered one of the keys of this success: the cuticle. Present as a thick waxy layer in the seed coat and composed of cutin - a type of fatty acid -, the cuticle increases seeds’ viability, their resistance to reactive oxygen species, and contributes to maintaining their dormant state. Seeds have thus recycled an ancient terrestrial plant protection mechanism that allows their leaves to be covered with an impermeable film preventing excessive transpiration. The results are published in the journal PLoS Genetics. 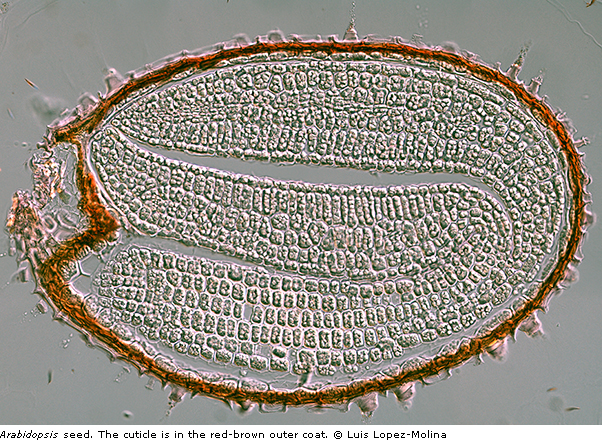 Plants have devised a great survival tool: the seed. The embryo contained within, dormant and protected by a resistant coat, can travel long distances and wait for favorable conditions for germination. Thus, plants having acquired this advantage, occurring late during evolution, were able to easily colonize new habitats.

The multiple functions of cutin

The seed must remain in excellent condition, sometimes for many years, until it receives the green light to germinate. Once the process begins, the young seedling becomes very vulnerable. The team of Luis Lopez-Molina, professor at the Department of Botany and Plant Biology of UNIGE’s Faculty of Science, Switzerland, has been interested for a long time in the mechanisms controlling germination, arguably the most critical decision in the life of a plant: “We have discovered that the genes involved in the synthesis of cutin, a waterproof substance, are important for the maintenance of dormancy in seeds of Arabidopsis thaliana, a small plant widely used as a model organism to study plant biology. We wanted to understand why and determine which role cutin plays in the seed.”

Cutin is the main component of the cuticle that covers plants’ leaves. This waterproof film, a very ancient adaptation to terrestrial life, prevents excessive water loss and protects plants against insects and various pathogens. “We have revealed the presence of a waxy layer in the envelope surrounding the embryo in mature seeds, similar to the cuticle of leaves, but ten times thicker”, says Sylvain Loubéry, a researcher at the University of Geneva.

In collaboration with biologists from the Pierre and Marie Curie University in Paris and the University of Fribourg (Switzerland), the scientists tested mutant Arabidopsis seeds displaying a defective synthesis of cutin. “These seeds are unable to properly suppress their germination when they are dormant, because their coat cracks prematurely. They also have a reduced capacity to be dormant, low viability, and a very limited resistance to reactive oxygen species, aggressive chemicals produced in particular under the action of UVs”, detail Julien De Giorgi and Urszula Piskurewicz, researchers from the Geneva team and co-first authors of the article.

These experiments therefore provide evidence that maintaining the thick layer of cutin exactly as such, which results from an ongoing dialogue between different molecular actors, is essential to the survival and propagation of the seed. Plants have thus recycled one of the first adaptations related to life on dry land, the cuticle, by assigning it these new roles to perfect their last major innovation: the seed.