During embryonic life, the emergence of body limbs is orchestrated by a family of architect genes, which are themselves regulated by two DNA structures. While the first presides over the construction of the arm, the other takes over for the development of the hand. Geneticists from the University of Geneva (UNIGE) and the Swiss Federal Institute of Technology in Lausanne (EPFL), Switzerland, show that the same architect proteins, called HOX13 and acting together, complete the formation of the arm and initiate that of the hand, allowing to connect the two processes. As for the region located between the arm and the hand, it escapes the attention of the two regulatory DNA structures, thus providing an opportunity for the wrist bones to develop. The study is published in the journal Genes & Development. 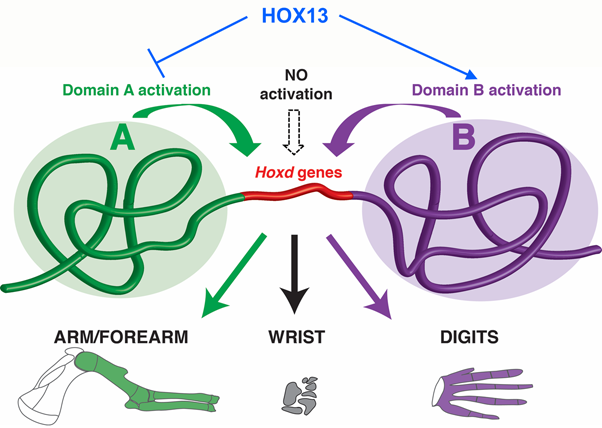 The construction plan of mammals takes only a few days to be organized within the embryo. The appearance of limbs is coordinated by a family of ‘architect’ genes called Hox, aligned on chromosomes according to the order of the structures that will emerge: first, the components of the shoulder, then those of the arm and, finally, the hand. Denis Duboule, a geneticist at UNIGE and EPFL, has shown that these Hox genes are themselves controlled by two large adjacent DNA regions: "the genesis of the arm is supervised by a first ‘control tower’ located at one extremity of the Hox gene cluster. The second control tower, situated at the other extremity, then directs the formation of the hand."

Accomplish two things at once

But how is the articulation between the two parts formed? "We knew that the wrist originates from an area at the interface of these two regulatory spheres, and we wanted to understand how the transition between the arm and the hand occurs", says Leonardo Beccari, a researcher of the Geneva Group and co-first author of the study. In collaboration with biologists from the University of Nagoya, Japan, the researchers found out the specific role played by architect genes called Hox13: "these genes, which are involved in the development of the hand, produce proteins that inhibit the functioning of the control tower of the arm. This allows to complete the first phase of construction and to begin that of the hand", explains Nayuta Yakushiji-Kaminatsui, researcher at EPFL and co-first author of the article.

By eliminating the function of Hox13 genes in mouse embryos, the scientists indeed demonstrated that the arm continues to extend, without the hand being formed. Thus, the same HOX13 architect proteins, acting together, complete the formation of the arm and initiate that of the hand. This genetic switch, which allows the establishment of a clear boundary between the two large construction domains of limbs, constitutes a mechanism to prevent the two production lines from mixing.

During the growth of the limb bud, the transition between the arm and the hand takes place in an intermediary region that escapes the two regulatory controls. This area will generate small bones that will form the wrist.