A network of crystals for long-distance quantum communication

Quantum physic can guarantee that a message has not be intercepted before reaching its destination. Thanks to the laws of quantum physic, a particle of light – a photon – can be in two distinct states simultaneously, comparable to a coin thrown in the air, which is virtually both head and tail before reaching the ground. Like when the coin is grabbed, this superposition of states is destroyed as soon as it is read. This peculiar feature allow one to detect an evil eavesdropper when sending a message. However, this technique is so far limited to short distances. In order to extend the reach of these quantum communications, researchers from the University of Geneva (UNIGE), Switzerland, have demonstrated a novel protocol based on a crystal than can emit quantum light as well as store it for arbitrary long times. This work, to appear in Physical Review Letters, paves the way for a future quantum repeater. 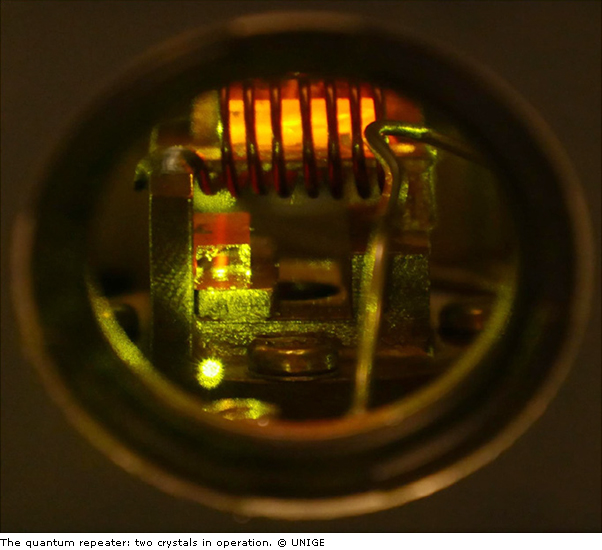 Quantum superposition is one of the fascinating features of quantum physic. “In order to test the security of communication link, we can use particles of light, photons, onto which we encode quantum bits (analogous to the bit used in computing) ”, explains Cyril Laplane, a researcher in the Group of Applied Physics at UNIGE. He continues: “We then take advantage of the properties of quantum superposition, allowing the photon to be simultaneously in two states, to test the security of a communication link”. Indeed if the photon is intercepted and read, the superposition of states is lost, only one of the two states remains. Hence, the recipient can know if the message has been intercepted.

The need for quantum repeaters

Since this protocol relies on the use of single photons, there is an unneglectable chance of losing the particles when they propagate in traditional communication links such as the optical fiber. This problem becomes more and more critical with the distance. In order to communicate over long distances, one would need repeaters, which amplify and rebroadcast the signal. It is however impossible to use such procedure in quantum communication without destroying the superposition of states. Physicists need to build a quantum repeater able to store the dual character of the photon but also produce such state, a true challenge.

A crystal based solution

To build a quantum repeater, scientists have investigated a lot atomic gases, which usually require heavy experimental apparatus. “We are using a crystal capable of storing quantum state of light. It possesses the advantage of being relatively simple to use with potential for very long storage times”, clarifies Jean Etesse, a co-author of the paper. These crystals are able to absorb light and restore it later, without reading the information encoded on it. Furthermore, they can generate single photons and store them on demand. Another major asset is their potential for miniaturisation.

Since the crystal is the source and memory for quantum information, it simplifies the protocol for quantum repeaters and lays the foundation of a quantum internet. Physicists at UNIGE are already working on the creation of an elementary link of quantum communication using a repeater.